The Conservation Safari Camps Making An Impact In Kenya 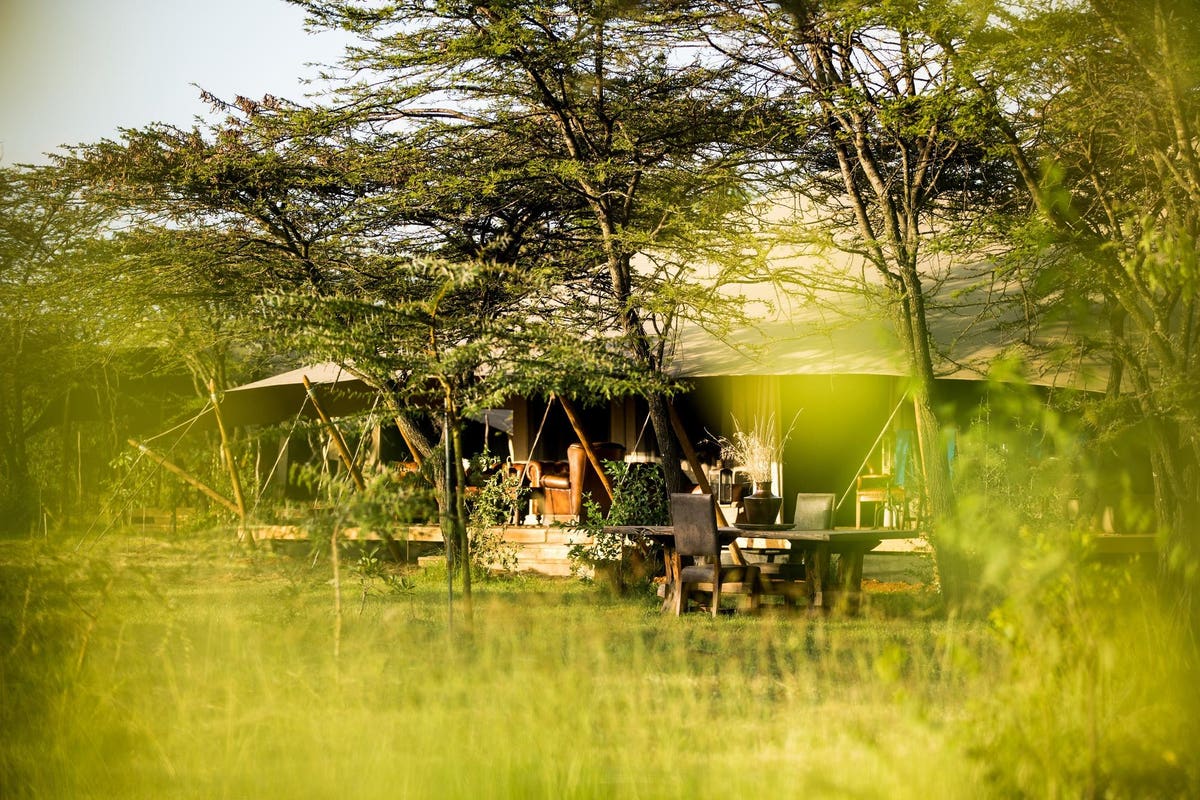 Great Plains is heightening the positive impact it has on the environment and communities surrounding its luxury eco-camps in wildlife-rich pockets of the African landscape.

Bordering Kenya’s wildlife-rich Maasai Mara National Reserve, within its neighbouring conservancies, Great Plains hosts guests in small eco-camps that are designed to immerse luxury travelers in the surrounding environment while also carrying out conservation initiatives and supporting the Maasai communities who own this land.

For guests, days at each of these exclusive camps are spent venturing out on early morning drives as big cats roam the land before retreating to the shade from the sun, having surprise breakfast and lunch set-ups in the wilderness and watching the resident wildlife at sunset before returning to the camp for drinks by the fire and a lantern-lit dinner under the stars.

During the pandemic lockdowns, the co-founders of Great Plains — award-winning filmmakers, photographers, conservationists and National Geographic Explorers-at-Large, Dereck and Beverly Joubert — set about making improvements to their existing camps, Mara Plains and Mara Nyika camps as well as the seasonal Mara Toto migration camp, while also building the brand-new Mara Expedition Camp from ground up.

This was achieved while keeping all staff on board despite travel shutting down and continuing projects, which have included the construction of a bridge enabling children to get to their local school more easily, in the community. The Jouberts are now putting plans in motion to create more Great Plains properties, starting with a new expedition camp near Great Plains’ Ol Donyo Lodge in Kenya’s Chyulu Hills.

Dereck explains: “We don’t need more camps right now from a business perspective but we are building camps primarily because so many good people in the industry were let go. As a community effort, we have to create jobs and we can do that with Great Plains by building camps.”

With Kenya’s borders open once again, travelers can stay right now at the newly renovated six-suite Mara Plains Camp, which is a Relais & Châteaux member, benefitting from new raised walkways, with a bridge now crossing over the river to its standalone honeymoon suite, and the creation of the luxurious two-bedroom Mara Plains Jahazi Suite.

The summer-2021-reopened camp hosts guests in an open-sided living and dining area with well-stocked bar, a wine cellar, boutique and library, all decorated in the traditional safari aesthetic that’s seen throughout all of Great Plains’ properties – Carved Lamu doors that have been sourced from Zanzibar provide a dramatic entrance to expansive suites with Moroccan lamps hanging from the canvas ceilings, copper bathtubs positioned for views over the wilderness and large prints of the Jouberts’ own wildlife photography displayed on the walls.

Located in the 100,000-acre Olare Motorogi Conservancy on the edge of the Maasai Mara reserve, Mara Plains is an easy drive from its sister camp, Mara Nyika, which is set within the 50,000-acre Naboisho Conservancy. First launched in 2020, this six-suite camp is welcoming many of its guests for the first time since travel opened up, as well as now benefitting from additional developments undertaken in recent months across its accommodation, in which each suite is made up of three adjoining canvas tents, and shared spaces including an open-sided living area, wine cellar, library and boutique.

The four-suite Mara Toto Camp, which is a seasonal camp that’s used exclusively from May to October for the Great Migration, has also just emerged from a complete renovation and along with Mara Plains and Mara Nyika, this is now joined by the newest of the area’s Great Plains’ camps, Mara Expedition Camp, which overlooks a valley of Maasai Mara National Reserve and is a base for exploration of both the Maasai Mara and more private 70,000-acre Mara North Conservancy.

At Mara Expedition Camp, just six standalone tented suites are joined by a central dining, bar and lounge area, an open-fronted kitchen for interaction with the chef and a kitchen garden, with a pool being created for guests who want to spend time at the camp during the hottest hours of the day.

A stay at each of these Great Plains camps in the Maasai Mara and its surroundings can be arranged including airfare from the U.S. through Mango African Safaris, with internal flights also taken care of and nights in the capital spent at the luxurious boutique property, Hemingways Nairobi.

On top of renovating these camps and carrying out conservation and community projects in the areas surroundings its camps in Kenya, as well as Botswana, and now Zimbabwe with the recent debut of Tembo Plains, the Jouberts led more far-reaching initiatives during the pandemic through the safari company’s charitable arm, Great Plains Foundation.

Project Ranger was established in March 2020 to raise funds for wildlife monitoring, surveying and anti-poaching operations across Africa in response to the fact many African rangers had been furloughed.

“It’s so important to keep the conservation alive but at the same time for the income to be going through the communities,” explains Beverly. “If there isn’t that hand in hand partnership with each other we’re going to lose those wilderness areas. We believe that collaboration is the only way forward.”

The Best Museums To Visit In Portland, Oregon

Support For Ukraine, Iran And Anti-Gun Violence Measures On Display At Various Fairs

Best Things To See, Eat And Do In Kingston, Canada’s First Capital