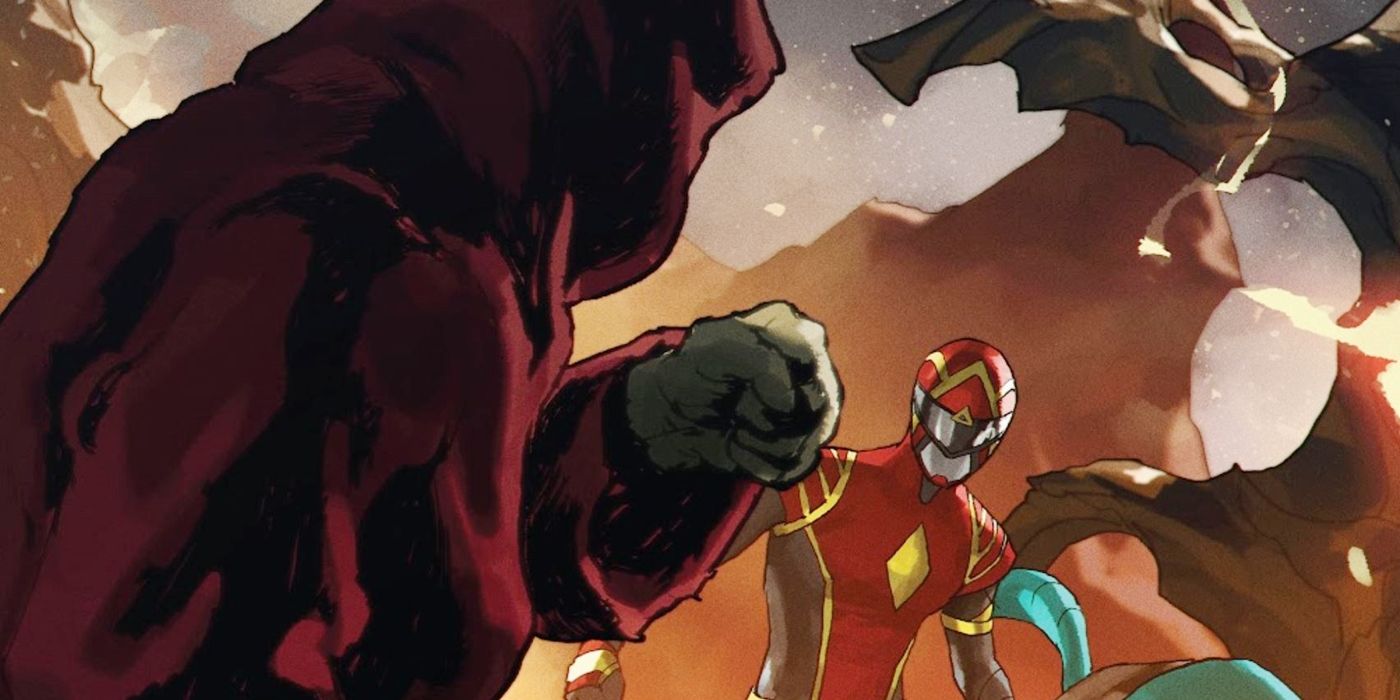 In recent months, the Power Rangers have overcome the strongest enemies they have ever known. The aftermath of their victory, however, has hardly been something to celebrate, with both teams of Rangers having broken up to take on a multitude of various threats and missions across the cosmos. For Jason and Yale, that means scouring a world once thought lifeless only to uncover one of the most iconic heroes in franchise history. Not only has Andros finally stepped into the Omega Rangers’ world, he’s poised to change everything they know about it.

While the Mighty Morphin team back on Earth has split up to protect their world and find a new Command Center, the Omega Rangers have returned to Safe Haven to continue protecting the cosmos. As seen in the pages of Power Rangers #18 (by Ryan Parrott, Marco Renna, Walter Baiamonte, Sharon Marino, Sara Antonellini, and Ed Dukeshire), this includes scouring a seemingly abandoned planet after both an S.O.S. message and what looks like a global attack. When Jason and Yale arrive, they are quickly assaulted by Xurix warriors intent on ravaging the world they have conquered. Thankfully, a mysterious new ally emerges to help the Omegas defeat the Xurix horde, and he just so happens to be a Ranger as well. In fact, Andros is one of the most well known Power Rangers of all time, even if his comic book counterparts don’t realize it yet.

First introduced back in 1998’s Power Rangers in Space, Andros was the brother to series antagonist Astronema, formerly Karone. As children, Andros and Karone were separated, with the latter being kidnapped and raised by Ecliptor. While Astronema would eventually become one of the most prominent members of Dark Specter’s army, Andros himself went on to become the Red Ranger in the hopes of reuniting with his sister some day. In the comics, Astronema’s origin story has been shown as nearly identical to that of the original television series, putting Andros’ own in very similar territory.

Unfortunately, that alone doesn’t shed much light on how he came to be where he is now, nor on where the rest of his team might be. Though the Space Rangers were already a part of the comics before and during the events of Shattered Grid, Andros and his allies haven’t been seen since reality was reset following Lord Drakkon’s defeat. As evidenced by his Astro Morpher, Andros is clearly still the same Ranger that he was, although he might not necessarily be the same person. Battling Darkonda’s Xurix horde would imply that Andros is continuing his mission to rescue Karone, as well as that he is on the right track. On the other hand, there is no indication as to how long he has been fighting this battle, what losses his team has incurred, or how they might have affected him along the way.

With any luck, this Andros won’t turn out to be too far removed from his small screen counterpart, no matter how much mystery surrounds his reintroduction to the world of the comics. It’s hard to imagine any version of Andros being anything other than a boon to whatever team of heroes he is on, yet there has never been any shortage of shocking turns where the Omega Rangers are concerned. Hopefully, discovering another lost Ranger won’t be the latest dire mistake that the heroes have made. Then again, if Andros really is going to lead them into a fight with any part of Dark Specter’s army, teaming up with him could be the worst decision the Omegas have made no matter how genuinely good this version of him truly is.

John Dodge has been an avid consumer of comic books and nerd culture for as long as he can remember. An expert on competitive gaming and obscure kids shows from the 80’s and 90’s, John has far too many opinions about Beetleborgs for someone in their thirties. You can find him occasionally discussing them over on Twitter at @JohnJDodge.