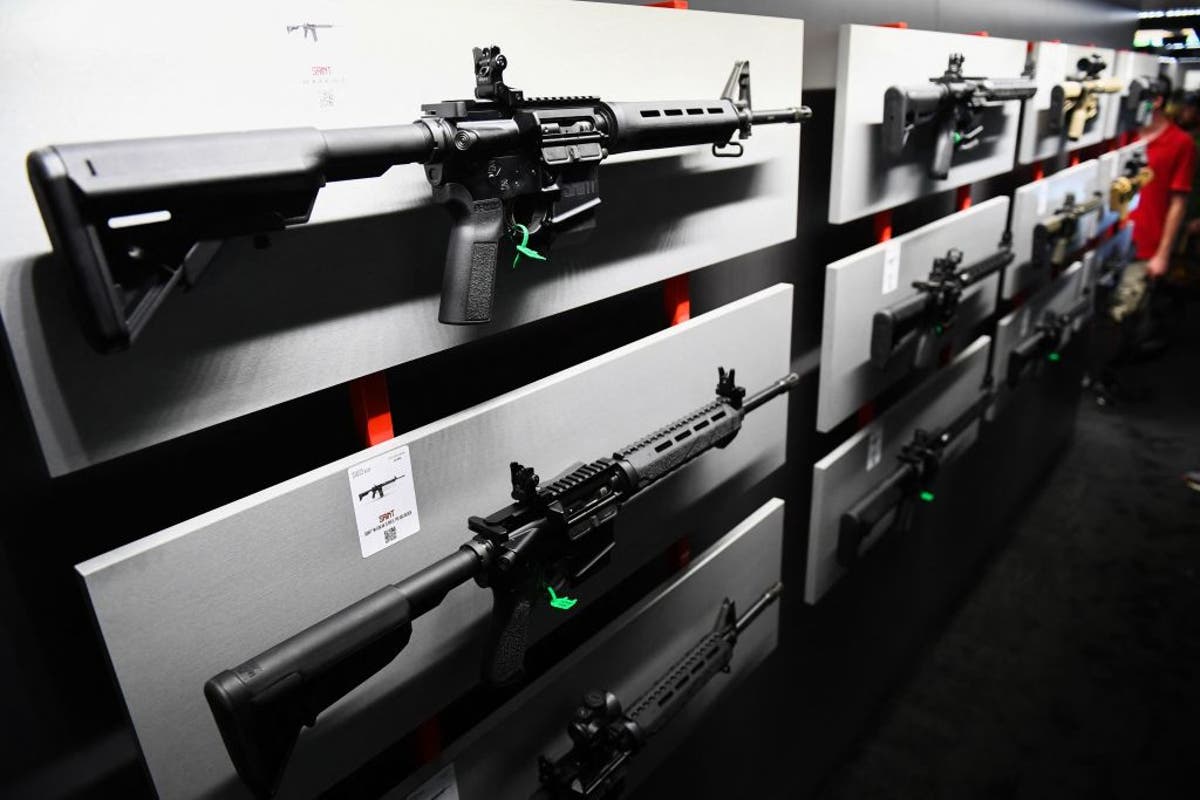 Nearly 20 years after AR-15-style rifles returned to the market, the powerful weapons are back in the spotlight as the United States once again debates the role of assault-style guns in society.

There are now roughly 20 million of them in the US, according to a 2020 survey from the National Shooting Sports Foundation, a gun industry trade group.

That’s a staggering number of weapons in circulation for a design that was made largely illegal in 1994, when lawmakers on Capitol Hill united with a Democratic president, Bill Clinton, to ban a number of AR-15-style models from the the market. The Clinton-era ban lasted until 2004, when it lapsed amid a tide of growing gun rights sentiment spurred by the National Rifle Association (NRA) and other political and cultural forces.

The rifle enjoys widespread use in shooting sports by firearm enthusiasts who enjoy the model’s semiautomatic design and high capability for customisation; one owner described it as “less a model of rifle than it is an open-source, modular weapons platform that can be customized for a whole range of applications” in a 2016 op-ed for Vox.

Across the American south and southwest it sees use for animal control against such threats as feral hogs and coyotes, and it is also used in many areas as a hunting weapon. The AR-15 itself is described as easy to load, fire and generally manage compared to other designs, and for those reasons both law enforcement and private gun enthusiasts often find it suits their needs.

“It’s kind of the standard, de-facto rifle now,” Evan Daire, a gun range worker, told NBC News in 2017. “No matter what role you’re looking at, it pretty much fills that role.”

The firearm is probably one of the most well-known models, culturally speaking, across America and enjoys bumper-sticker levels of support in rural communities and conservative areas generally across the US. Uvalde, Texas sits in the shadow of San Antonio and is one of those smaller towns where many residents enjoy shooting sports and own one or more firearms.

“It’s just fun,” Uvalde resident Rene Nolasco told the Texas Tribune of owning an AR-15, speaking after the massacre in his town. “I know what kind of power my AR-15 has and I know how to use it.”

Its involvement in mass shooting attacks has also become a fixture of debate since the ban lapsed. The AR-15 has been used in numerous high-casualty mass shootings, including the recent shootings in Uvalde, Buffalo and Tulsa, as well as other incidents in past years including the massacre in Las Vegas, the shooting at a Texas Wal-Mart in 2019 as well as the Sandy Hook attack and the Marjory Stoneman Douglas High School shooting in Parkland, Fla. There are many other examples.

Some critics question why a semiautomatic rifle is necessary for hunting or other shooting sports, and say it should be taken off the market in favour of alternatives for those uses that cannot be used to cause mass casualties in such a short time, as the AR-15 can.

“I have hunted all my life. I still hunt with my son. But an AR-15 is not for hunting; it’s for killing,” then-Senator Bill Nelson of Florida said about the gun in 2018, shortly after the Parkland shooting.

The View’s Whoopi Goldberg shared a similar sentiment this week after the Uvalde and Buffalo shootings.

“Listen, this AR-15’s got to go,” she said during Tuesday’s episode. “I don’t care, NRA. You’ve got to give that gun up. You can have your other yeehaw guns, whatever you want. But the AR-15 is not a hunting gun. It is not a gun where you’re going to go out and shoot your dinner.”

Others, even gun owners, are reexamining the weapon’s usage in light of the recent killings.

Richard Small, a self-described lifetime National Rifle Association member and Republican, told CNN in an interview from San Antonio that he made his decision to give up his AR-15-style rifle after he and his wife visited the scene of the Uvalde shooting to pay their respects.

“At that moment I pretty much started questioning myself, the fact that this weapon that I know about…I started second-guessing myself, like, ‘why in the world would you have such a weapon?’” he told the news network.

With top Washington Democrats like Bernie Sanders, Dianne Feinstein and other backing calls for the weapons to be once again removed from the civilian market, the spotlight is back on assault weapons and the companies that are responsible for the modern-day state of gun ownership in America.

In that regard, weapons styled in the AR-15 model inhabit a unique place in American culture as well as the overall firearms market. Few products in American history have gone from near-total illegality to market saturation in such short a time; the popularity of the AR-15 style exploded in the US in the years after the ban on its sale lapsed, helped in no small part due to the War on Terror and mass media.

The weapon’s name itself has even become a meme among gun control supporters on social media, who frequently insist that the “AR” in “AR–15” stands for “assault rifle” rather than the ArmaLite company name in an effort to troll gun ownership supporters on the right who often complain that city-dwelling liberals know little about the weapons they seek to ban.

The ban on assault-style weapons including the AR-15 expired in 2004, during the height of popular sentiment for America’s military efforts in Iraq and Afghanistan, where conflicts quickly popularised both the military-grade style of weaponry and tactical gear as well as the desert-style camouflage that surged onto the scene of casual military memorabilia and gear collections.

It was at this time that the AR-15 popularity surged as well, due in no small part to the revolutionary marketing efforts of firearm manufacturers who recognised an opportunity to capitalise on America’s sprawling military campaigns in the Middle East.

At the forefront of this marketing effort was Daniel Defense. A US-based firearm manufacturer responsible for the popular DDM4 AR-15-style rifle used in the Uvalde shooting, Daniel Defense has been at the forefront of the gun industry’s shift over the past few decades towards marketing to younger males including teenagers. The company has had its brand and weaponry showcased in the mega-popular Call of Duty franchise’s 2019 offering Modern Warfare, and the company’s ads frequently are designed to appeal to a younger audience.

One ad posted on the company’s Twitter page just days before the Uvalde shooting even showed a parent supervising as a young child looking to be only a few years old holds an AR-15 rifle.

Now after the weapons’ usage in a number of mass shooting incidents with particularly-shocking casualty numbers there’s once again calls on Capitol Hill for AR-15s and other assault-style weapons to be taken off the market. In recent years that sentiment has been championed by the like of politicians including Beto O’Rourke, the bombastic Texas Democrat who declared during his 2020 bid for the presidency that “hell yes”, Democrats were aiming to confiscate assault weapons currently in the hands of private owners.

Others have called for the sale of such weapons to be halted going forward.

But 18 years after the assault weapons ban expired, there is now a growing consensus among serious gun control activists that an effort to pull existing weapons out of the hands of private owners has become totally unrealistic, given the saturation of firearms including assault weapons in America.

“You can’t do that, [confiscate] 12-15 million assault weapons,” gun control activist Tom Mauser, whose son was murdered in the Columbine attack, told The Independent in a recent interview. “That’s ludicrous.”

Even with the ban’s successful legislative history, the extent of assault weapon ownership in America and the resistance of gun rights supporters in Congress have all but eliminated an assault weapons ban as an immediate possibility.

Efforts aimed at even raising the age of eligibility for assault weapon ownership from 18 to 21 are being met with skepticism, despite clear evidence that the vast majority of school shooting suspects are below that age threshold.

And that campaign to rein in assault weapon ownership is continually under fire from the US conservative right, which has circled its wagons in the days since the twin shootings in Uvalde and Buffalo against any form of gun ownership regulation going forward.

One of the most vocal opponents of such measures in recent days has predictably been Fox News’ Tucker Carlson, who disputed that the AR-15 was a “weapon of war” despite firearm manufacturers including Daniel Defense selling automatic versions of the rifle to militaries and police forces around the world. The design itself is a semiautomatic cousin styled after the fully automatic M16, which is widely used by military forces, and is not in fact designed as a hunting rifle as many shooting enthusiasts have long argued.

“Democrats, Joe Biden, supporters in the media talk about banning the AR-15—the so-called ‘weapons of war,’ which are not, in fact, used by any military,” Mr Carlson said on his show’s Tuesday evening broadcast, omitting the reality of the AR-15’s widespread use among militaries when designed as a fully automatic weapon as well as the fact that the weapon’s original development was indeed marketed to the US military as a lighter alternative to the M16.

Despite the falsehoods about the weapon being spread by gun rights supporters and their recent use in major gun violence episodes, mainstream Democrats including Joe Biden appear to have an appetite for pursuing a ban of the weaponry, if not an avenue for success. Leaders of the party including Chuck Schumer have called on their supporters to show up at the polls in November with the hopes of pursuing stronger legislation as a bipartisan group of senators meets over the June recess to discuss red flag laws and other compromise legislation.

But the Democratic Party failed to make headway on the issue the last time it had clear control of the Senate as well, including in the beginning of the Obama presidency when the party enjoyed a brief filibuster-proof majority in the Senate and still failed to pass legislation addressing gun violence.

Now with Uvalde and Buffalo already beginning to fade into memory it remains to be seen whether any federal legislation addressing gun violence will make it to the president’s desk at all, and an effort to seriously address the AR-15’s persistent presence in mass shootings looks as far away as ever.

In a statement earlier this week, President Joe Biden laid out his philosophical case against the weapons after returning from the scene of the horrifying elementary school massacre in Texas.

“It makes no sense to be able to purchase something that can fire up to 300 rounds,” said the president.. “The idea of these high-caliber weapons — there’s simply no rational basis for it in terms of…self-protection, hunting”.

Pain, protests and Casper’s in Ruud health – day 13 at the French Open