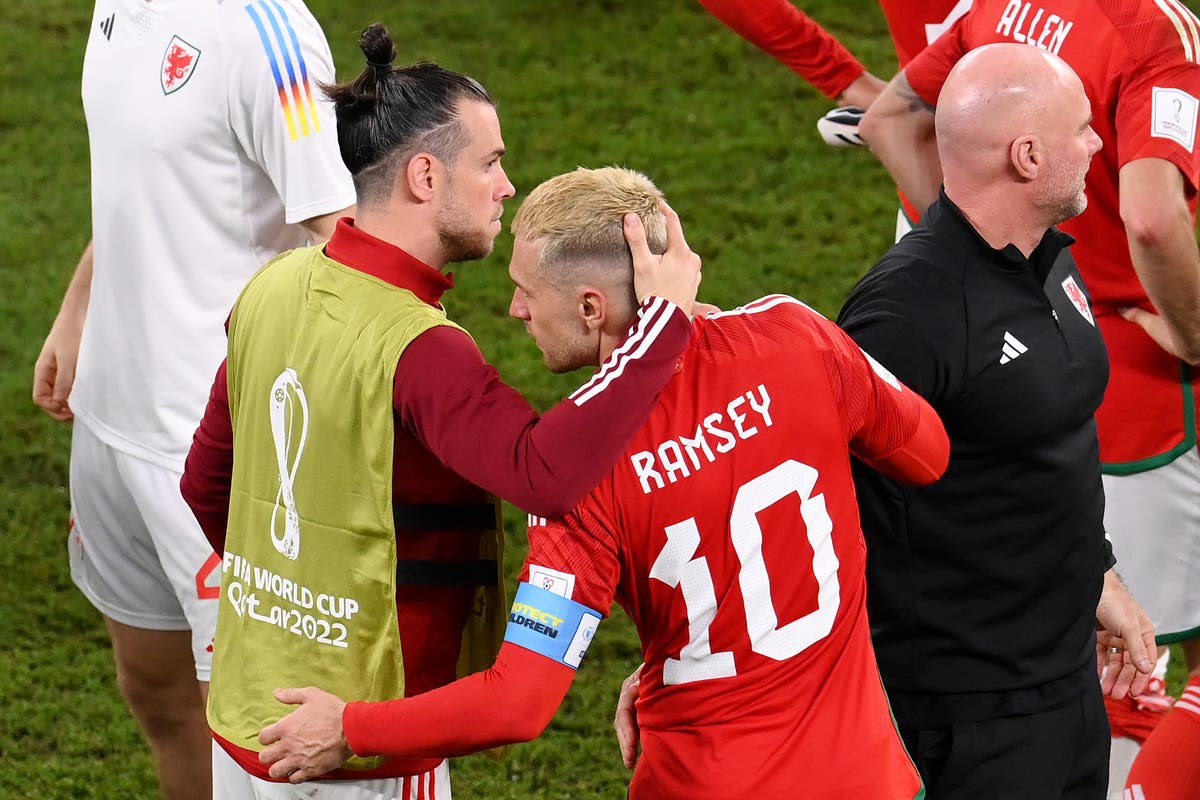 The defeated Welsh players stood facing their supporters as the Red Wall sang Hen Wlad Fy Nhadau a final time. The fans acquitted themselves superbly in Qatar. The players, less so. Robert Page admitted Wales had not really shown their true colours often enough. They go home with one point, one goal and as perhaps the poorest of the European contingent.

“There were patches when we did show what we are all about, but they were too few and far between,” accepted full-back Connor Roberts. “It’s a little bit disappointing, but for a lot of the players – myself included – I am ecstatic to be able to say that I represented my country at a World Cup.”

There was defiance in some of the rhetoric. “The next accomplishment and achievement for Wales men’s team is to get out of a group at a World Cup,” Roberts added. In reality, and while the World Cup is expanding to include 48 teams in 2026, it will be an achievement simply to be there.

As Gareth Bale, whose international career dates back to 2006, reflected: “If you’d told us two years ago that we would play in a World Cup, we’d have all pinched ourselves. It’s been difficult at this tournament, we haven’t played very well. We didn’t live up to our expectations.”

The young midfielder Ruben Colwill had been optimistic. “You always have to think the sky is the limit,” he said. “We wanted to get out of the group.” Wales did in the 1958 World Cup and Euro 2016 and 2020, but any prospect of a sequel disappeared in injury-time against Iran, perhaps with Wayne Hennessey’s kung-fu kick on Mehdi Taremi a few minutes earlier. But a wretched performance never merited the draw they almost got. Many can be proud that they played in a World Cup, as Roberts said, but fewer of how they played.

Bale at least had the magical moment of his penalty against the United States. He bowed out with seven touches against England, substituted at half-time when Page deemed him even less fit than he had been before. He was the static talisman and, with Aaron Ramsey completely ineffectual, it posed the question if Bale and Ramsey has to become Bale or Ramsey. Certainly, the captain is keen to carry on. “I’ll keep going as long as I can and as long as I’m wanted,” he vowed.

For Page, the former Port Vale and Northampton manager, difficult decisions beckon in March’s Euro 2024 qualifiers. He succeeded before the World Cup as a likeable figure who forged a bond, but he may have to bench one of Wales’ greatest ever players. He has high-energy players, but also one who barely moves.

Albeit in difficult circumstances, his decision-making felt flawed in Qatar. Even his best choice, bringing on Kieffer Moore in a game-changing substitution against the United States, was rectifying the initial error of omitting the target man. Choosing a three-man midfield for the first two games of Ethan Ampadu, Harry Wilson and Ramsey offered the worst of both worlds: Ampadu had to do the work of two men while the other pair offered little off the ball. The Fulham man is not really a central midfielder but, for all the focus on Wales’ big two, other attack-minded players – Dan James, Brennan Johnson, Wilson – contributed too little.

Wales’ campaign came to look doomed by the hamstring strain Joe Allen sustained in Swansea’s 3-0 win over Hull in September. He made it back for the final 20 minutes against Iran, but in his absence, Wales had a void in the heart of the midfield. Allen has no real deputy; there is no conveyor belt of high-class midfielders in a country of three million people.

Time feels the enemy that Bale, Ramsey and Allen cannot beat, while Ben Davies will join the bracket of the thirty-somethings in April. “I know there are also a lot of players the right side of 30,” Roberts countered. Sorba Thomas, Ben Cabango, Colwill and Johnson, all 22 or under, ought to feature more soon. Ampadu, just 22, was perhaps Wales’ best player in Qatar. Rhys Norrington-Davies and David Brooks should be able to return to the squad.

But it is not just a case of managing the transition, of looking to a world when Chris Gunter is not a staple of every squad. The old guard were the premier talents; two, in particular, were the match-winners. Wales could configure a quick attack of James, Johnson, Brooks and Rabbi Matondo but it would be no guarantee of goals.

Look around their neighbours and they have ample evidence of what happens when smaller nations are deprived of special players. The Republic of Ireland’s last World Cup was in 2002, Scotland’s in 1998, Northern Ireland’s in 1986. Wales’ previous one was in 1958. If their next one is not for decades, they will have longer to reflect on the disappointment of 2022.