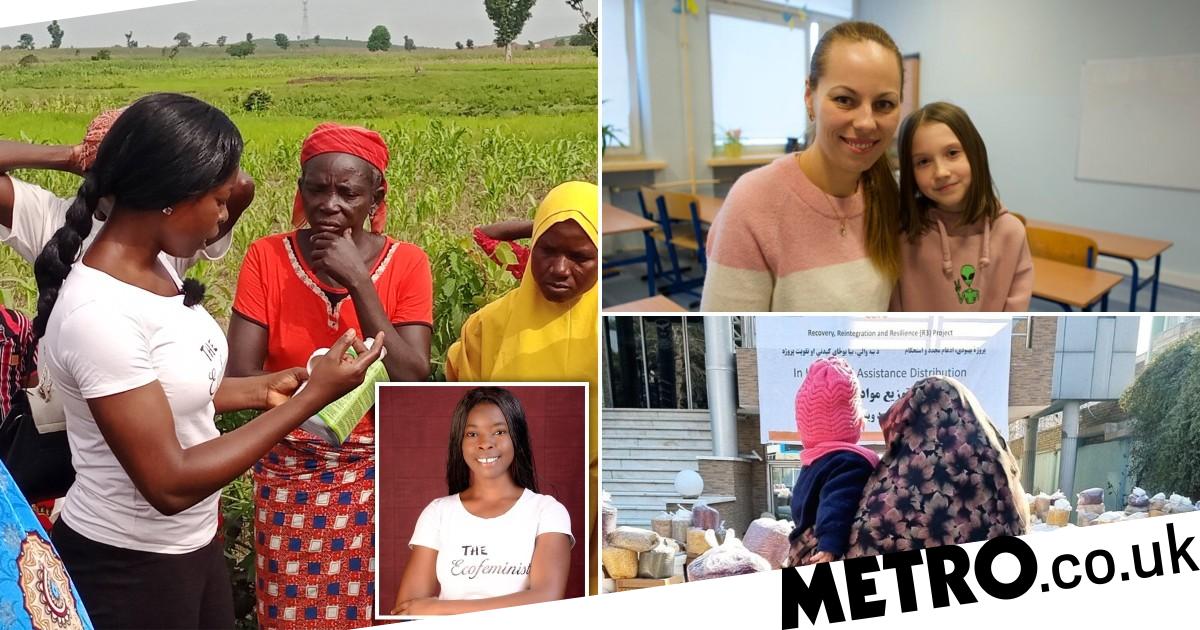 With the G7 Summit taking place next week, seven women from across the globe have written letters directly to world leaders, in a bid to highlight the different crises affecting them.

It comes at a time when despite disasters acutely affecting women and girls worldwide, women are wholly underrepresented in political leadership and decision-making positions.

Of 195 countries across the globe, only 10 currently have a female head of state, while just 13 countries have a woman head of government. Now, with the absence of Angela Merkel, this G7 will be the first summit without a female representative from a nation-state for 17 years.

In the letters, which have been coordinated by the global charity CARE International as part of their #ChangeTheStory campaign, world leaders are being urged to ensure that female voices are heard and that the perspective of women and girls are front and centre as they seek to address major global issues, such as climate change, war in Ukraine, food poverty and insecurity, economic injustice and gender based violence and discrimination.

Here, Metro.co.uk exclusively highlights three of the plights being shared with the Summit next week.

20 minutes after the bombing started, we were fleeing for our lives

Three months ago, I went for a morning run in my home city of Kyiv. That was the last time I would feel normality.

A friend called: “It’s happened – they are bombing Kyiv.” Within 20 minutes, I had my ten-year-old son, two cats, clothes and documents in the car. Fleeing for our lives.

My mum joined us, but dad stayed to defend his city. We left without him. We queued for hours at the border, reaching Moldova at 3am. The stress gave my mother heart issues, hospitalising her. The moment she was strong enough we continued 2,000km to Poland, where friends were offering help.

The people here are so open and friendly. One woman told us: “I have an apartment, you can live there. I will not take any money from you.” She came with mattresses, pillows and kindness. In the face of the very worst of humanity, we have found the very best here.

This is not only my story. So many Ukrainians have the same experience. The Polish people work hard, it’s not an easy life but they are ready to share everything with us.

I found a job working for CARE, helping other refugees. It gives me joy. We support them with food, clothes, shelter, education, jobs. 90% of Ukrainian refugees are women, most have children and some of the risks they face are unthinkable. Yet the women come together, helping each other and sending food and medical supplies to family and communities remaining in Ukraine.

It is not only men who are fighting – the women are in a battlefield of our own. The worry is exhausting, but we fight on. And we need your help.

Ukrainians will thank the world for the rest of our lives for their support. But the countries with the most refugees, countries along Ukraine’s border, are not the richest countries yet they have taken in most refugees – 3.5 million in Poland alone. The people have opened their hearts and homes, but they have needs too. I ask you, G7 leaders, to offer them more support.

Many Ukrainians are risking their lives, returning to Ukraine because of a lack of money. They can’t pay for accommodation, food, public transport. I understand why Poland can’t cover everything for so many. But support from other countries would make a big difference.

Please continue to support vulnerable refugees from Ukraine without existing support systems. I never thought I would be a refugee, but now I see the great need for relief for refugees worldwide, no matter which crisis they are fleeing.

As you gather for the 45th meeting of the G7, I want to ask you two things; how far have you gone in closing the gap between action and words? And how many women will this time sit at the decision-making table to ensure there is action on the crucial issues of our day?

Twelve years ago, at a United Nations climate summit in Copenhagen, you made a significant pledge – a promise of developed countries collectively providing US$100 billion a year by 2020 to developing nations, to help them adapt to climate change and mitigate further rises in temperature.

This promise has never been kept and more lives and livelihoods continue to be lost. From a recent IPCC AR6 Report, we know it’s getting worse.

In May 2021, you also launched the G7 Famine Prevention and Humanitarian Crises Compact promising about 8.5 billion dollars of aid to priority countries, including Nigeria. Today, aid agencies and governments of hunger affected countries struggle to know how much aid this Compact has really generated,

My name is Adenike Oladosu and I live in the Lake Chad area of Nigeria, where there are now 4 million people in need of food assistance. As the lean season begins, I am fearful of the tragedies and hardship that lie ahead.

As Lake Chad dries up, women have been forced into trading sex for fish to feed their families. Climate change exacerbates gender-based violence and sexual exploitation in my region. I see climate and gender injustices every day.

As the leaders of the richest nations and the biggest historic emitters of carbon, decisions at your table should consider workable solutions for the best interest of all. There needs to be a focus on Africa because millions of people are being displaced by climate change impacts and its interactions with other crises, which we are seeing through a stream of cyclones, droughts, floods & conflicts.

Do you have to wait to the tipping point at which it escalates into war before you act?

Women in regions like mine bear the brunt of the climate crisis, despite having the smallest carbon footprint. And when you, the G7, gather we hear only more promises and dialogues than action. I can tell you promises won’t save us from destruction.

Noticeably there is also a lack of women’s representation in parliament – it is 25.5% globally and a shocking 6% in Nigeria. Women need to be an important part of the decision-making process if we are to fight the climate crisis.

Power has been entrusted to men since the inception of these meetings, it’s now time for women to take a lead. Without a woman leader in the G7 nation states this year, ask yourselves how you are ensuring women’s voices are heard, when creating solutions for climate-changed induced crises?

No mother should have to put their children to bed hungry

Each week I watch as food prices soar. Conflict in our region and globally has disrupted our food supply, meaning the basics that we rely on are now completely unaffordable. Potatoes have doubled in price over the past few weeks and just one small packet of oil is now 50 Afghani (approx 45p).

I’ve always loved cooking and eating a good meal with family. But now I can barely put together a meal. I ration the oil as much as I can and reduce the portions I serve. But I often go without so my children and mother-in-law have enough to eat.

I have three children who haven’t seen their father in over two months. My husband could not find a job here and has been forced to look for work in Iran. It breaks my heart that my family can’t be together.

Food scarcity has already pushed us to crisis point. I now rely on the support of charities like CARE International. Without the food I get from them, I don’t know where I would turn to or how I would feed my family.

Tonight, I will cook bread for my children from the flour I received today, along with rice and red beans. But I truly fear for the coming months and the idea that I may have nothing to cook for my children.

When G7 world leaders meet, I ask that they think of families like mine.

No mother should have to put their children to bed hungry.

To read all seven of the letters being sent to the G7 Summit next week, click here.

*Name has been changed