“This fall Roe is on the ballot”: Can Democrats fire up their base on abortion rights or is it too late? 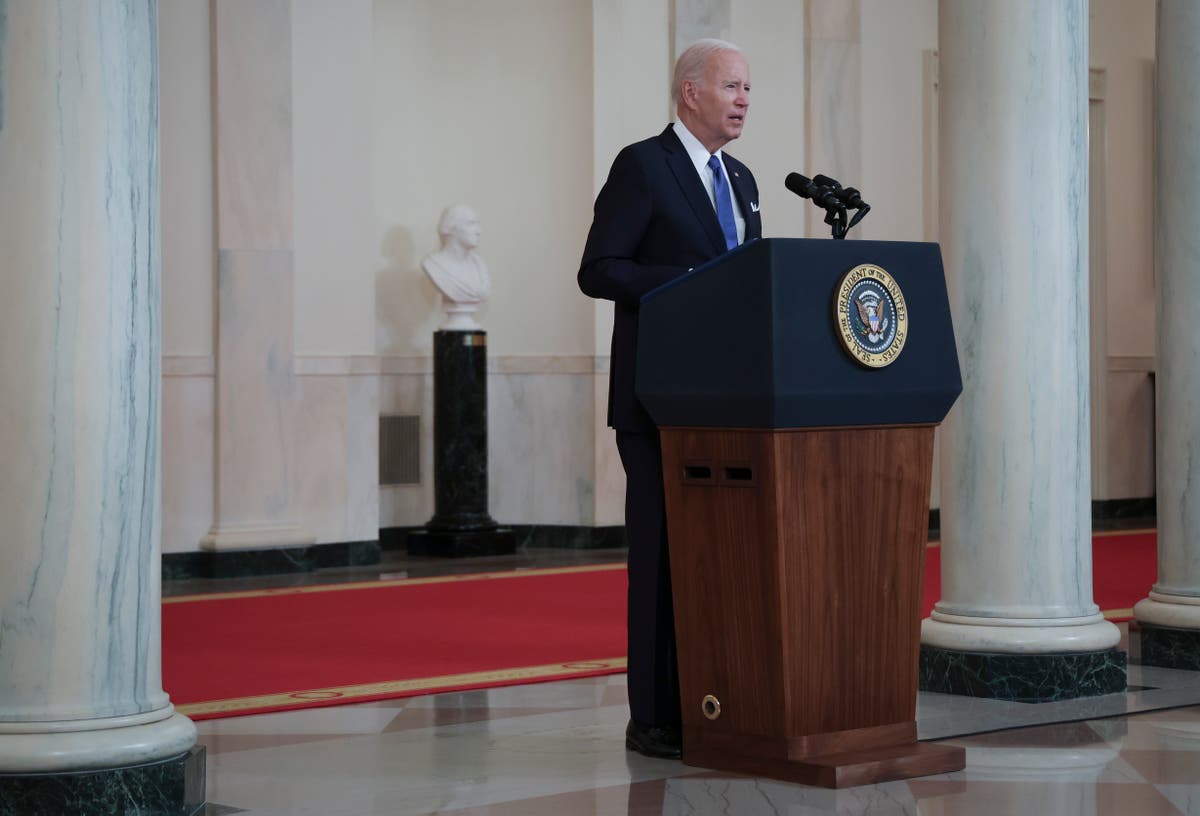 After the Supreme Court released its decision on Dobbs v Jackson that overturned Roe v Wade, the 1973 ruling that guaranteed the right to an abortion, president Joe Biden said that voters would have a decision to make.

For months, Democrats have been plagued by negative headlines about inflation and high gas prices. Virginia Governor Glenn Youngkin’s victory in November served as a bellwether that Republicans could win even in states Mr Biden dominated. A Politico/Morning Consult poll earlier this week showed that if the election were held today, 42 per cent of registered voters would vote for a Democrat while 42 per cent would vote for a Republican.

Democrats also risk losing as many as four Senate seats, in Nevada, Arizona, Georgia and New Hampshire, but have a good chance at flipping far fewer. Similarly, their efforts to codify the protections within Roe v Wade have come up short as Democratic Senator Joe Manchin of West Virginia opposed the Women’s Health Protection Act last month when the Senate brought it up for a vote.

And even then, he and Senator Kyrsten Sinema oppose getting rid of the filibuster, meaning that even though Democrats have 50 seats, with Vice President Kamala Harris serving as the tie breaker, they cannot pass any legislation to protect abortion rights.

But with the death of Roe, Democrats now have a reason to tell their voters that it is important to vote for Democrats to protect abortion rights. They have a reason to tell voters there is a need to keep the House of Representatives while on the Senate side, they can say they only need two more Senators to add to their majority to get rid of the filibuster and pass legislation to protect abortion rights.

“With so much at stake, it’s important that we communicate with voters how critical it is that they complete the entire ballot”, Laphonza Butler, the president of Emily’s List, told The Independent before the Supreme Court made its announcement. Ms Butler said that while Senate races are important, gubernatorial races and state legislative races also matter.

On Thursday, the House of Representatives were convening to vote on the bipartisan gun safety bill the Senate passed the night before. Democrats should have been celebrating but instead many expressed their dismay and their sorrow.

“I’m mad as hell and every woman and man who supports women should be mad as hell”, Representative Val Demings of Florida, who is running against Senator Marco Rubio in what is considered an uphill race given the fact Florida has moved rightward in the past decade.

“Marco Rubio believes there should be no exception for incest or sexual abuse”, she said. When he ran for president, Mr Rubio had previously said he had “never advocated” for exceptions for rape and incest.

“I think this decision will play a role in every election coming up”, Representative Jennifer Wexton told The Independent. In 2018, Ms Wexton flipped a district in Northern Virginia that includes many of the suburbs of Washington DC and was one of three women to flip a district in the Old Dominion State.

“Even people who themselves don’t believe in abortion, do not think that the government ought to make that decision for them”, Representative Jan Schakowsky of Illinois said. “And this is definitely going to be a central issue in the campaigns.”

But some Democrats hope that the end of Roe will also assist them in their primary challenges against male candidates. Wisconsin Treasurer Sarah Godlewski is the only woman running in the Democratic primary against incumbent Republican Senator Ron Johnson, who is up for re-election. Ms Goldlewski told The Independent that abortion rights have been a central tenet of her campign.

“It’s one of the reasons why I got in this race is that I was frustrated with how this was constantly being treated as an extra credit project or a political football”, she said, noting how some supporters have thanked her for talking about abortion rights.

But some question whether it will have any impact on the midterm elections.

“Will it change their mind? I kind of doubt it. The economic situation is so bleak”, Senator Josh Hawley of Missouri told reporters on a call. “I imagine that if abortion was not a top issue for you, this won’t change any of that.”

But Ms Butler said that voters will keep in mind how Democrats are working to both combat inflation and protect abortion rights.

“And I think as voters, they will be voting as whole people” she said. “I think that it is clear the party that is standing with the majority of the American people who are trying to do something who are putting forward solutions, who are passing legislation that speak to some of the most urgent issues of our time.”

On the inverse side though, many Democrats might also feel demoralised given that they see Democrats have both houses of Congress and the White House and have failed to pass legislation protecting abortion rights.

But Representative Alexandria Ocasio-Cortez said that it was important not to get discouraged.

“I completely understand and I am one of those folks who are disappointed and sometimes even demoralized about about about the limits of what has happened in the last two years”, she told reporters. “But that is also not a reason to give up. It’s not a reason to drop out.”

But Ms Ocasio-Cortez also said this was why she pushes the Democratic Party to be more supportive of abortion rights. Most recently, she endorsed Jessica Cisneros to run against incumbent Representative Henry Cuellar in Texas’s 28th district. The race went to a runoff and a recount and Mr Cuellar won narrowly with less than 300 votes.

House Speaker Nancy Pelosi and House Majority Whip James Clyburn both supported Mr Cuellar in his primary race despite his opposition to abortion rights. But Ms Ocasio-Cortez said the Supreme Court’s decision is why she supports primary challengers at times.

“Like this is this is why this is why we do this”, she said. “And this is why sometimes the isolation from the caucus and the targeting from leadership and all this stuff. That’s why it’s worth it.”

Why Chiefs will miss out on reported player target!