Thunder fever: Why thunderstorms can make hay fever worse – and how to cope 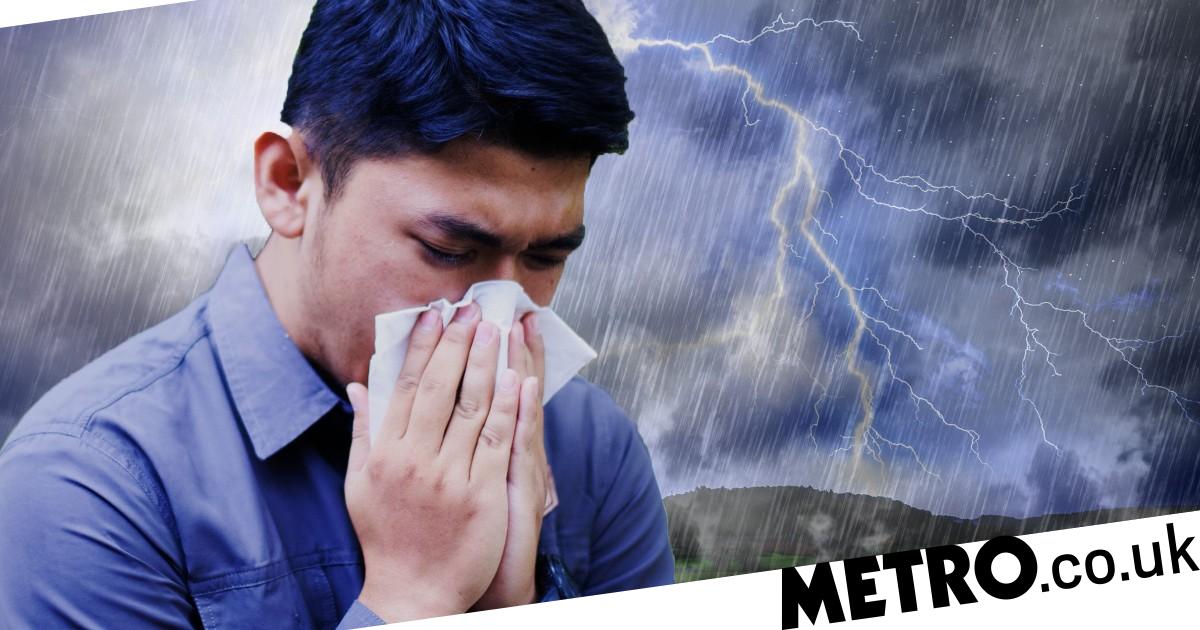 A combination of thunderstorms and high pollen counts can combine to create a phenomenon that is being called ‘thunder fever’.

Extremely high pollen counts have created a particularly challenging summer for those with hay fever.

Many sufferers have complained about challenging and aggressive symptoms since the UK entered the warmer months.

And while the number of pollen grains in the air isn’t especially noteworthy compared to previous years, experts say that the potency of these grains could be more intense this year due to the weather we’ve had in spring.

A warm and wet spring means there’s a chance that the developed pollen is particularly potent, even if the amounts aren’t dramatically different.

And another phenomenon known as “thunder fever” could worsen things.

What is thunder fever?

Although many people associate rain and thunderstorms with a reduction in pollen count, this doesn’t always happen. Thunderstorms can have the opposite effect – to make your hay fever far worse.

‘Thunder fever’, a phenomenon that occurs shortly before a thunderstorm, combines hay fever symptoms with asthma symptoms, such as a tight feeling in the chest, shortness of breath and wheezing.

Essentially it is an extreme version of hay fever.

In the summer, thunderstorms typically develop in the afternoon when the sun heats the air near the ground. Moisture and warmth are crucial to thunderstorms.

The air just before a storm is often more humid. ‘According to a report in The European Respiratory review, humidity breaks pollen grains into smaller allergenic particles,’ explains Max.

‘So one pollen grain becomes two, which raises the pollen count. But these new pollen grains also turn into a kind of ‘super pollen’ which appears to be more allergenic than normal pollen, causing more severe reactions in sufferers’

Coupled with the unseasonably strong winds, we have been experiencing this year. This can exacerbate hay fever symptoms.

‘Storms cause great movements in the air, bringing pollen grains down which might have otherwise risen above head height out of harm’s way, and whipping up pollen grains near the ground,’ says Max.

‘To make matters worse, farmers will often work hard to get their fields harvested before a storm which further increases the level of allergens in the air.

‘And don’t think that living in the city will spare you from this either; the thunderstorm can pick all this pollen up and carry it for miles before dumping it at head height in the city.’

But what is hay fever?

The medical term for hay fever is known as allergic rhinitis. It is triggered when our immune systems mistake airborne particles or allergens, like pollen, for harmful pathogens.

It usually causes inflammation of the airways, causing constant sneezing and watering eyes.

Hayfever is a type of allergy that occurs in response to specific allergens and typically lasts for months.

Grass pollen season usually follows a pattern – peaking once in the first half of June and then again in early July.

Hay fever will last for weeks or months, unlike a cold, which usually goes away after 1 to 2 weeks, according to the NHS website.

How to treat hay fever

If possible, try to avoid –

What can you do about thunder fever?

‘If you are affected by this phenomenon, there are some simple things you can do to reduce the effects,’ Max says.

‘One of the best ways of dealing with the pollen is to prevent it from getting into your body in the first place.

‘Creating a physical barrier to the pollen with an organic allergen barrier balm such as HayMax around the nostrils and bones of the eyes helps keep pollen out.’

‘When pollen counts are very high, one hayfever product might not be enough to help,’ he explains. ‘Create a kit combining natural and conventional products and remedies.

‘Pharmaceutical remedies are generally based on either antihistamines or steroid nasal sprays.

‘Whilst natural remedies are based on physical preventative measures, immune boosters or natural antihistamines.

‘Many of these remedies can be complementary to each other. So you can create your own, bespoke kit that suits your specific needs.”

However, Max warns that people need to be careful.

‘Never take two antihistamines together, never take two steroid nasal sprays together, and consult your pharmacist or doctor about it if you are already taking another medication.’

You can check the pollen levels across the UK using the Met Office pollen forecaster.


MORE : Why is my hay fever so bad this year?