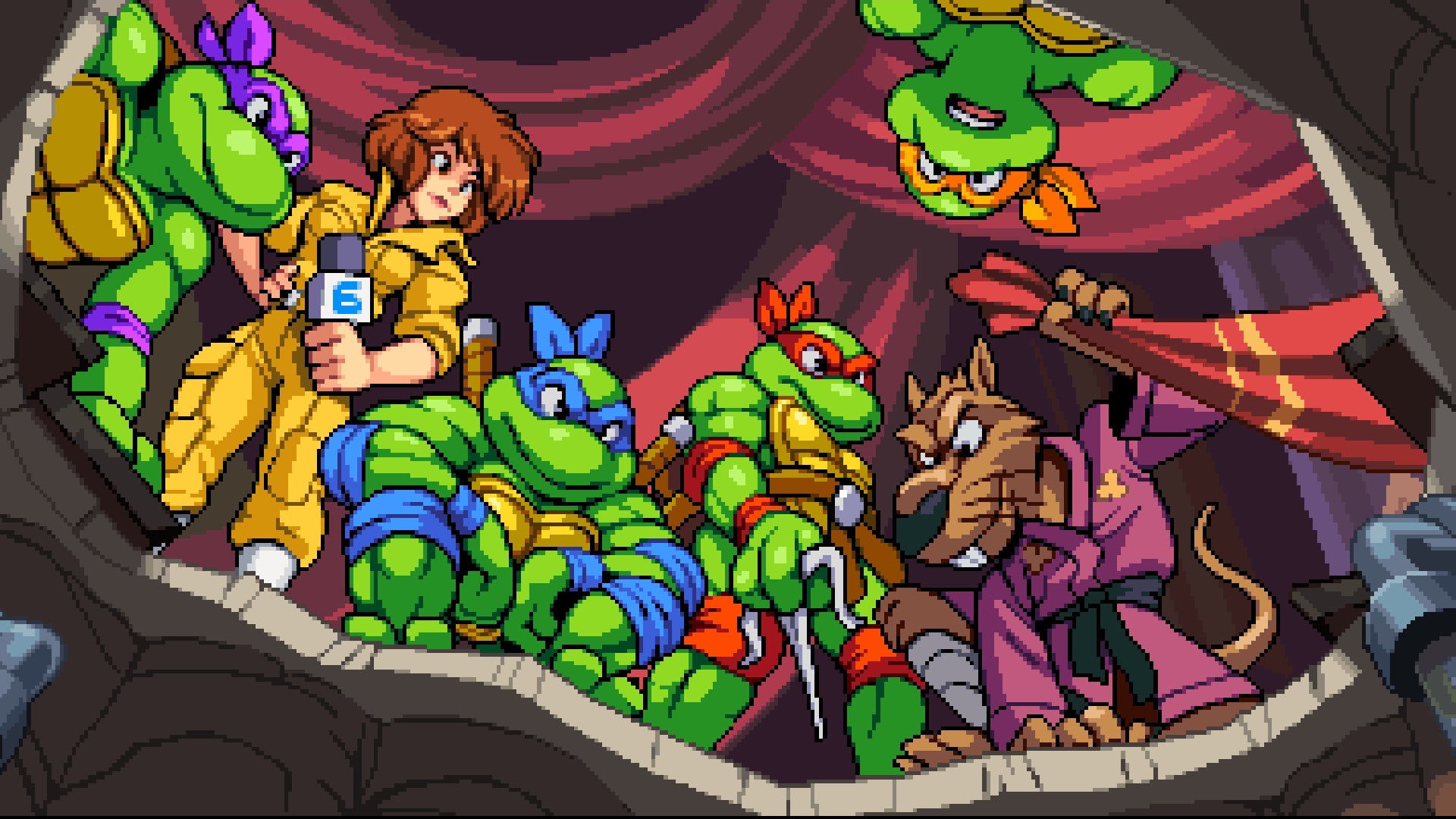 With the release of Teenage Mutant Ninja Turtles: Shredder’s Revenge, we’ve got a modern day recreation of a beloved 80’s cartoon with all the trimmings. A nice 16-bit art style, some retro arcade beat ‘em up gameplay, and the modern refinement that shreds unnecessary frustration present in some of the real oldies. All in all, I like it a lot!

To go alongside the review, I sat down with publishing and marketing director at Tribute Games, Eric Lafontaine, to discuss what the team wanted to achieve going in, recreating the TMNT humour, and bringing the intricacies of the cartoon to a modern platform.

VG247: What are the main things you want to nail when making a TMNT game?

Lafontaine: All of the Tribute staff are retro fans – we grew up with the Turtles 80’s cartoon. It’s kind-of Tribute’s mission to pay homage, while also adding that modern twist to games we develop. We knew we needed to treat the IP with tremendous respect, and it was important to us that we recreated how it felt to play those games from that era. It would have been too easy to develop a totally retro game, so we had to remove some of the frustrations and bring this old school experience forward for an audience of modern gamers.

I don’t like the term “fan service”, but we wanted to put as many references and as many tropes from the Turtles franchise as possible. We wanted to include as many references to the 80’s cartoon as we could, but also Turtles in Time, old school beat ‘em ups, the old arcade game, and also some never-produced collectors toys that were floating around in the wild. Every Turtles aficionado out there will find something specifically for them in our game.

We also wanted to make sure we developed a game for everyone, not just hardcore fans of the genre. It can be a very hard game if you choose to make it so, but it can also be a super easy fun party game if you want it to be. Those points were our main goals when creating Shredder’s Revenge.

VG247: How did you go about characterising the turtles, Foot Clan, and just the game as a whole in a way that fit in with the source material?

Lafontaine: A lot of references, and animation that lean heavily towards the personality of each of the characters. So like Raphiel is a bit more groggy, a bit darker than the other turtles. So the slides, the running state, all of that will look more aggressive so you get the characterization when you’re actually playing the game. The taunts, too – one of my favourite animations is Donatello’s taunt where he crouches and pulls out a handheld console (it’s a Gameboy). That’s also a reference back to the consoles of the 80s and the 90s! The animations and little touches like that go a long way.

What’s interesting is when you get to characters like Splinter – who we don’t see actually fight that much in the 80’s cartoon. So we had to take some liberties when developing attacks, which meant we had to look at references in the cartoon like him quickly hit wooden boxes in the intro. That’s a quick snippet that we then as game designers identified as something we could recreate – so we added that as his basic special attack.”

VG247: With the 80s cartoon so central to this game’s identity – how often was that material consulted on during development?

Lafontaine: Our narrative designer listened to every episode – all of them. When we had a small break we were watching it all together, we were also showing moments from episodes to each other. We would joke that all of the research we had to do for the game was done 30 years ago – we just had to get official approval from the IP holder! We knew what we wanted to share in theory, but we had a lot of fun pitching ideas based on the show.

From the beginning when one of our co-founders, Jean-Francois Major, approached Nickelodeon, he ended up sending three or four pitches in total, he was always selling the idea of a classic beat ‘em up based on the cartoon. Obviously he and the other co-founders had worked on Scott Pilgrim vs The World: The Game at Ubisoft, as well as the previous TMNT Ubisoft beat ‘em up game. So we had a good track record behind us, and we were lucky, which I think secured us the IP.

VG247: Super serious question. Since this is a TMNT game, I need you to speak for the entirety of Tribute Games and tell me what the best kind of pizza is.

Lafontaine: Oh my god. I have to speak for the whole studio?

Lafontaine: Since I’m marketing manager, I need to have a business affair kind of answer. I’m going to say Cheese pizza. It’s a really politically safe answer, so I’ll go with cheese. Personally though, I’ll say either Anchovies or Hawaiian. Yes, I know pineapple and ham on pizza shouldn’t exist, but I love it (laugh).”

VG247: What’s the office split on pineapple on pizza?

VG247: Talk to me about the Ghostface Killa and Raekwon track! How did that come about, and why did that fit?

Lafontaine: So obviously Mike Patton from Faith No More sang the original theme in the game – it was kind of a surprising choice for the fans, and it’s likely that a lot of people wouldn’t know them or Faith No More. We could have made a more obvious choice, one that was more geeky, but it was our idea to go wider and to go with a juggernaut from the 90s.

Obviously, we wanted to have another collaboration with a music artist, and another original song in game. We wanted something a bit more close to the game, related to ninjitsu and ninjas, and Wu Tang made sense! So on the Dotemu side, they reached out to Ghostface Killa and Raekwon’s management, and they struck a deal.

It was a really fun process – at first we didn’t even know it would have been possible. T. Lopez who worked on Sonic Mania worked on the beat is brilliant, and we sent that over with an idea of what sort of direction we wanted to go in to the pair. It, uh, had to be E for everyone! Nickelodeon was approving so it had to have family friendly lyrics, but they sent us some ideas for the verse and after a few corrections and a second version we got the final version!

When we announced that to collaborators and partners they couldn’t believe it – and we’re super happy with how it came out. They’re obviously TMNT fans, and we’re happy they said yes.

VG247: One thing that stood out to me is the humour of it; seeing Foot Ninjas cooking live in the TV studio they took over or sleeping on benches. Why was it important to bring forward that humour here?

Lafontaine: It’s really a Tribute Games thing to have that humour in the background, to always be tongue in cheek. It’s a video game, we’re not taking things too seriously. Also it’s TMNT – so it’s always at least a little bit funny. We like all versions of the Turtles obviously, but the funny tropes you saw in the original cartoon really resonated with us, and we wanted to explore it way more.

We had so much fun going through and adding that TMNT humour throughout. In that first stage for example, the TV studio, there are four Foot Clan ninjas typing at desks, but one of them is missing a keyboard. That came about from one of the animators just throwing around ideas while we were making it, and by taking out the keyboard it was immediately way more funny.

There’s always a Foot Clan doing something wacky – it’s important to us to add humour since it makes the whole experience more fun. And for younger gamers, they’d have a whole lot of more fun with it thanks to that inclusion.