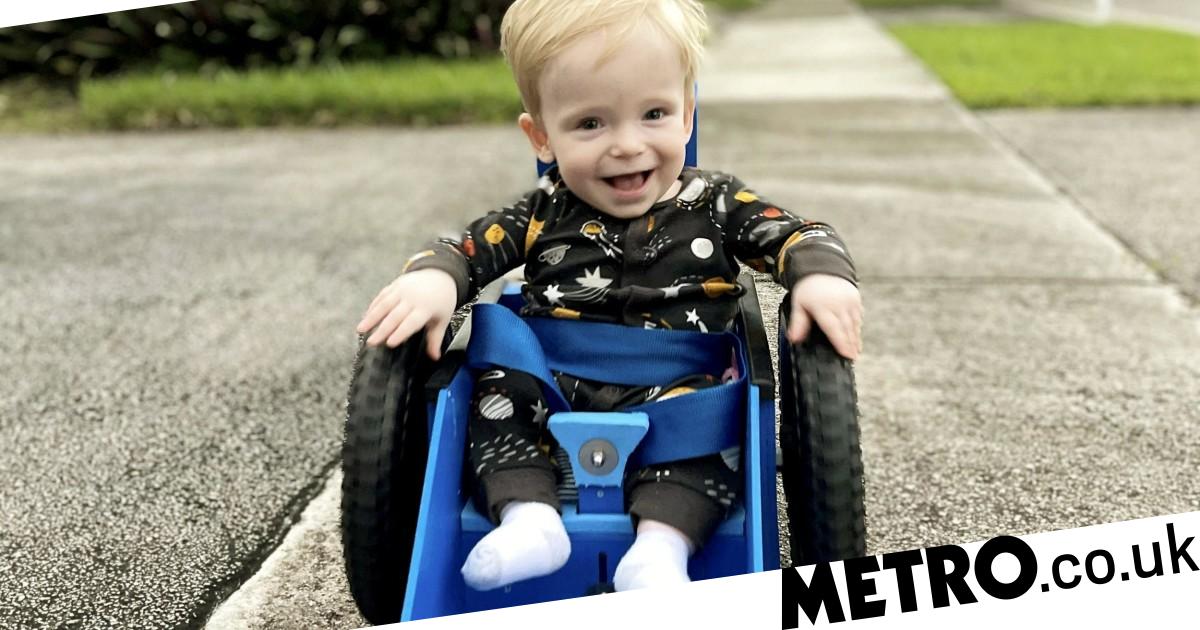 Two-year-old Archer Jagodzinski was diagnosed with spina bifida – a neural tube defect that affects the spine – when his mum Kassey was 20 weeks pregnant with him.

The condition has left Archer unable to walk, and the 22-year-old mum says she was heartbroken to see her young son unable to enjoy life like other children.

But, after being gifted a wheelchair by another family, the little boy has mastered the use of it in less than a year.

Now, Kassey is thrilled to see her determined toddler so mobile and finally playing with his toys on his own.

Kassey, who has since welcomed another son called Oakley, says: ‘It’s so amazing to see him wheel around. He’s improved a lot, and quickly.

‘Last summer, my due date groups for Archer were flooding with videos of their babies learning how to crawl and walk. It was extremely bittersweet for me. I was so happy for the other moms yet super jealous at the same time.

‘I knew once he figured out his wheels, there’d be no stopping him. I knew he’d be into everything and I’d finally have to baby-proof the house and keep a closer eye on him more than I already do.’

It’s taken Archer a while to learn how to use his wheelchair – after spinning round in circles for a while, which would often lead to frustration.

But when he hit 18 months old, he managed to figure it out.

Kassey adds: ‘I remember the first morning that I had to clean up his room – a mess he made with the toys he was finally able to get on his own. I enjoyed every second of it.

‘I get to chase him as he tries his hardest to go as fast as he can but he struggles because he’s laughing so hard.’

Now, Archer rolls at full speed after the family’s dogs and loves to spin in circles – and he’s happier than ever.

Kassey continues: ‘I see his face light up with the biggest smile every time I put him in his chair. He’s a happy boy, but I’ve never seen him this happy.

‘He gets so excited that he can’t even wait to be strapped in. He’s ready to go and he’s taking my heart with him.’


MORE : Man walking Britain’s entire coastline has baby with woman he met along the way

The iPod is dead, but the podcast lives on