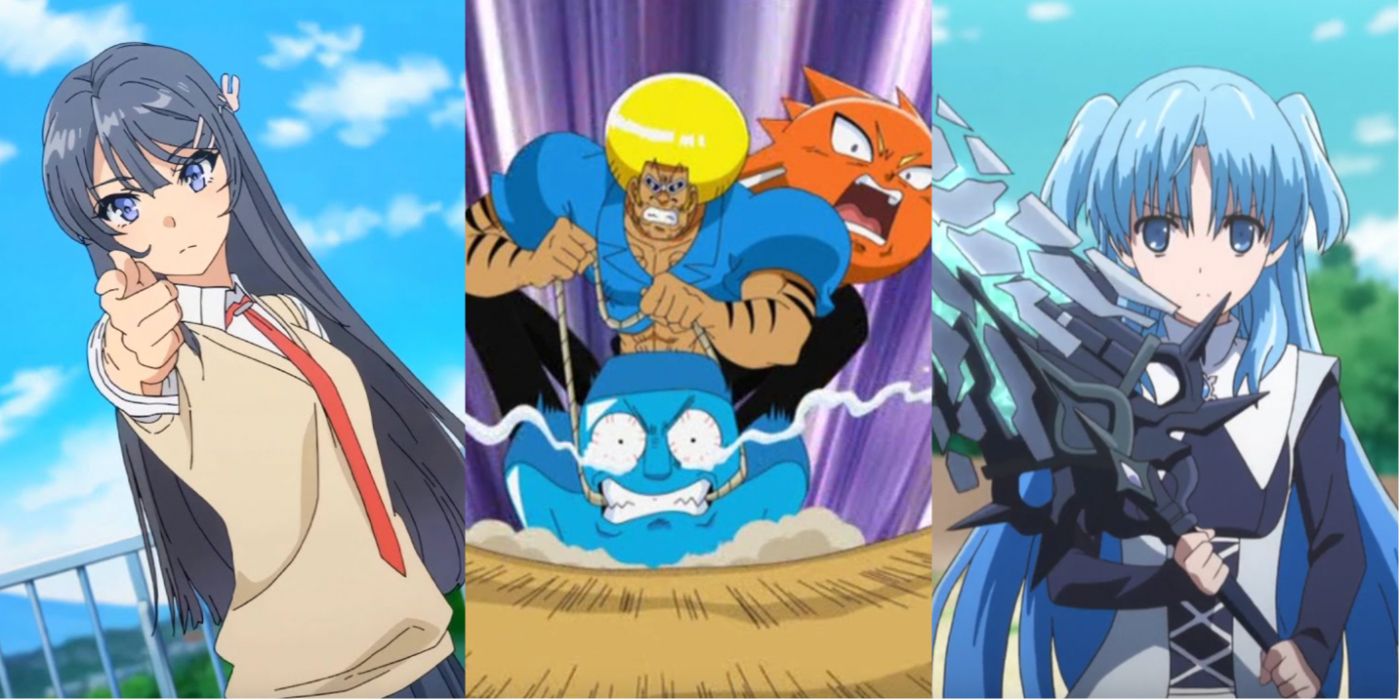 The style of storytelling and corresponding visual elements play crucial factors in an anime series’ success, but sometimes audiences never even give a series a shot because of its odd or unwieldy title.

RELATED: 10 Anime With The Longest Titles Ever, Ranked

It’s never a good idea to judge a book by its cover and these are some of the most satisfying anime series that are unfortunately held back by dreadful names.

10 Durarara!! Is A Nonsensical Title That Belies The Rich World That The Series Creates

Durarara!! is a masterpiece in world-building and methodical storytelling. The moody crime thriller ultimately focuses on the dangerous gangs that congregate in Ikebukuro, but the series frequently plays around with chronology and perspective to get the most out of its conflicted characters.

Durarara!! is a strange title that came to be when the author couldn’t think of a proper name for the series. Durarara!! can be interpreted as the sound of a motorcycle’s revving engine, but this still greatly simplifies the complexity of this crime saga. It’s also not unusual for subsequent anime seasons to turn to unconventional naming patterns. In this case, it’s Durarara!!x2.

9 WorldEnd: What Do You Do At The End Of The World? Are You Busy? Will You Save Us? Mocks Its Viewers

Based on a series of light novels, WorldEnd: What Do You Do At The End Of The World? Are You Busy? Will You Save Us? features a title that’s appropriate for its source material, but comes considerably clunkier for its anime adaptation. The 12-episode fantasy and sci-fi hybrid has a satisfying story that doesn’t cheat its audience or hold back.

Willem is a hero who’s both lovable and intimidating, which is integral in an adventure like this. The problem with the anime’s cumbersome title is that it sounds sarcastic and that this struggle is meant to be some kind of joke. Willem’s mission to rid the Earth of its ferocious beasts is no laughing matter.

8 Keep Your Hands Off Eizouken! Muddles The Series’ Artistic Message

Masaaki Yuasa and his team at Science SARU typically turn out tour de force anime productions. 2020’s Keep Your Hands Off Eizouken! is no exception in this regard, but it’s very easy to completely skip this inspirational burst of joy because of its misleading title.

Keep Your Hands Off Eizouken! creates an image of a protective sibling or even a spry martial artist. In reality, the anime is about a trio of introverted students who bond through their shared love of anime and the creative process. These friends set out to create their own anime, and the series’ 12 episodes are such a creative treat.

A lot of shonen parodies exist, but few are as relentless and unpredictable as Bobobo. The title is a reference to the anime’s brash protagonist, but the repeated and absurdist nature of it all makes it hard for an outsider to understand what the show is about and if it’s even meant to be taken seriously.

6 I My Me! Strawberry Eggs Is Complete Misdirection That Is Unrelated To The Story

The humor that stems from gender-based misunderstandings is a frequent well that anime draws from, like in the 13-episode I My Me! Strawberry Eggs. The anime’s plot is somewhat clichéd and involves a competent male teacher needing to masquerade as a woman in order to gain employment at a sexist school. The plot itself isn’t deep, but the character dynamics and romantic tension all deliver.

I My Me! Strawberry Eggs is another situation where this title isn’t necessarily terrible when in a vacuum, but it’s got absolutely nothing to do with its series’ storytelling. The title is grammatically confusing in English, and there are no strawberry eggs to be seen in this tender series.

The Legend of the Legendary Heroes is a 24-episode fantasy/action anime from 2010 that doesn’t reinvent the wheel but is still successful with its complicated cast of characters, all of whom are uniquely skilled.

The Legend of the Legendary Heroes contains limited comedy as it doesn’t want to diminish the weight of its epic adventure. The problem is that the anime’s title makes the series sound like a parody of fantasy adventures. The title’s repetitive nature is both clunky and unintentionally humorous.

4 Shimoneta: A Boring World Where The Concept Of Dirty Jokes Doesn’t Exist Leans Into Parody

Heroes come in many shapes and sizes and don’t always wear capes. This is the driving force behind Shimoneta: A Boring World Where the Concept of Dirty Jokes Doesn’t Exist, where two freedom-fighting vigilantes try to save the world through lewd gags and visuals.

Shimoneta is undeniably a comedy, but it still grapples with some thought-provoking and important themes with regard to censorship. Those who don’t give Shimoneta a chance mostly assume that it’s empty bawdy humor, which is understandable given its broad title, but there are genuine layers to this series.

A title like Rascal Does Not Dream of Bunny Girl Senpai paired together with the anime’s marketing visuals makes it easy to assume that this is a shallow series that revolves around hormonal humor and awkward situations.

Admittedly, there is a girl in a bunny costume who’s vital to the story, but Rascal Does Not Dream of Bunny Girl Senpai is more of a psychological character study that gradually evolves into a thoughtful science-fiction romance. Sakuta’s confusing condition is thoughtfully examined, and each episode packs in emotional revelations instead of the cheap gags that are implied by the series’ title.

2 So I’m A Spider, So What? Doesn’t Deserve To Get Swatted Away

There are now so many satirical isekai series that a show with a title as ridiculous as So I’m a Spider, So What? doesn’t even seem strange. So I’m a Spider, So What? reincarnates an entire class of students who reawaken in a fantasy world that’s heavy with RPG customs. The main character finds that she’s been reincarnated not as a heroic warrior or powerful magic user, but instead as a lowly spider monster.

The 24 episodes of So I’m a Spider, So What? are quite entertaining and fresh. The biggest issue is that the show’s generic title lumps it together with the many “subversive” isekai series that are lacking substance.

The movie’s title telegraphs that a pancreas plays a vital role in the film, but it’s too lighthearted. It makes it seem as if the movie is a broad comedy or about man-eating monsters.

Next: Getting Started: 10 Best Gateway Anime For Different Genres

Ghislaine Maxwell put on suicide watch ahead of sentencing