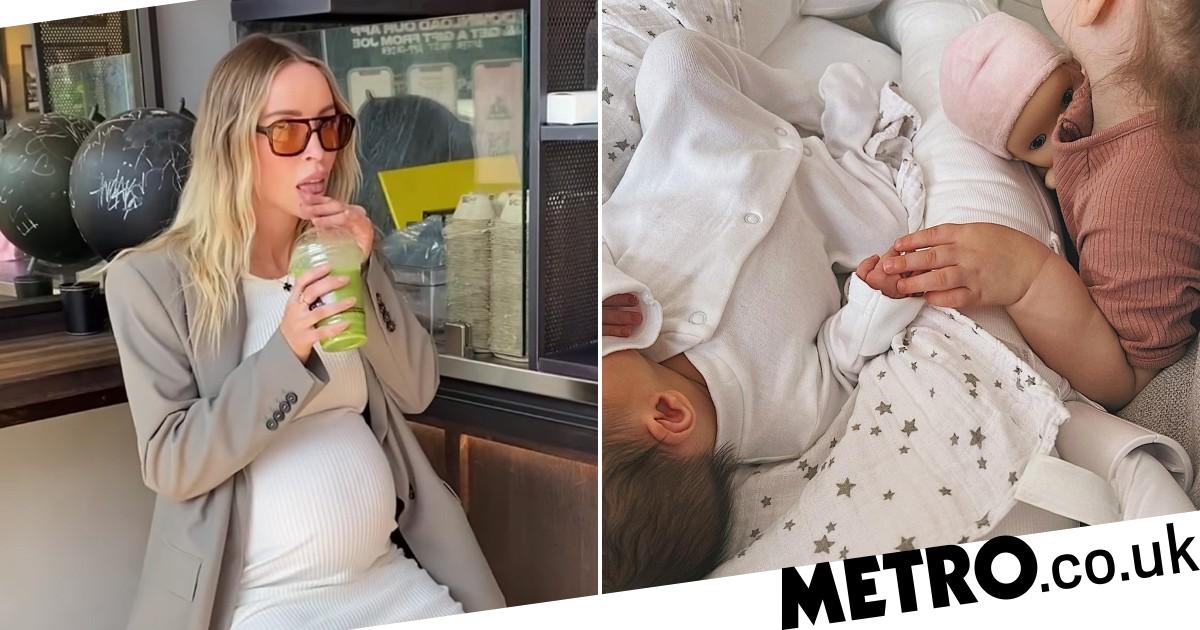 The couple are now parents to two girls, after they welcomed eldest Raine Anais in July 2020.

Their special arrival happened earlier this week, with Lauren confirming their daughter’s name is Leni Star.

An adorable snap shows toddler Raine already doting on her sibling and taking her role as an older sister seriously, while Lenni sleeps soundly.

Lauren – who appeared on the ITV reality show from 2010 until 2019 – posted the pic on her Instagram, captioning it: ‘Sisters 🥰🥰 Welcome to the world our beautiful little Leni Star ⭐️’.

The sweet image shows Leni curled up while Raine holds her hand, carrying a doll in the other.

Fellow reality stars couldn’t wait to congratulate the couple on their happy news, with Towie’s Maria Fowler commenting: ‘So happy for you all ❤️❤️❤️’.

‘So much love there already! Raine the protective elder sister! Huge congrats to all of you & a big welcome to Leni Star! 💕💜💕’, a fan also wrote.

Just days before her birth, Lauren shared that she underwent a hospital procedure to help turn her breech baby before giving birth.

She shared the process – called External Cephalic Version (ECV) – online, explaining that she felt ‘well and truly poked and prodded’, but the procedure was a success.

Lauren posted a video to offer support to others going through the same thing, saying she was ‘so relieved’ after the procedure worked, but she didn’t want to ‘sugarcoat’ it as the ordeal ‘wasn’t pleasant.’

‘Baby is now head down and I am so relieved! There is a small chance they can turn back before you go into labour but I’m going to stay positive and hope for the best’, she wrote.

‘I’m not going to sugarcoat it, it isn’t the most pleasant experience but if you breath deep through it and try to zone out, it is over before you know it, I think in total it was around 3/4 minutes.

‘You and baby need to be monitored before and after to make sure all is ok, so in total I was there a couple of hours.

‘Also had a blood test booked the same day so I left feeling well and truly poked and prodded lol but totally worth it.’

She said her stomach was sore that evening, but the discomfort was ‘totally bearable.’

‘So for anyone in the same position, hope you sees this and it helps to ease your anxieties, I felt pretty anxious in the lead up to it and I’m the biggest baby so if I can do it, you can do it!! Now just need to sit and wait for when they feel ready to make an arrival,’ she concluded.

Lauren and businessman Tony met in 2019, supposedly though the ol’ DMs.

At the time, Towie fanatics were still watching Lauren’s romance with co-star Sam Mucklow play out on the small screen, before the two later decided they were better off as friends.

Lauren decided to leave the hit show to settle down and pursue other passions, such as her DJing and hair extensions business, Hair Rehab London.


MORE : Peter Andre says women scream, ‘My nan loves you’ at his concerts


MORE : Perrie Edwards announces engagement to Alex Oxlade-Chamberlain: ‘The love of my life got down on one knee’

Ritual of the Night Gets New Development Roadmap