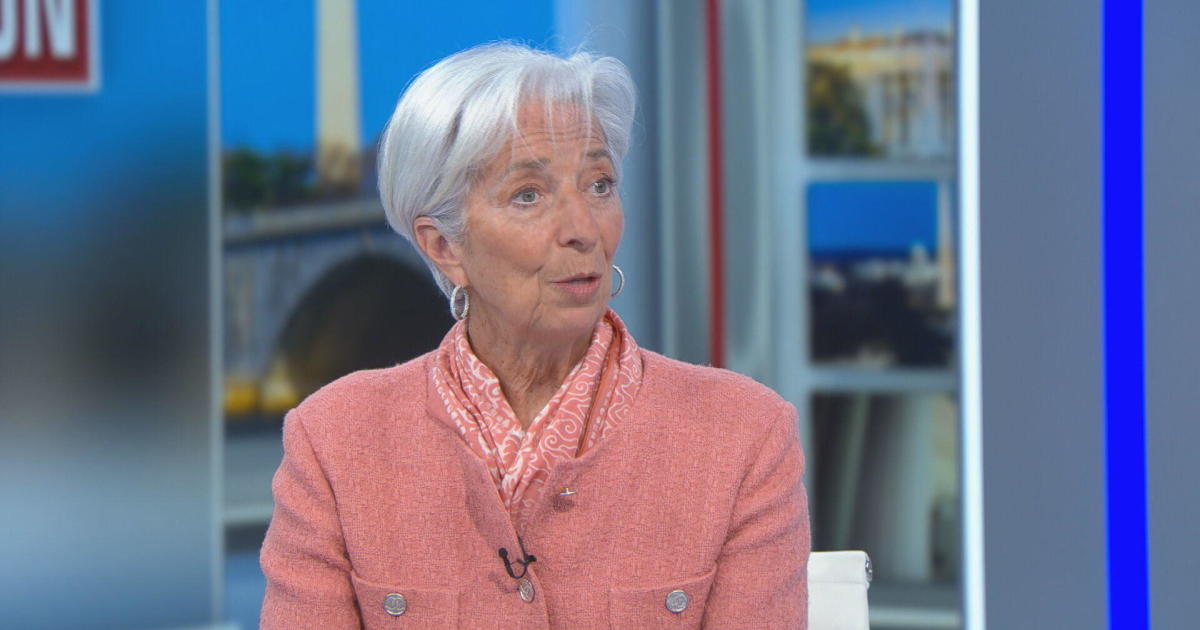 The following is a transcript of an interview with Christine Lagarde, president of the European Central Bank, that aired Sunday, April 24, 2022, on “Face the Nation.”

MARGARET BRENNAN: We are joined now by Christine Lagarde, the president of the European Central Bank, which sets monetary policy, including interest rates for the 19 countries that use the euro as a currency. Madame Lagarde, welcome to the program.

PRESIDENT OF THE EUROPEAN CENTRAL BANK CHRISTINE LAGARDE: Thank you so much And good morning.

MARGARET BRENNAN: Good morning. Good to have you back here in Washington. We talk often about inflation in this country, but inflation is also at a record high in Europe. The Federal Reserve chair has talked about raising interest rates in this country next month by as much as half a percent to try to get control here. Why do you think you can wait until the summer?

LAGARDE: I believe that we share the same resolve, which is to tame inflation, which is to use all the tools that we have to do so. But we are facing a different beast. When I look at my core inflation, which is inflation taking out the most volatile elements such as energy and food, my core inflation is at 2.9%. Inflation in Europe is very high at the moment. Fifty percent of that is related to energy prices. Pre-Ukraine war, it was already climbing, but the Ukraine war has dramatically increased those prices. So we have to use the tools and the sequence, which is appropriate depending on the sources of inflation. If I raise interest rates today, it is not going to bring the price of energy down. So we have embarked on that journey of gradually removing accommodative monetary policy. So we will be interrupting the purchases of assets in the course of the third quarter. High probability that we do so early in the third quarter. And then we will look at interest rates and how and by how much we hike them. But we have to be data-dependent because of the sources of inflation that we have at the moment.

MARGARET BRENNAN: You have said energy, high energy and lack of confidence could be persistent here. Does that indicate a high degree of concern that we could be tipping into a recession? And can you raise rates without that risk?

LAGARDE: It’s the tradeoff that Central Bank governors face at the moment. We have to be guided by our mandate, by our objective, which is to restore price stability, which we have all defined as roughly 2%. So that’s- that’s the mandate. But at the same time, we have to do so in a sufficiently well-sequenced, well-calibrated, for us in Europe, gradual way so that we don’t induce recession. We currently are facing, you know, winds that reduce growth and increase inflation. So we have to navigate between the two, guided by the mandate of price stability and bringing inflation down.

MARGARET BRENNAN: You’ve referenced the war with Russia a few times here, and we’ve all been learning just how dependent Europe is on Russia for its supply of fossil fuels. Germany warned an embargo of Russian gas could cause economic output to drop 5%, and yet there are calls for total embargoes on Russian gasoline. I mean, is- is this practical? And how much is the politics impacting this?

LAGARDE: You know, I think we have to be guided by the purpose that we have. And the purpose we have is to reduce and possibly cancel the financing that is provided to Russia to finance the war, the unjustifiable, illegitimate war of Russia against Ukraine. So we have to adjust the policies, whether it is sanctions, whether it is de-SWIFTing the banks, whether it is cutting out the oligarchs from the assets and their sources of financing, whether it is reducing and eventually cutting out supplies from Russia in such a way that we actually reach the goal we have, which is to reduce financing. If we were to take abrupt measures that would induce an increase of the price of oil or gas around the world from which the Russians would eventually benefit, then that would not be the right policy move. So we have to do it in a sufficiently smart and subtle way so that we actually achieve the goal that we have, which is to reduce the financing. And I think that’s what the Europeans together are looking at. The plan to completely boycott coal has been adopted. There’s a lot of work going on concerning oil, concerning gas. And, you know, there will be more stories to tell a bit later on.

MARGARET BRENNAN: You know, in this country, there’s a lot of debate around how much the government is to blame versus the central bankers for the inflation that we’re experiencing. The US spent $6 trillion on COVID relief, $2 trillion of it on President Biden’s watch last spring when the economy was already recovering. Do you think some of this spending in the US exacerbated inflation because Europe didn’t spend like this?

LAGARDE: We spent- we in Europe spent less in stimulus. And I think we spent differently. We spent pretty much half as much as what the US government spent on the stimulus and heating up the economy. But we also spent it differently because I think the focus was predominantly on keeping the jobs, not necessarily sending the checks. And as a result of that, people who managed to keep their jobs alive, while not necessarily, you know, going to work because COVID stopped everybody from going to work at some point in time, they had their job. So when COVID was over, they went back to their job. So I think that the- the- the labor market that you have currently in this country, in the US, which is incredibly tense, where you have, you know, a lot of jobs that are not filled, where you have plenty of vacancies, we don’t have that in Europe at the moment. And the current situation you have on the labor market here in the US is clearly contributing to possible strong inflation and second round effect where prices go up, wages go up, short supply of labor, wages continue to go up, and that feeds back into prices. That- that’s one of the differences between our two economies.

MARGARET BRENNAN:  You’ve been in key positions throughout a number of economic crises. How dangerous is this moment that we are in right now?

LAGARDE: It is a difficult moment, but it’s one where a very interesting phenomenon developed. If I look from my vantage point at Europe, the Russian aggression against Ukraine has produced three key results. It has resurrected NATO. This is Easter Day. So I’m not- I’m not, you know, fantasizing here, but it has resurrected NATO. It has united the Europeans more than ever and it has strengthened a nation, Ukraine. The price of that is terrible. The death, the destruction, the devastation. And we are all concerned and all want to help.

LAGARDE: But this is quite an interesting development. And we have to be united and resolved to actually address the situation together because—

MARGARET BRENNAN: I have to—

LAGARDE:  —there has to be solidarity.

MARGARET BRENNAN: I have to end it there because we’re out of time. We’ll be back.