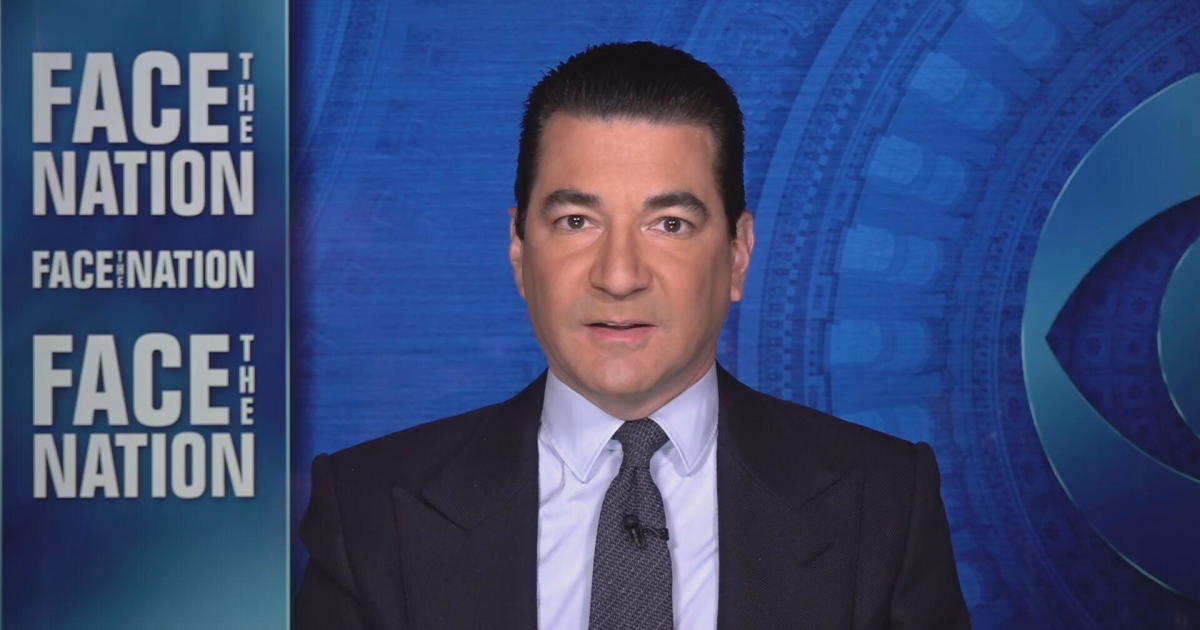 The following is a transcript of an interview with Dr. Scott Gottlieb that aired Sunday, April 24, 2022, on “Face the Nation.”

MARGARET BRENNAN: Mark Strassmann in Atlanta. We go now to Former FDA Commissioner and Pfizer Board Member Doctor Scott Gottlieb. He joins us from Westport, Connecticut. Good morning to you, Doctor.

MARGARET BRENNAN: I want to get to kids in a moment. I’ve got a lot I want to ask you about there. But let’s start on the masks. Put the legal argument aside. As a medical professional, when you get on a plane, are you still going to put a mask on?

DR. GOTTLIEB: I wear a mask when I get on a plane while I’m boarding and also while I’m getting off the plane. I think those are the two points where you’re in a congregate setting, where there’s poor air circulation. Those really are the risky venues. Those are the risky points in your journey. When you’re up in the air, when you’re at 10,000 feet, there’s pretty good air filtration on a plane. So I don’t feel at risk at that moment. So I take my mask off while we’re flying. That’s been my practice since this mandate got lifted. That’s probably what I’m going to continue to do, so long as prevalence remains where it is right now.

MARGARET BRENNAN: And to be clear, when you say mask, you mean an N95.

DR. GOTTLIEB: Yeah. Look, I wear a high-quality mask. I wear a KN95 mask. I think if you’re wearing a poor-quality mask, a cloth mask, or procedure mask that’s not a level three procedure mask, you’re probably deriving a lot less protection than what you perceive. Omicron is an airborne pathogen at this point, it’s spreading through airborne transmission. A cloth mask isn’t providing a measurable degree of protection. So if you yourself want to protect yourself from this pathogen, you really need to wear a well-fitted higher quality mask.

MARGARET BRENNAN: Big picture, according to HHS, we are still in a public health emergency. Are we yet at an endemic- endemic phase of this?

DR. GOTTLIEB: No, I don’t- I think this year is really a transition year. I think this is going to be the year when this becomes more- more of an endemic illness. It’s not going to be a defined point in time when that happens. But what’s going to happen is this is going to settle into more of a seasonal pattern. I do expect prevalence levels to start to decline. We may be peaking right now if you look at the wastewater data, hopefully over the summer, through the summer. We have pretty low prevalence of this infection and then we’re going to see it re-emerge in the fall. The question is what re-emerges?

DR. GOTTLIEB: Is it a new strain of Omicron? And that’s going to drive decisions around the vaccine.

MARGARET BRENNAN: And fall makes kids vaccines even more timely. So stay with us. We’re going to take this break and come back and finish our conversation with Dr. Gottlieb.

MARGARET BRENNAN: Welcome back to FACE THE NATION. We continue our conversation now with former FDA commissioner Dr. Scott Gottlieb, who’s also on the board of Pfizer. So, Dr. Gottlieb, when I heard the mask mandate being lifted on transportation, I thought of my 1-year-old who I don’t want to put on a train and I don’t want to put on a plane because I can’t put a mask on him and he is not vaccinated. What are parents of the youngest Americans supposed to do? Not travel?

DR. GOTTLIEB: Look, this is a really difficult situation because we’re effectively saying that people need to take matters into their own hands in terms of protecting themselves. We’re no longer applying mandates on the entire population, but asking people to individually assess their own risk, but not giving everyone the tools they need to do that, particularly young kids who now are going to be made vulnerable in these public settings. But there’s no vaccine available for those kids. And I know a lot of parents have been waiting a very long time. There’s kids with health conditions that can’t get the benefit of a vaccine that could provide them some baseline immunity that could- that could protect them from severe disease. And I think we need to try to make a vaccine available to those children very soon. In terms of where this stands right now, you know, I’ll take each application in turn. Pfizer, as you know, submitted about four months ago the data on their two-dose vaccine. The FDA has had that data for about four months and has had the benefit of reviewing it. They deferred making a decision on that vaccine. They didn’t felt- feel it reached the level of efficacy that they had prescribed, which was a threshold of 50% effectiveness of preventing symptomatic disease. And so Pfizer is now testing a third dose to see if that will boost the effectiveness of the overall regimen, and the data from that should be available very soon. Moderna released topline data on their vaccine on March 23rd. Their two-dose vaccine and the reports are- the public reports are they’re going to file this week. My expectation is that FDA is going to hold an advisory committee in early June to discuss one or both of these applications. That gives the agency about six weeks to review the Moderna application, which is consistent with how long the agency has taken to review these applications. It took them five weeks to review Pfizer’s 5 to 11 application, and I’m hoping that Pfizer will have all their data in in time to also be considered at that advisory committee. But just in closing, you know, if the Moderna application is ready and the Pfizer application is not, I think the FDA would and should consider it separately.

MARGARET BRENNAN: Well, that’s an important point to make, because there was reporting, as you know, in Politico this week, that there were conversations within the Biden administration worrying if you authorize one vaccine before the others, that it’ll confuse parents. But with adults, one vaccine was authorized and made available before the other. So is that flawed thinking? Do you know if there’s any truth to that reporting?

DR. GOTTLIEB: Well, look, I don’t- I don’t agree with the thinking, but when I just look at the timeline that’s laid out here, if you believe that they are going to hold an advisory committee in early June- that’s been long rumored. That- that meeting was supposed to be planned to consider a bivalent vaccine, the Omicron-specific vaccine. And the consideration of the childhood vaccine is going to get latched on to that meeting. If you- if you consider that timeline, that gives them about six weeks to review them or during the application. And I believe that Pfizer is going to have their data in a sufficient time to also meet that deadline. Six weeks is about what the agency has been taking. They’ve been reviewing these applications in four- four or five weeks. Having an AdCom does add additional time. It’s going to add an additional week or two. The final point I would make is the question of why are they bringing it before the advisory committee? And that raises the broader question here of whether or not the agency is going to consider vaccines that don’t reach their 50% threshold approvable. The reason they deferred, at least in part, the reason they deferred the Pfizer vaccine previously is it didn’t meet that threshold. So this is going to be controversial before the advisory committee. That’s why they’re taking it before that AdCom. I hope there’s a favorable outcome for one or both of these vaccines, but I do expect there to be some pushback among those members.

MARGARET BRENNAN: When we spoke back in January about where Pfizer was with its submission, you did make the argument that it might be advisable to make just two doses available while they looked at a third because some protection is better than none. Is the FDA thinking that way? You- you mentioned a 50% efficacy rate. If the data isn’t meeting that benchmark, should these vaccines still be approved?

DR. GOTTLIEB: Well, the- the data won’t reach that benchmark. The Moderna data is about 40% in the data they released. The Pfizer data- the previous data was about 40% as well. We’ll see if the third dose provides additional protection on top of that. But we know these vaccines aren’t working very well against Omicron at preventing symptomatic disease. I do believe from a clinical standpoint, there is value in getting baseline immunity into children, even if you’re not going to fully protect them against symptomatic illness, if you can protect them against severe disease and hospitalization, that provides a lot of value, especially children who are vulnerable, who have health conditions. So I think for FDA to authorize these vaccines, they’re going to have to come to that view as well, because these vaccines are not going to meet their prespecified target of providing 50% efficacy. We know that right now. I mean, it’s possible that the third dose of the data, the third dose of the Pfizer vaccine will reach that benchmark. I don’t think that’s going to be the case because I don’t think there’ll be enough symptomatic cases in that data set to evaluate.

MARGARET BRENNAN: This is an important conversation. We’re going to continue to have it and watch what the FDA does very carefully. Thank you very much.