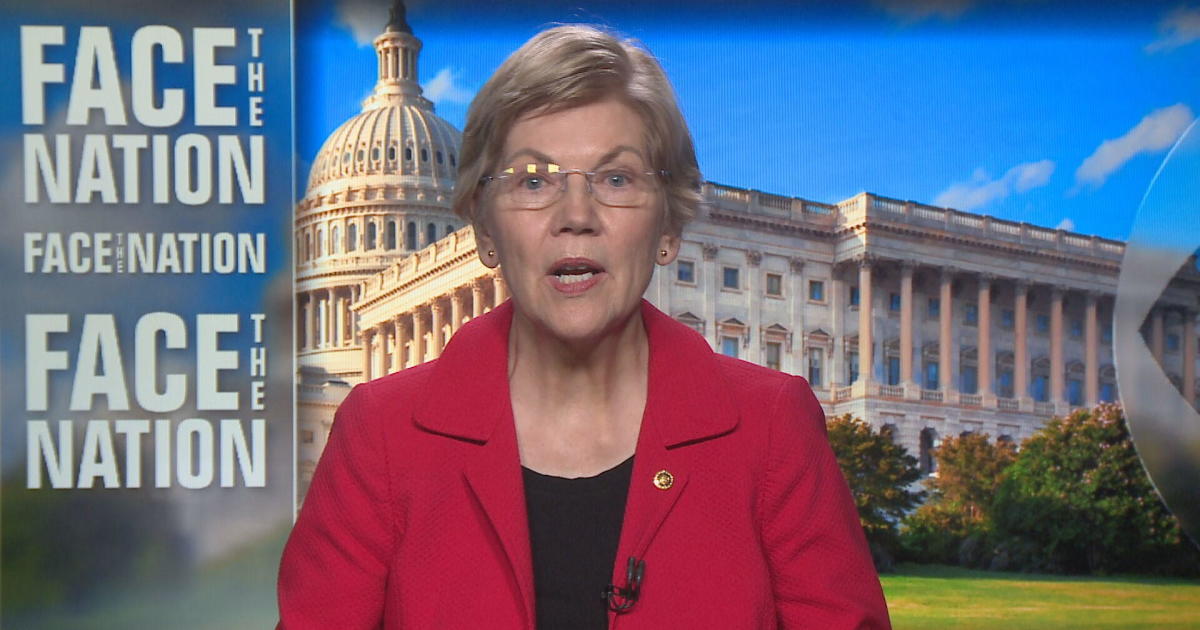 The following is a transcript of an interview with Democratic Sen. Elizabeth Warren of Massachusetts that aired Sunday, April 24, 2022, on “Face the Nation.”

MARGARET BRENNAN: We turn now to politics. The midterm elections, we are just over six months away from them. And the question is, will Democrats be able to hold both the House and the Senate? Massachusetts Democratic Senator Elizabeth Warren joins us now from Boston. Good morning to you. Senator, I know you have some strong thoughts on the matter. I read your op-ed this week and you warned Democrats could face disaster because they promised more than President Biden has delivered. Why do you think Democrats may lose the majority?

SENATOR ELIZABETH WARREN: Look, Democrats need- Democrats win when Democrats are in touch with the American people and what’s happening to them. Today, we’ve got people who are in the checkout line for groceries and having to pick what they’re going to send back because they can’t afford to pay for it. We’ve got millions of people across this country who say they’re not ready for their student loan payments to resume, that they simply can’t manage those loan burdens. We’ve got millions of people across this country who can’t fill up on a tank of gas, so they’ll be able to get to work this week. As Democrats, we need to deliver. We need to hit costs head on and we have the power to do that. We’ve got less than 200 days left, though. And instead of looking backwards, let’s look forward. Let’s get done what we can get done for the American people who elected us, for the American people who are counting on us.

MARGARET BRENNAN: Well, Republicans would agree with you inflation is a big problem. It’s one of their chief attack points on the president. You just mentioned student debt. I know you believe the president can just erase it essentially through executive orders, but both the White House and Speaker Pelosi have said he may not have the authority, that Congress would have to act here. Have you persuaded the White House otherwise?

SENATOR WARREN: Look, we know that the president has the authority to cancel student loan debt and the best way we know that is because President Obama did it, President Trump did it, and President Biden has now done it repeatedly. The power is clearly there-

MARGARET BRENNAN: Extending the deadlines you mean there?

SENATOR WARREN: No, no. They have canceled- remember, they have canceled debt. They’ve both canceled it for people in certain categories entirely but they have also canceled the interest that is due on people’s student loans. They haven’t deferred it. They have canceled it because the power of the cancellation is already in the statute. President Obama, President Trump, President Biden have all done it. And understand on cancellation this is something the American people want and it’s something that tens of millions of people need. Forty percent of the folks who are handling student loan debt don’t have a college diploma. These are people who tried, but life happened: pregnancy, they were working three jobs, their mom got sick, they had to move to another city. And now they earn like a high school grad but they are trying to manage college loan debt and it is crushing them.

MARGARET BRENNAN: But at the time of—

MARGARET BRENNAN: What- I’m aware with why this is a priority for you. But the concern is at this moment, it could also be inflationary in an environment where there already is high inflation.

SENATOR WARREN: No, it is not inflationary. Not paying student loans has been baked in for three years now. But keep in mind, as President Biden himself says, the way we deal with inflation is not by making people poorer. The way we deal with inflation is we attack high prices head on, price gouging. We straighten out the supply chain so goods can come into people. We attack it head on, not by trying to make people poorer. Canceling student loan debt is something that would be good for people all across this country and more importantly, good for our economy overall.

MARGARET BRENNAN: You also in your op-ed talk about a number of Build Back Better agenda items: child care, universal pre-K. But all 50 Democratic senators do not support that. The president himself has acknowledged his problem. He talked this week just about being able to get to the number 48. Are Senators Manchin and Sinema changing their minds here? Do you have any different math?

SEN. WARREN: So look, there are a lot of things on which we all agree and there are things on which we need to continue the negotiations. Let’s just start actually with price gouging. You know, I think all the Democrats are on board that these giant companies should not be not only passing along costs in inflation, but actually adding an extra dollop so they can pad and expand their profits.

MARGARET BRENNAN: But you think this can get done in the next few weeks before people leave for Memorial Day?

SEN. WARREN: We deliver, and that’s what democracy’s about, we can face that election in November with our heads held high.

MARGARET BRENNAN: A few weeks ago, Senator Angus King said, “If you have a Franklin Roosevelt policy agenda, you need Franklin Roosevelt majorities.” He just comes back to that premise of we don’t have 50 Democratic votes. So am I hearing you say Democrats just need to get caught trying?

SEN. WARREN: Look, what you’re hearing me say, first of all, is that not everything has to go through Congress. We picked the example of student loan debt. That would affect about 43 million people. That matters. It would affect them directly and affect their families. It’s also the case that there are many things that we agree on. We can attack corruption head on. I’ve got a bipartisan plan that says members of Congress cannot trade in stocks. They can’t own individual stocks. That’s something we should be able to agree on and move forward and help restore just a little faith that when we take actions in Congress, it’s not to pad our own pockets. It’s actually on behalf of the American people. And look at all the other pieces that the American public tells us they support. For example, a minimum corporate tax for these giant corporations—

SEN. WARREN: —that pay nothing. We’re all in agreement on that on the Democratic side.

SEN. WARREN: Now, sharp difference with the Republicans who want them to continue to do that.

MARGARET BRENNAN: Well, we will see—

SEN. WARREN: But that’s exactly what we should be pushing forward.

SEN. WARREN: We need to be in the fight.

MARGARET BRENNAN: Well, and the- the president’s out there talking about his accomplishments. We’ll see if he takes up your advice. Senator Warren, thank you for sharing it with us. We’ll be right back. Stay with us.