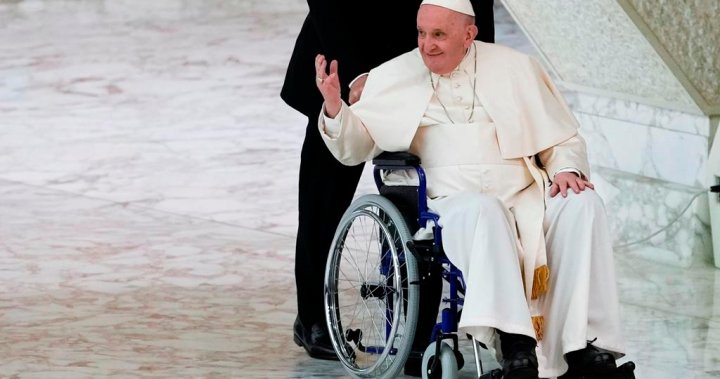 Treaty 6, the Métis Nation of Alberta and Edmonton’s mayor said Friday they are pleased Pope Francis will be visiting the city as part of his trip to Canada this summer.

The Pope, 85, will visit Alberta’s capital along with Quebec City and Iqaluit from July 24 to July 29 and will also visit a former residential school as part of his commitment to Indigenous healing and reconciliation, organizers say. Edmonton is located within Treaty 6 Territory.

“I thank the survivors of residential schools who tirelessly advocated for Pope Francis’ visit to the lands now known as Canada,” said Treaty 6 Grand Chief George Arcand Junior. “I also want to acknowledge Chief Wilton Littlechild’s leadership — his unwavering commitment has been pivotal in seeking an official apology from Pope Francis and the Catholic Church.”

“There are numerous residential school sites across the country that have been identified for the Pope’s week-long visit. I recognize the impact the Pope’s visit will have in Treaty 6, to the survivors, their families and communities.

“My prayers are with the survivors. It is my hope we are on a path to healing and that survivors’ truths are validated with this historic visit to our Territories.”

Mary Jane Mitchell, a residential school survivor, said she was excited to hear the Pope would be coming to Edmonton.

“This is going to be a good thing for me because it’s going to help with my healing … I have to forgive and I will,” Mitchell said.

She acknowledged that not all survivors will feel the same way she does.

“I just want to say that I’m hoping other residential school survivors, I’m hoping that they too can find forgiveness in their hearts and not have so much hate and anger.

“For me it’s my healing journey. For my healing, I need to heal from the past and I need it for my children too. They need to learn what forgiveness is.

“It is moving forward,” Mitchell said.

“Each time I’m able to forgive, it’s easier to forgive.”

President of the Métis Nation of Alberta said she was pleased Pope Francis accepted the invitation of survivors of residential schools to visit Canada and Alberta.

“This represents another step down the road of reconciliation following the historic visit to the Vatican in April,” Audrey Poitras said in a news release.

“We are hopeful one of the locations Pope Francis visits is Lac Ste. Anne, Alta., because the location is culturally and spiritually significant for the Métis Nation of Alberta and all Indigenous Peoples in the Country.

“We look forward to working with the Holy See to ensure our citizens, especially survivors, will have the opportunity to attend gatherings as part of his visit,” Poitras added.

The visit to Canada comes after the Pope’s historic apology last month in Italy for the Roman Catholic Church’s role in residential schools in Canada.

“We will have the Pope visit a former residential school site and other locations of significance,” said Archbishop Richard Smith of Edmonton, general co-ordinator of the trip for the Canadian Conference of Catholic Bishops, at a news conference on Friday.

“We fully expect that the Pope will reiterate the apology he did give in Rome.”

“Edmonton is pleased to be selected as the hub for the western leg of the Pope’s visit to Canada.”

The statement pointed out that the itinerary hasn’t yet been finalized but that Edmonton will serve as a gathering place for survivors, their families and communities.

“I am pleased to hear that Pope Francis is following through with one of the recommendations of the Truth and Reconciliation Commission to formally apologize to First Nations, Métis and Inuit communities on Canadian soil for the atrocities committed against them through the Residential School System,” Sohi said.

“Edmonton is deeply committed to Truth and Reconciliation and in that spirit, we welcome Pope Francis to our city and look forward to working with him and local faith leaders to repair generational pain and trauma caused by residential schools.

“The lived experience and the ongoing impacts are still very much with us today. We will seek the guidance of Elders and of the various affected communities to understand the role that the City of Edmonton can play to welcome Pope Francis.”

The mayor said the city will work with local First Nations, Métis and Inuit communities, as well as the local Catholic Diocese. The city has partnered with those organizing the visit, the Canadian Council of Catholic Bishops and the Archdiocese of Edmonton to organize facilities, logistics and programming.

Last fall, the Vatican announced the Pope intended to come to Canada to help efforts at reconciliation with Indigenous Peoples.

He met with several Indigenous delegations at the Vatican last month, where he delivered an apology for the church’s role in the residential school system.

“All this made me feel two things very strongly — indignation and shame,” the Pope said to the crowd seated in an ornate, well-lit room inside the Vatican on April 1. “Indignation, because it is not right to accept evil, and even worse to grow accustomed to evil as if it were an inevitable part of the historical process.

“All these things are contrary to the gospel of Jesus Christ. For the deplorable conduct of these members of the Catholic Church, I ask for God’s forgiveness and I want to say to you with all my heart, I am very sorry.”

Gogglebox: Ellie Warner speaks to boyfriend on phone as she returns