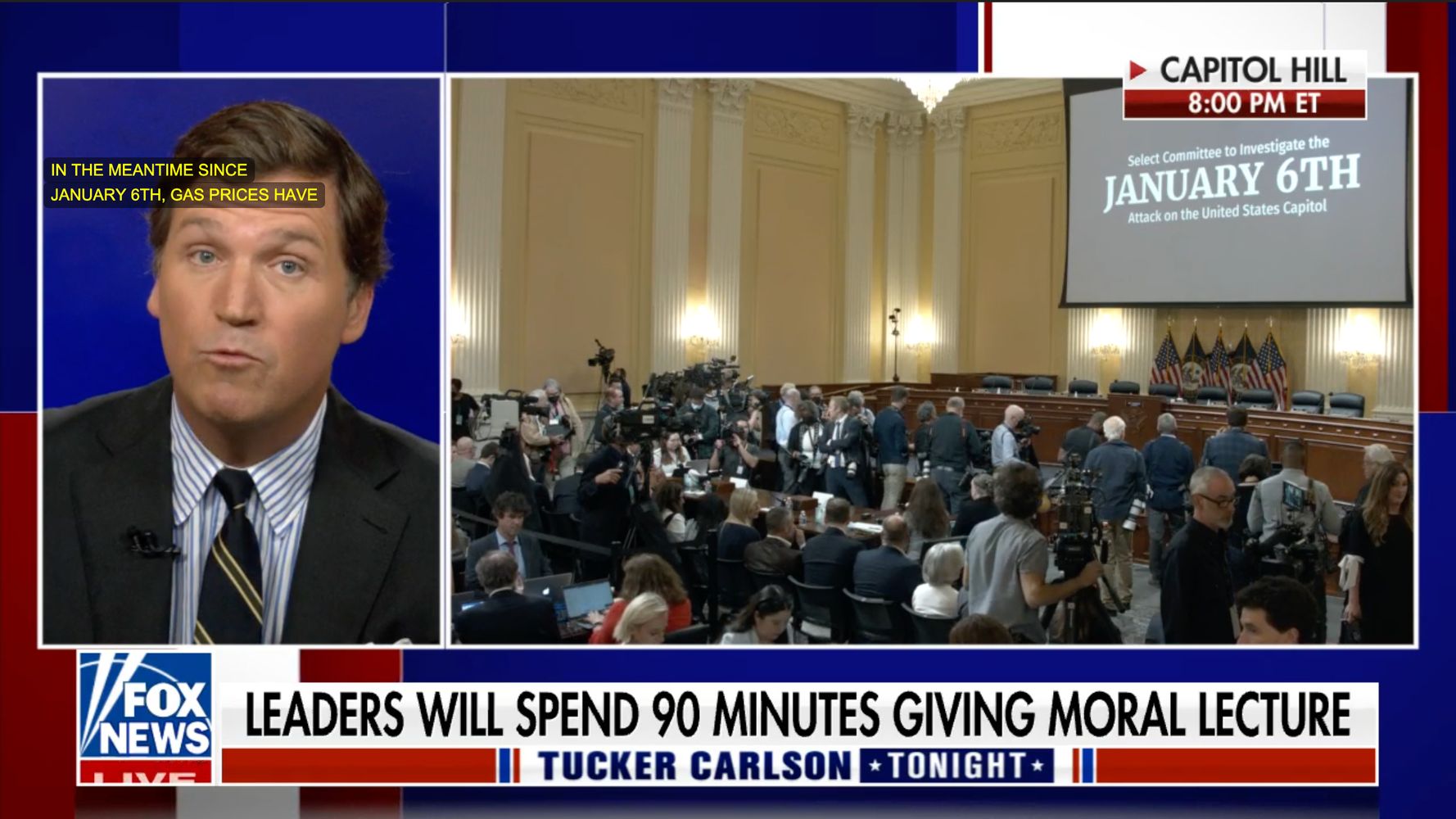 Tucker Carlson opened his Fox News show on Thursday evening by making it clear that neither he nor Fox News — unlike every other major news channel — would be broadcasting the prime-time, historic House select committee hearing on the Jan. 6, 2021, attack on the U.S. Capitol.

The hearing, Carlson intoned, was “deranged” and “insulting,” and he simply refused to “play along.”

“This is the only hour on an American news channel that will not be carrying their propaganda live,” Carlson said, comparing the hearing to the stuff you might see in “totalitarian regimes.”

“They are lying, and we will not let them do it.”

And so, as the House committee broadcast previously unseen footage of the shocking violence by a mob of Donald Trump supporters on Jan. 6 for all the country to see, Carlson instead broadcast panned-out shots of members of Congress watching the footage.

He and his producers plastered hysterical chyrons across the screen for their millions of viewers to see: “JAN 6 CMTE FUELS FALSE NARRATIVES AS SHAM INVESTIGATION DRAGS ON.” “LEADERS WILL SPEND 90 MINUTES GIVING MORAL LECTURE.” “OUR LEADERS ARE FOCUSING ON JAN. 6 WHILE IGNORING THE REAL THREATS.”

Tucker Carlson’s opening salvo: “It tells you a lot about the priorities of our ruling class that the rest of us are getting yet another lecture about January 6 tonight – from our moral inferiors, no less.” He says “they are lying and we are not going to help them do it.” pic.twitter.com/tbxhWcnEPT

Carlson also welcomed a murderer’s row of his favorite guests, including Rep. Tulsi Gabbard (D-Hawaii), right-wing pundit Michael Tracey and Darren Beattie, a onetime speechwriter for former President Donald Trump who was kicked out of the White House for speaking at a white supremacist conference.

Beattie was one of the main talking heads for “Patriot Purge,” Carlson’s conspiratorial docuseries about Jan. 6 on Fox Nation.

Carlson used his prime-time hour Thursday to recapitulate the wild revisionist history of Jan. 6 he pushed in “Patriot Purge”: that the violence of the attack on the Capitol was actually stirred up by the FBI as a pretext to arrest Trump supporters en masse.

Carlson also tried to compare the Jan. 6 attack to the anti-racist uprisings of 2020, a false equivalence his guests lapped up with glee.

“When the political violence benefits them, they turn a blind eye toward it,” said American Conservative Union President Matt Schlapp. “When real Americans have outrage, they want to put them in jail.” (Schlapp did not explain what constituted a “real American.”)

Fox News did not break for a commercial for the whole hour of Carlson’s show.

“Carlson went the whole hour without a break,” tweeted Matthew Gertz, a senior fellow at Media Matters, the liberal media watchdog. “Fox is desperate to keep its viewers from switching to another channel and seeing the hearing in real time.”

“Fox News isn’t just letting Tucker Carlson do his regular show, they’re airing it without commercials,” Gertz added. “They want to push his propaganda so much that they are leaving money on the table to do it.”

At one point in his show, Carlson, while arguing that what happened on Jan. 6 was not an insurrection, seemed to threaten another insurrection.

“This was not an insurrection,” he said of the attack to try to stop Congress from certifying the 2020 Electoral College vote, “but you know what will give you an insurrection? If you ignore legitimate concerns of a population. If you brush them aside like they don’t matter when gas goes to $5 and say ‘Buy an electric car.’ When cities become so filthy and dangerous that you can’t live there. When the economy becomes so distorted your children have no hope of getting married and giving you grandchildren. When you don’t care at all about any of that and all you do is talk about yourself, nonstop, you might get an insurrection if you behave like that, speaking of insurrections.”

Plastic Water Bottles to Be Phased Out at National Parks