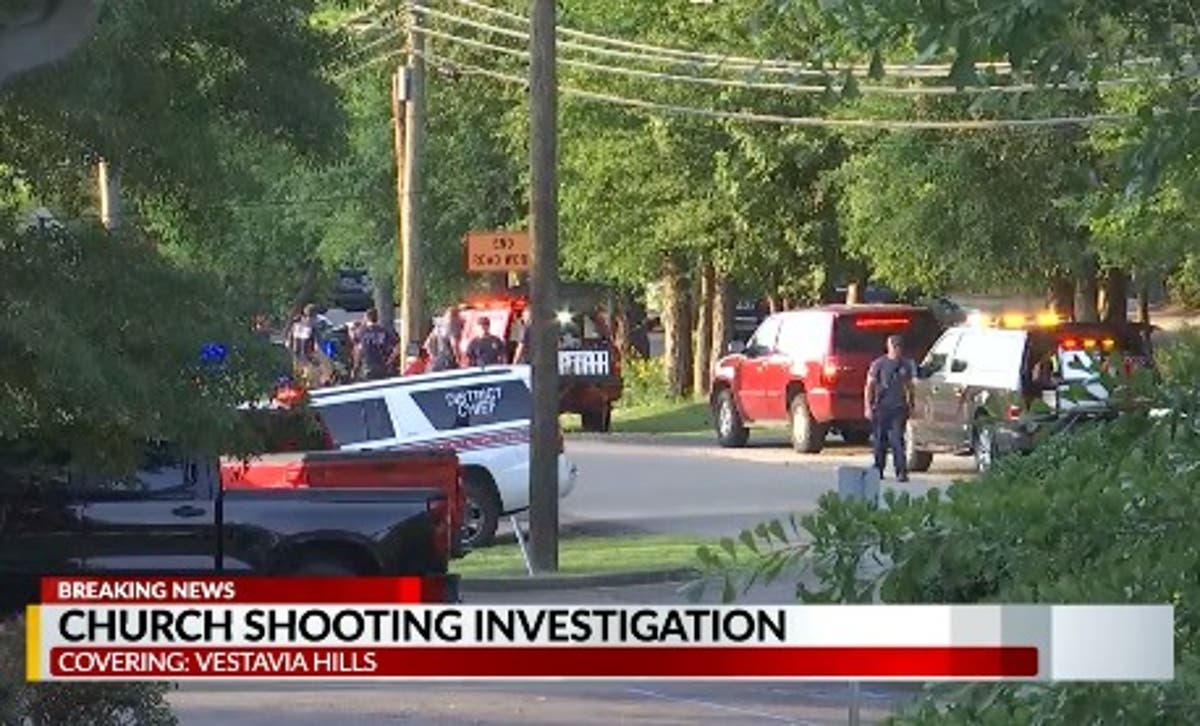 Two people were killed and one person injured in a shooting at a church potluck dinner in Alabama with the suspect taken into custody, according to police.

The Vestavia Hills police department said the violence unfolded at St Stephen’s Episcopal Church in the suburb of Birmingham on Thursday evening.

Officials initially reported one dead and two hurt, but the death toll later rose as one of the injured died at the hospital.

“Three persons at Saint Stephen’s Episcopal Church were shot,” an inital statement read. “Two victims are at a local hospital being treated. Sadly, one victim has died from their injuries. Again, the suspect is in custody. There is no additional threat to the community. The VHPD would like to express our gratitude to the numerous local and federal agencies that are providing assistance to us,” the police department said in a statement.

The identity of the suspect and more details about what unfolded at the church have not yet been given by authorities.

“I do want to reiterate to you that the suspect involved in this event is in custody, and that we know of no additional threat,” Vestavia Hills police captain Shane Ware told reporters at the scene.

According to the church’s website, there was a “Boomers Potluck” at 5pm in the Parish Hall.

“At approximately 6.22pm Central Time the Vestavia Hills Police Department responded to Saint Stephen’s Episcopal Church located at 3775 Crosshaven Drive Vestavia Hills, AL on a call of an active shooter. Multiple law enforcement agencies and fire departments responded to the scene. The VHPD confirms multiple people were shot. The suspect is in custody,” the department said in an earlier statement.

Authorities have not made public the nature or severity of the injuries suffered by the surviving victim.

Reverend Kelley Hudlow with the Episcopal Diocese of Alabama spoke to WVTM 13 at the scene of the shooting.

“We’re kind of like with everyone else, just waiting to learn more,” she said. “Currently we are praying for healing and safety.”

Police said numerous law enforcement agents, along with emergency crews, were at the scene and that more information would be made available later.

Vestavia Hills is a city of around 39,000 southeast of Birmingham.

Mayor Ashley Curry reacted to the shooting in a statement, saying: “With the tragic news that has broken this evening, I offer my heartfelt condolences to the victims of this evening’s shooting at St. Stephen’s Episcopal Church.

“I would also like to offer thanks on behalf of myself and our Vestavia Hills residents to the first responders from all agencies who have worked tirelessly since this incident began.”

Governor Kay Ivey also said she was monitoring the situation.

“As we are learning about the shocking and tragic loss of a life at St. Stephen’s Episcopal Church in Vestavia, we want to offer our prayers for the victim’s family, the injured and the entire church community. I am glad to hear the shooter is in custody,” she said.

“This should never happen — in a church, in a store, in the city or anywhere. We continue to closely monitor the situation.”

Biden says ‘just be you’ during LGBTQ celebration

Did Patriots Blow It by Passing on Lamar Jackson? – NBC Los…

gehlot: New generation should have an opportunity now:…