TWO-THIRDS of Americans are putting off medical care they need, survey finds 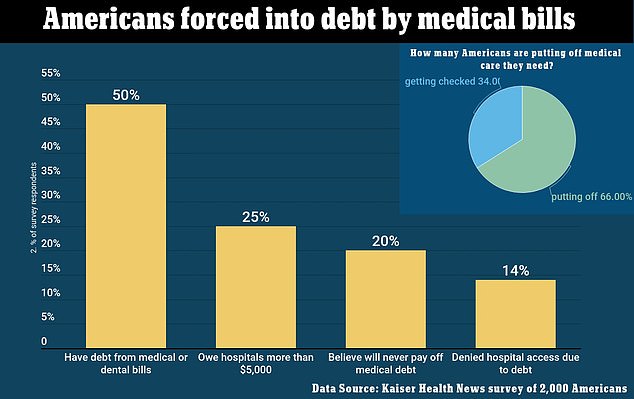 Two-thirds of Americans are putting off medical care they need because of the cost while half are struggling to meet existing debts, a survey revealed.

A poll by Kaiser Health News, laid bare the crippling price of health care many Americans facing for fractured limbs, dementia — and even cancer.

Doctors caring for low-income patients warned the system was ‘almost perfectly designed’ to force many families into debt.

Others said they had faced several cases where patients refused or gave up on the care they needed because of the time.

It comes against a backdrop of hospitals recording their most profitable year yet in 2019, the latest date figures are available. Current estimates suggest many continued to rake in funds during the COVID-19 pandemic. 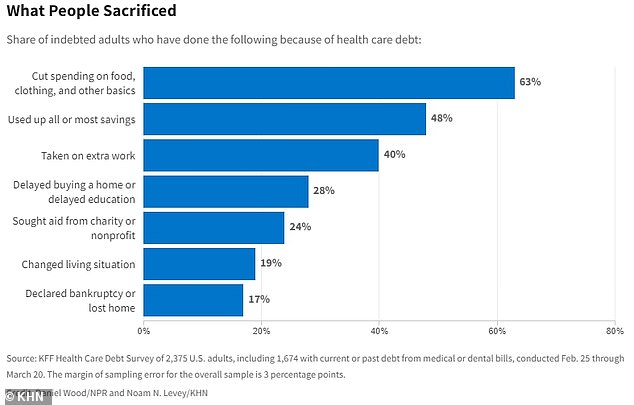 The above shows the proportion of adults in debt who have done the above in order to meet the costs. Most said they had cut back on basics to cover the debts 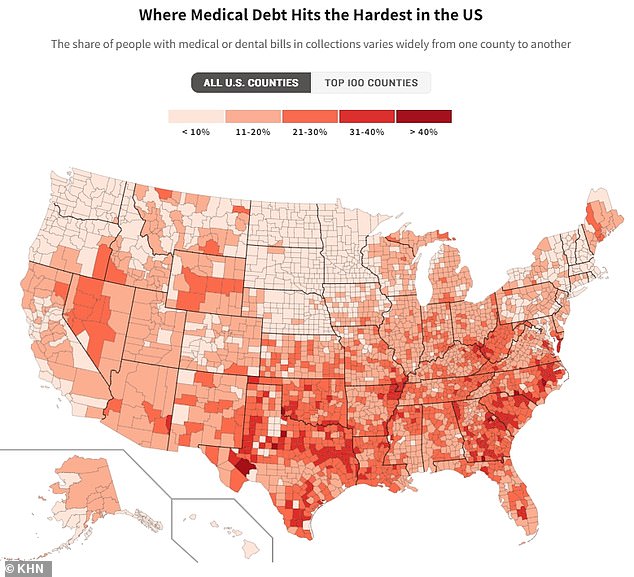 The above map shows the areas of the U.S. where the most people are in debt due to healthcare costs. Overall, Wyoming had the biggest medical debt per person while Massachusetts had the lowest

‘They took the joy of my twins birth’: Mother vents anguish at hospitals over crippling healthcare costs

A Chicago mother has revealed the eyewatering costs having twins with healthcare issues put on her family.

Ally Ward, neonatal nurse practitioner, said her and husband Marcus, were considering filing for bankruptcy after being charged $80,000.

The pair told how they sorted their finances before she got pregnant but said it made no difference.

Ally had twin boys Milo and Theo who were born 30 weeks premature and had cerebral palsy and other health problems.

Milo spent eight weeks in the ICU and Theo spent four months there.

It saw costs rocket above their insurance threshold and they owed $80,000.

Ally said the stress of it all took away some of the joy of having her boys.

She told CBS: ‘Instead of being able to be present in the experience of being a new mom and a new family, a lot of times, it was, ‘Oh, my gosh. How are we going to make this work?’

They were slapped with further problems in 2019 when they started getting charged for their then seven-year-olds’ therapy programs.

They claimed their insurance firm started back-charging them for sessions totaling $40,000. But they sued the firm and won, which cut the cost to a few thousand dollars.

Yet they are still paying back around $500 per month they owe from the twins birth near a decade later.

The survey saw more than 2,000 adults from across the country questioned about their healthcare either online or by phone.

The sample was designed to be ‘nationally representative’, including families with both high and low incomes.

Other findings from the survey included that a quarter of Americans are currently battling to pay off debts higher than $5,000 from medical or dental bills.

One-in-five also believe they will never be able to cover the costs of care they needed.

And as many as one-in-seven said they had been blocked from entering hospitals because of outstanding medical bills.

‘Debt is no longer just a bug in our system. It is one of the main products.’

Dr Miriam Atkins, an oncologist at Georgia’s Doctor Hospital of Augusta, said she’d faced several cases where patients gave up on care because of the cost.

She blasted the current system as ‘barbaric’.

Out of Americans struggling with healthcare bills, the survey revealed two thirds said they were cutting back on food, clothing and other basics to meet medical bills.

Half confessed to using up all or most of their savings that had been intended for retirement. And two in five said they had no choice but to take on extra work to cover the costs.

Nationally, people between 30 and 49-years-old were most likely to be in debt due to medical costs — at seven in ten — the survey found.

They were followed by people aged 50 to 64 years — six in ten — and those between 18 and 29 years — half of the total. People over 65 years were least likely to have the debt.

The figures came as hospitals logged their most profitable year in 2019 at 7.6 percent, according to figures from the Medicare Payment Advisory Committee.

It noted many hospitals had continued to thrive throughout the pandemic. 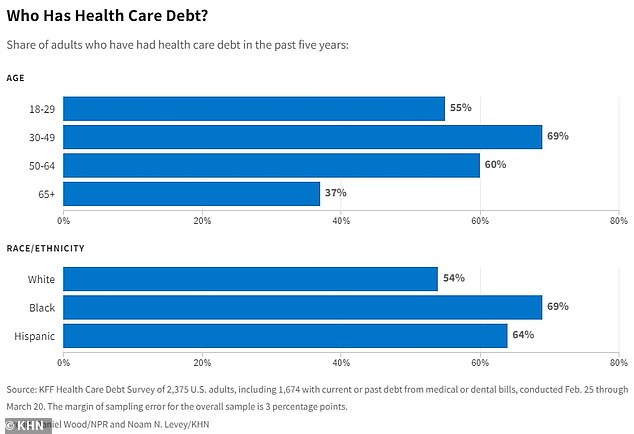 People aged 30 to 49 years old were most likely to be battling against medical costs, the survey revealed, while those who were over-65 were least likely to have the debts 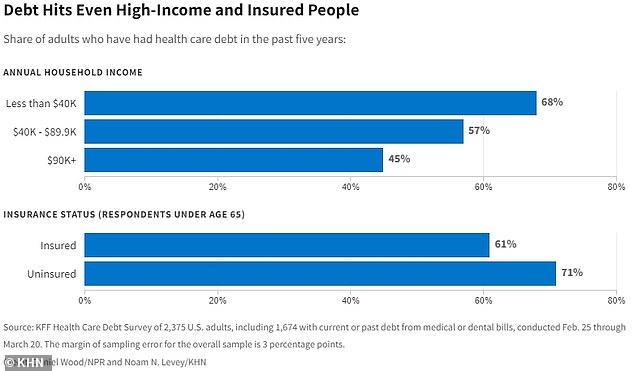 Politicians attempted to stymie the growth of medical debt with the landmark Affordable Care Act in 2010.

This lowered the cost of medical insurance for the poorest households — ensuring more people could get covered.

But many experts say the scheme hasn’t worked — with insurance companies instead shifting the cost of care onto patients.

President Joe Biden plans to improve healthcare access for millions of Americans by improving the act.

This would see them close a loop-hole where families who purchase health coverage through an employer are ineligible for a premium tax credit even though they need it to afford the coverage. This affects about 5 million people.

The American Hospitals Association — which represents healthcare providers — did not respond to a DailyMail.com request for comment.