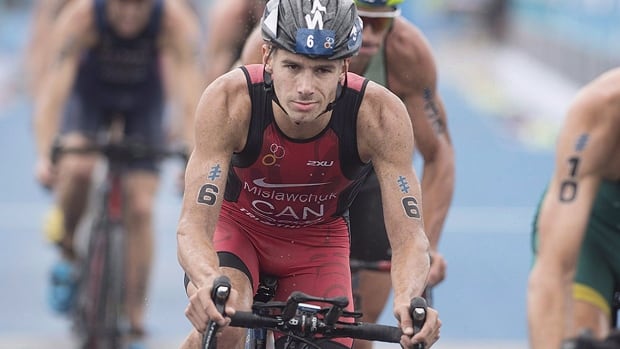 The two-time Olympian from Oak Bluff, Man., finished in 53 minutes 48 seconds, one second behind winner Genis Grau of Spain in a three-man foot race for the podium.

“This feels pretty darn good. You never know when your next [podium] is or when your last one is so after a year like last year with the Achilles tear, I wasn’t sure I’d ever be on one of these again,” Mislawchuk told Triathlon Canada. “I am thankful.

“I wasn’t even sure I’d make a start line about 12 days ago so I am really happy to be standing up here because it has been a long road.”

Brazilian bronze medallist Miguel Hidalgo was just two seconds back of Mislawchuk, who won the Huatulco race in both 2021 and 2020.

“It was a bit of a strange race,” said the 27-year-old Mislawchuk. “On the run it was kind of like a championship style track event where I pushed the first bit, but realized there was fifteen or twenty guys with us.

‘You never know when your last podium is’

“Tactical until the end and I got caught off guard going into the last corner. After I tore my Achilles [tendon] last year I didn’t know if I was ever going to be on one of these podiums again.

“You never know when your last podium is. I’ll enjoy this one.”

Mislawchuk won each of the previous two times he competed on the Huatulco race course.

“I like racing in the heat, but this is also likely the most chill race we do on the World Cup so I love it here,” said Mislawchuk, who has five World Cup podiums on his resume in addition to winning the Olympic test event in Tokyo and one third-place finish on the World Triathlon Championship Series.

After battling an Achilles injury following his second 15th-place finish at the Olympic Games last summer, Canada’s top triathlete found the joy in training and racing while hooking up with Marc-Antoine Christin, head coach of Triathlon Canada’s National Performance Centre in Victoria, this past winter.

“Thanks so much to my coach and my training group. The last few months have been a blast,” he said. “I love waking up every day and doing what I do. It is such an honour. Honestly, I’m blessed to do triathlon for a living.”

Other Canadian results from Huatulco:

Canadian triathletes also reached the podium Sunday in a World Para Cup in A Coruna, Spain.

Daniel, a four-time world champion who is a cross-country runner for the University of Calgary, lost time on his swim leg, but made up ground via the bike and run Sunday.

“I went off track in the water and lost quite a lot of time because of it,” Daniel said. “Once I got to transition, I was able to refocus and ride as hard as I could.

“I had the best ride of my career which I’m very proud of.”

He was second in a para World Cup in Besancon, France last week.

Frenette, who finished fourth in her Paralympic debut last summer in Tokyo, reached the podium again after finishing third in France.

“I’m very happy to be heading back home with two bronze medals in my suitcase,” she said.

“My goal today was to stay in control and follow my race plan, and I did exactly that. These last two weeks have been a great foundation to the 2022 season and I’m excited to keep building up from here.”

Grace Norman of the U.S. was first ahead of runner-up Claire Cashmore of Britain.