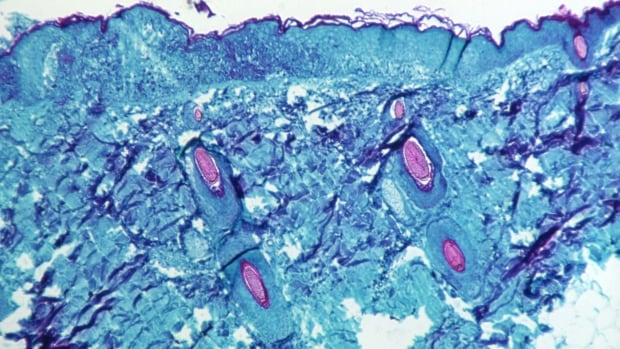 British health officials reported 77 more monkeypox cases on Monday, raising the total to more than 300 across the country. To date, the U.K. has the biggest identified outbreak of the disease outside of Africa, with the vast majority of infections in gay and bisexual men.

Health officials warn that anyone, regardless of their sexual orientation, is potentially at risk of catching monkeypox if they are in close contact with a patient, the patient’s clothing or their bed sheets.

On Sunday, the World Health Organization said more than two dozen countries that haven’t previously identified monkeypox cases had reported 780 cases, a more than 200 per cent jump in cases since late May. No monkeypox deaths outside of Africa have yet been identified.

The U.N. health agency said most cases in Europe and elsewhere have been spotted in sexual health clinics and “have involved mainly, but not exclusively, men who have sex with men.”

So far this year, there have been more than 1,400 monkeypox cases and 63 deaths in four countries where the disease is endemic — Cameroon, Central African Republic, Congo and Nigeria — according to the Africa Centers for Disease Control and Prevention. Genetic sequencing of the virus hasn’t yet shown any direct link to the outbreak outside Africa.

WHO said the sudden and unexpected detection of monkeypox in numerous countries “suggests that there might have been undetected transmission for some unknown duration of time followed by recent amplifier events.” Last month, a leading adviser to WHO said the outbreak in Europe and beyond was likely spread by sex at two recent raves in Spain and Belgium.

WHO estimated the risk posed by monkeypox to global health was “moderate,” saying this was the first time that so many cases and clusters had been reported across the world. Until last month, the disease had not been known to cause large epidemics beyond central and west Africa, where it has mostly affected people in rural areas who come into close contact with infected wild animals.

The ongoing outbreak of monkeypox in Europe and elsewhere, including Canada, Australia, Israel and the U.S., marks the first time the disease has been known to spread among people who have no previous travel links to Africa.

Canada has at least 77 confirmed cases of monkeypox, according to figures supplied Friday by Canada’s chief public health officer and Santé Québec, the provincial health ministry. Of the cases identified so far through laboratory testing, 71 are from Quebec, five are from Ontario and one is from Alberta.

U.S. health officials said genetic analysis of recent monkeypox cases suggests there are two distinct strains in the country, raising the possibility that the virus has been circulating undetected for some time. Many of the U.S. cases were caused by the same strain as recent cases in Europe, but a few samples show a different strain, U.S. federal health officials said.

Britain’s Health Security Agency said last week that most cases have been in gay or bisexual men ranging in age from 20 to 49, and that “investigations to date have identified links to gay bars, saunas, and the use of dating apps in the U.K. and abroad.”

Most monkeypox patients experience only fever, body aches, chills and fatigue. People with more serious illness may develop a rash and lesions on the face and hands that can spread to other parts of the body.

Last week, WHO’s top expert on monkeypox, Dr. Rosamund Lewis, said she doubted the disease would trigger a pandemic, but said actions should be taken quickly to curb its spread so it doesn’t become entrenched in new areas.

15,000 Minnesota nurses vote Wednesday on whether to strike for second time – Twin…