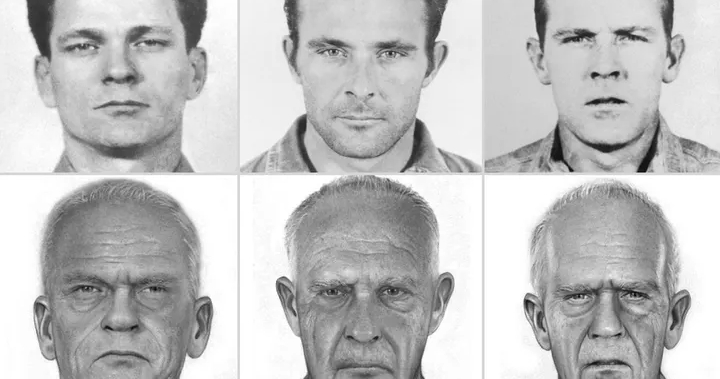 Sixty years after three men pulled off the escape of a lifetime from Alcatraz, the U.S. Marshals Service has released images of what they think the criminals may look like now.

Frank Morris, along with brothers Clarence and John Anglin, escaped from the infamous island penitentiary in 1962, tunneling their way out of the prison before using a rubber life raft they fashioned out of World War Two-era raincoats to sail away.

Guards investigating the escape at the time found dummy heads fashioned out of plaster, skin-toned paint and real human hair in the men’s beds.

The case went on to inspire the 1979 film Escape from Alcatraz, and to this day the three fugitives have never been found.

The U.S. Federal Bureau of Investigation (FBI) worked on the case for 17 years before officially closing the file in December of 1979 and turning it over to the U.S. Marshals Service.

Al Capone composed music in prison, which could sell for over $20k at auction

At the time, the FBI said there was “no credible evidence” to suggest the men were still living.

In an effort to solve the case once and for all, three age-progressed photos were released this month showing what each man could look like now. The men, who were all incarcerated for bank robbery, would be in their 90s today.

It’s been speculated that the trio could have drowned in their escape attempt, given the choppy, cold waters of San Francisco Bay. However, Supervising Deputy Mike Dyke of the U.S. Marshals Service told CBS News in 2011 that he thinks they likely survived.

“I think probably the brothers lived … but there’s a chance that all three of them could have lived and they just split up once they left. There’s no body recovered. I can’t close the case,” he said.

2:10
New letter purports to be from Alcatraz prisoner presumed to be drowned in 1962 escape

New letter purports to be from Alcatraz prisoner presumed to be drowned in 1962 escape – Jan 25, 2018

Morris and the Anglin brothers took more than a year to plan their escape and used spoons and a homemade drill to dig their way into the prison’s air vents and a utility corridor. From there, they climbed pipes to the prison roof and slid down a smokestack before setting out on the water.

The only trace left behind was the raft, found off nearby Angel Island, and what was believed to be part of a paddle. Once they hit the mainland, the group reportedly stole a car.

According to CBS News, John Anglin purportedly wrote a letter to the San Francisco Police Department in 2013, claiming that he was the only surviving member of the trio and that his brother died in 2011 and Morris in 2005.

The letter writer said he would disclose his location if he was promised on TV that he wouldn’t go to jail for more than a year and that he would be able to receive medical care for a cancer diagnosis.

“If you announce on TV that I will be promised to first go to jail for no more than a year and get medical attention, I will write back to let you know exactly where I am. This is no joke.”

CBS reports that the U.S. Marshals Service sent the letter to the FBI for analysis and the results came back inconclusive.

The U.S. Marshals Service is asking anyone with information about the escapees to get in touch, saying their investigation “serves as a warning to fugitives”.

“Regardless of time, we will continue to look for you and bring you to justice,” it said.