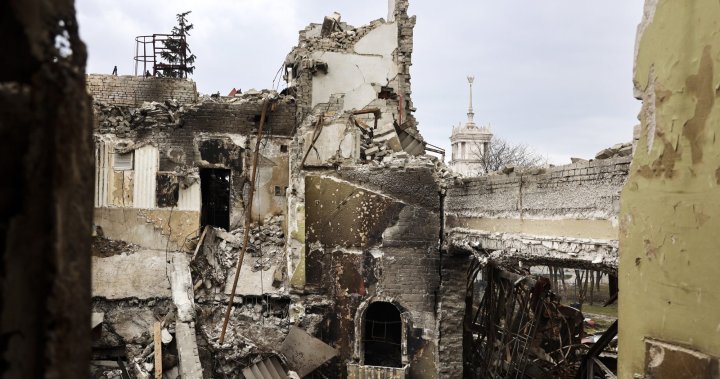 The Pentagon says it is closely monitoring reports of what could be the first use of chemical weapons by Russia in the ongoing war in Ukraine — a potential red line in the conflict.

In a statement to Global News Monday night, spokesperson John Kirby said if verified, the report from Ukrainian fighters of a chemical weapon attack in the heavily besieged city of Mariupol was “deeply concerning.”

“We cannot confirm at this time and will continue to monitor the situation closely,” the emailed statement said about what Kirby called “social media reports.”

Azov Battalion, a nationalist military unit fighting to protect Mariupol, reported on its social media channels late Monday night that a “poisonous substance” had been dropped from a Russian drone earlier that evening.

Tens of thousands dead in Mariupol, Zelenskyy says amid plea to South Korea for arms

It said the unknown substance caused victims to suffer respiratory failure and symptoms of vestibulo-atactic syndrome, a neurological disorder.

Battalion leader Andriy Biletsky said in a video posted to Telegram that three victims had signs of chemical poisoning, but added he expected them to recover without any “disastrous consequences” for their health. He did not say whether the victims were soldiers or civilians.

Ukrainian MP Ivanna Klympush also reported the attack on social media, citing Azov’s report, calling the potential use of a chemical weapon “a red line” that must be met with international action.

2/2 This morning #Russians threatened to use “chemical troops” against Mariupol’s defenders. Now #Azov reports #RU did it. #Russia will not stop until it is stopped!

Azov’s report was also cited by the Mariupol City Council, who shared the battalion’s post on its Telegram page.

A verified Twitter account for the Strategic Communications Directorate for the Chief of Defence of the Ukrainian Armed Forces said chemical weapons had been used “against Ukrainian soldiers and civilians in Mariupol” but did not provide further details.

Global News has not been able to independently verify the report of the attack or the alleged symptoms of any victims. Requests for comment from Ukraine’s military, defence ministry and foreign ministry were not returned.

No evidence was given by anyone from the Azov Battalion to confirm the alleged attack.

“Any use of such weapons would be a callous escalation in this conflict and we will hold Putin and his regime to account,” she said on Twitter.

Reports that Russian forces may have used chemical agents in an attack on the people of Mariupol. We are working urgently with partners to verify details.

Any use of such weapons would be a callous escalation in this conflict and we will hold Putin and his regime to account.

NATO and Western leaders have been warning for weeks that Russia was potentially preparing to use chemical weapons in its long-stalled invasion of Ukraine.

U.S. President Joe Biden said last month that such an attack by Russia “would trigger a response in kind” from the military alliance.

Moscow has denied it is planning to use chemical weapons. It has instead accused Ukraine of plotting such an attack on Russian forces, which the West has said is a likely pretext for Russia.

Yet multiple Ukrainian officials on Monday pointed to comments made to Russia media by Eduard Basurin, a spokesperson for the Russian-backed Donetsk People’s Republic, who suggested “chemical troops” should be deployed in Mariupol.

Ukrainian President Volodymyr Zelenskyy referred to those comments in a late-night video address, saying officials are treating the possibility of chemical weapons “with the utmost seriousness.”

Zelenskyy said earlier Monday that “tens of thousands” of people have been killed in Mariupol alone due to constant Russian shelling and missile attacks.

The city’s mayor Vadym Boychenko told the Associated Press the death toll was more than 10,000, while about 120,000 civilians are in dire need of food, water, warmth and communications.

The death toll has not been independently verified, although widespread destruction has been documented by civilians and journalists on the ground. The southeastern port city is considered a key target of Moscow.

Is Northern Ireland vs England on TV? Kick-off time, channel and how to watch World Cup qualifier