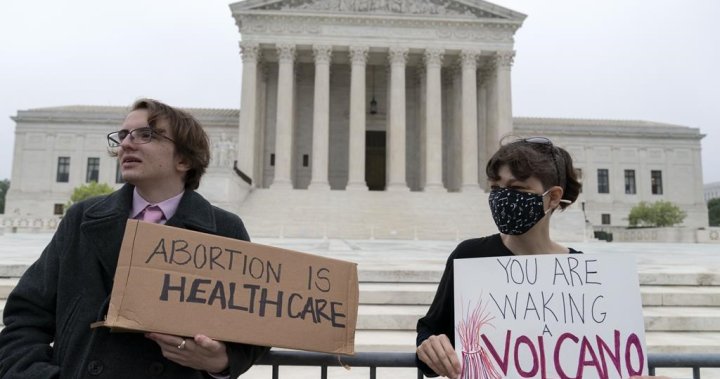 The U.S. Supreme Court has overturned the landmark Roe v. Wade ruling that has guaranteed the right to an abortion for more than 50 years, creating a grim new reality for women’s health in the country while granting a significant victory to religious conservatives.

In a 6-3 decision Friday, the top court upheld a Mississippi law that would ban most abortions after the 15th week, effectively abolishing the legal precedent Roe v. Wade established in 1973.

Chief Justice John Roberts sided with the court’s three liberal-leaning justices, unable to sway even one member of the solid conservative majority.

The question of whether abortions are legal will now be left up to individual states, which will lead to widespread differences in access across the U.S.

The court’s decision on the Mississippi case had been foretold since May, when Politico published a draft opinion from Justice Samuel Alito that called Roe v. Wade “egregious from the start” and argued it should never have been treated as precedent.

Although the court warned the document, which had been written in February, was an early draft and would evolve before the final decision was released this summer, it sent shockwaves through the country and sparked mass pro-choice protests.

An attempt by Congress to enshrine the right to an abortion as federal law, along with other women’s health protections, died in the Senate days after the draft was leaked due to Republican opposition.

The overturning of Roe v. Wade will be immediately felt in several states.

Thirteen states — including Texas, Louisiana, Kentucky and Tennessee — have so-called “trigger laws” in place that ban abortion entirely, and are written to go into effect within a month of the Supreme Court’s ruling. Some include financial penalties or prison sentences for patients and medical practitioners who perform an abortion.

Another dozen states are likely to follow suit and pass similar bans, according to the Guttmacher Institute, a think tank that supports abortion rights.

Some of those states, such as Florida, have recently passed bills that ban most abortions as they waited for the Supreme Court to rule on the Mississippi case. Those laws are more likely to withstand court challenges in the wake Roe v. Wade’s downfall.

Only some of those laws make exceptions for rape and incest, while most say they will allow abortions only if the mother’s life is at stake if they try to give birth.

Sixteen states as well as Washington, D.C., have laws in place that protect the right to abortion, including California, New York and most of the U.S. northeast.

Abortion advocates have warned the banning of abortions in some states will force women seeking the procedure to travel to more permissible states and countries. That could overwhelm providers in those jurisdictions while also putting undue financial and medical burden on women, those advocates say.

In Canada — where abortion is decriminalized but not enshrined into law and access varies — experts have predicted an American surge could lead to increased wait times and shortages of abortion pills.

A decision long fought for

Pro-life advocates and religious conservatives have spent the decades since Roe v. Wade was decided trying to get it overturned, working to install judges to the Supreme Court who aligned with their stance on abortion.

Past legal challenges have been rejected by the court or have failed, including in 1992, when justices ruled in favour of maintaining a woman’s right to choose in Planned Parenthood v. Casey despite allowing more regulation by the states.

How the wave of U.S. restrictions will affect Canadian women sent there for abortions

Yet the appointment of Neil Gorsuch, Brett Kavanaugh and Amy Coney Barrett to the bench by then-president Donald Trump — all of whom have voiced opposition to abortion — saw conservative states pass a flurry of new abortion restrictions that would automatically face court challenges.

Some Conservative MPs reluctant to discuss abortion rights – May 4, 2022

The Mississippi case was the first one the Supreme Court agreed to hear, and in oral arguments last December, Trump’s nominees along with Alito and Justice Clarence Thomas — both of whom have long argued against Roe — hinted they were leaning toward siding with the state’s restrictive abortion law.

Gorsuch, Kavanaugh and Barrett were included on a list of judges approved by the Federalist Society, a conservative legal organization that promotes a strict and traditionalist reading of the U.S. Constitution.

Although Barrett has been vocal about her opposition to abortion, Gorsuch and Kavanaugh told senators during their confirmation hearings that they would respect the precedent created by Roe v. Wade and Planned Parenthood v. Casey, which they said was “settled law.”

‘I Make Theatrical Movies To Be Seen In Cinemas’

How many more miles can I drive when my car fuel light is on?