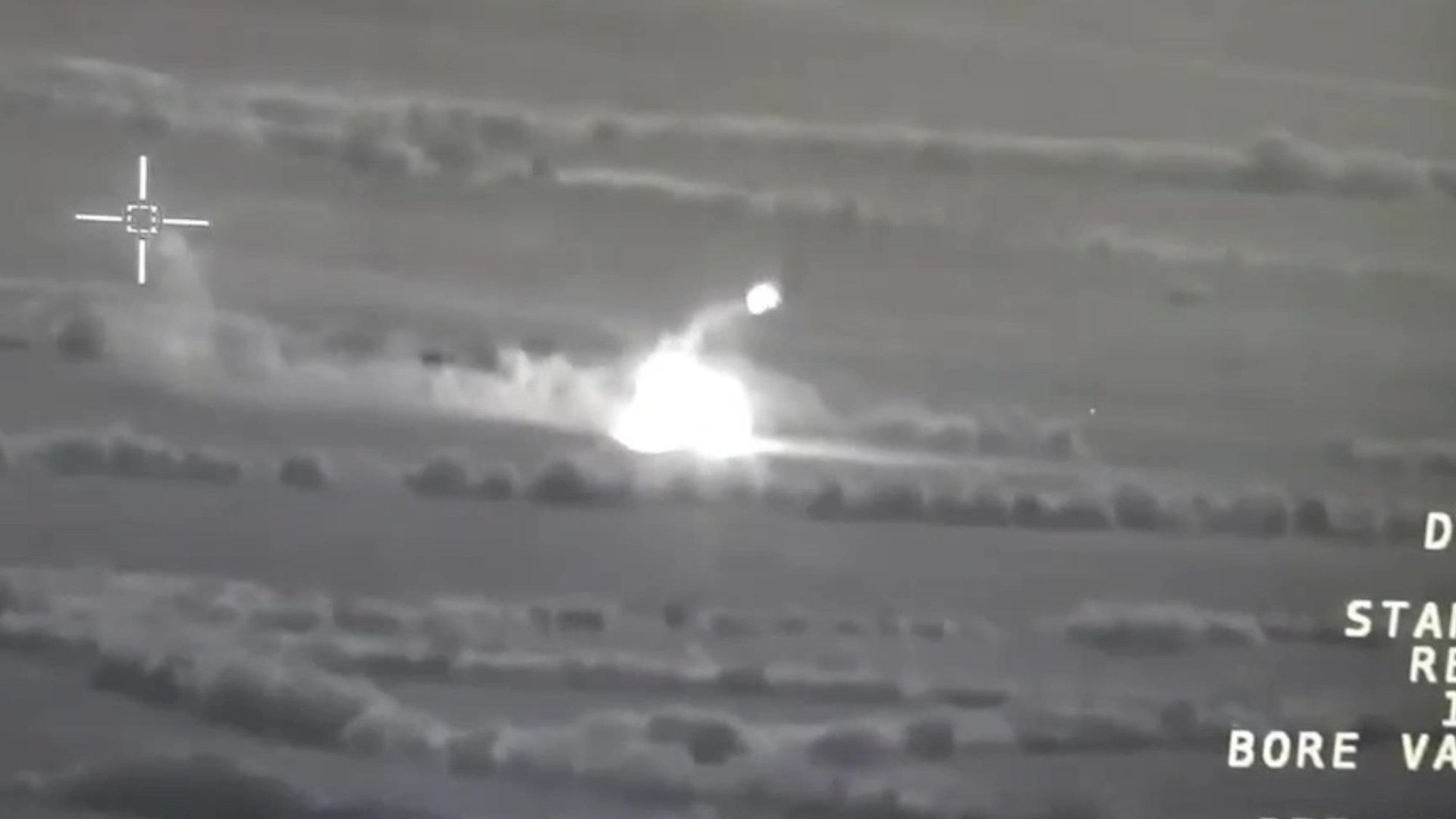 DRAMATIC Call-of-Duty-style footage showed the moment Ukrainian forces blasted a Russian helicopter out of the sky.

The clip shared by Joint Forces Task Force of Ukraine, reportedly shows the chopper being downed on October 1, Pravda reports.

Two Ka-52 were destroyed as well as 3 Orlan-10 UAVs and one kamikaze drone in the past 24 hours, the Task Force reported.

The black and white footage shows the chopper being tracked in eastern Ukraine before it explodes and hits the ground and burst into a ball of flames.

After being encircled by fierce Ukrainian forces, Russia pulled its struggling soldiers out of the eastern city of Lyman just hours ago.

In a video posted by the Ukrainian president’s chief of staff, two grinning Ukrainian soldiers were seen taping the yellow-and-blue national flag onto the welcome sign at the city’s entrance.

“October 1. We’re unfurling our state flag and establishing it on our land. Lyman will be Ukraine,” one of the soldiers said, standing on the bonnet of a military vehicle.

Russia was forced to admit defeat and withdraw after an assault near Bakhmut and Saitseve in Donetsk and are now forcibly mobilising residents in Melitopol and Berdyansk.

Russia used Lyman as a logistics and transport hub for its operations in the north of the Donetsk region.

And its fall is Ukraine’s biggest battlefield gain since a lightning counteroffensive in the northeastern Kharkiv region last month.

A Ukrainian military spokesperson said the capture of Lyman would allow Kyiv to advance into the Luhansk region.

“Lyman is important because it is the next step towards the liberation of the Ukrainian Donbas,” he said.

Russia’s Ministry of Defence said: “Allied forces were withdrawn from the settlement of… Lyman to more advantageous lines because of the creation of the threat of encirclement.”

Russia has the world’s largest atomic arsenal – including low-yield tactical nuclear weapons designed to be deployed against opposing armies.

Other top Putin allies, including former president Dmitry Medvedev, have suggested Russia may need to resort to nuclear weapons – but Kadyrov’s call was the most urgent and explicit.

The fall of Lyman is a major setback for Moscow after Putin declared four regions in Ukraine as part of Russia on Friday – including Donetsk, where Lyman is located.

But Ukraine and its Western allies branded Russia’s move as illegal – and Kyiv vowed to continue liberating its land.

Jens Stoltenberg, who heads the Western military alliance, said Putin’s shameless landgrab would not stop NATO from providing its “unwavering support” to Ukraine.

“Together, this represents the most serious escalation since the start of the war.

“We remain resolute in providing support to Ukraine as it continues to defend itself against Russia’s aggression, for as long as it takes.”

In recent days Ukraine officially applied for NATO membership with 10 countries now saying they would support the move.

President Volodymyr Zelensky signed off the paperwork on Friday for fast-track membership to the alliance to “protect our entire community” following Putin’s rambling speech.

Too good to be true: Man buys Rolls-Royce for $50k before learning it was stolen –…

Woman saved by miscarriage which stopped breast cancer being…

End of an era: Boeing’s final 747 jumbo jet leaves its…