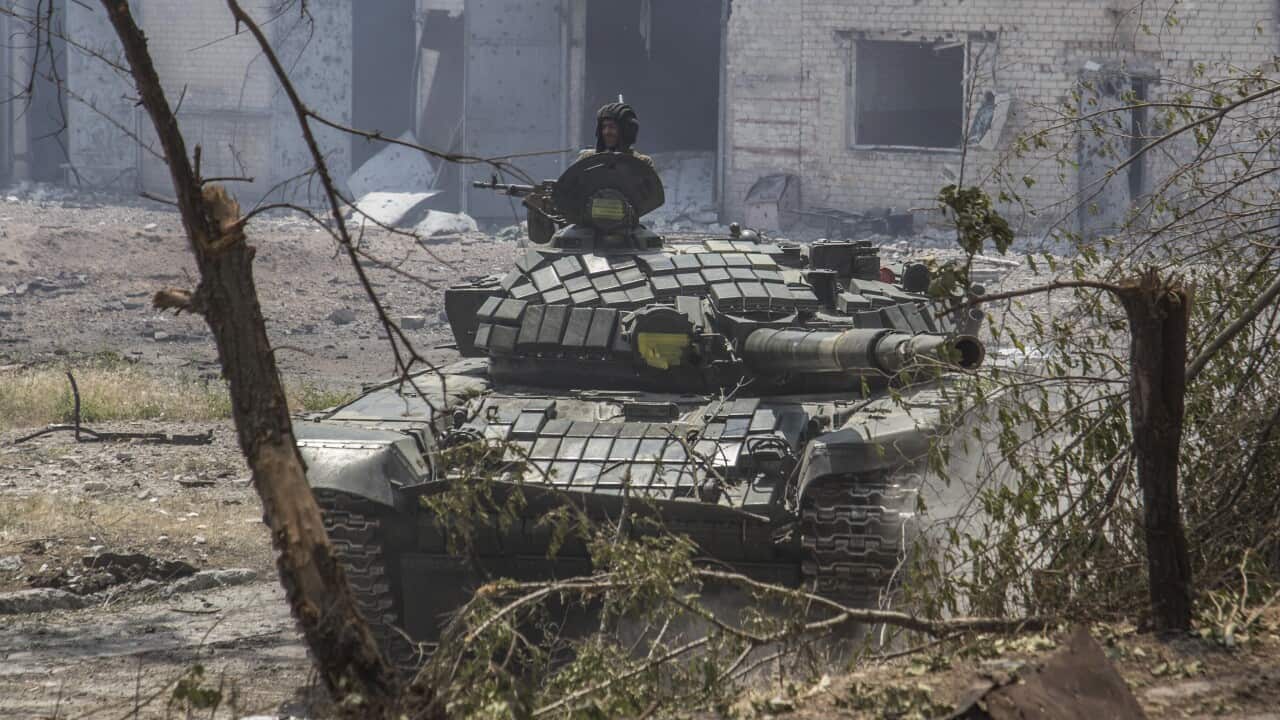 Ukraine is losing between 100 to 200 troops on the front line every day amid heavy fighting in the eastern Donbas region, an adviser to President Volodymyr Zelenskyy says.
Mykhaylo Podolyak revealed the grim death toll estimation in an interview with the BBC, amid intense clashes between Kyiv and Moscow’s forces in Severodonetsk — a small industrial city that has been bombed to ruins.

Ukrainian forces say they are holding their positions in intense fighting in the eastern city and have retaken ground in the south, targeting gains in the biggest swathe of territory seized by Russia since the invasion started.

But Ukraine says its only hope to turn the tide toward victory is more artillery to offset Russia’s massive firepower, a point Mr Podolyak doubled down on in his interview with the UK’s national broadcaster.

He told the BBC that Moscow’s forces have “thrown pretty much everything non-nuclear at the front” and there was a “complete lack of parity” between the Russian and Ukrainian armies.
“Our demands for artillery are not just some kind of whim … but an objective need when it comes to the situation on the battlefield,” he said.
Mr Podolyak’s death toll estimate is higher than Mr Zelenskyy’s, who said in April that Ukraine believed .

Severodonetsk, and its twin city Lysychansk on the opposite bank of the Siverskyi Donets river, are the last Ukrainian-controlled parts of Luhansk province, which Moscow is determined to seize as one of its principal war objectives.

“They (the Russians) are dying like flies … fierce fighting continues inside Severodonetsk,” Luhansk governor Serhiy Gaidai said, predicting the Russians would try to take advantage of low water levels to cross the Siverskyi Donets river.
“We are watching and if anything happens we will act proactively.”
In the south, where Moscow is trying to impose its rule on a tract of occupied territory spanning Kherson and Zaporizhzhia provinces, Ukraine’s defence ministry said it had captured new ground in a counter-attack.
Mr Zelenskyy said in an evening address Ukraine also had “some positive developments in the Zaporizhzhia region, where we are succeeding in disrupting the occupiers’ plans”.
He also said Ukrainian forces were gradually advancing in the Kharkiv region, east of Kyiv, “liberating our land”.
It is also in Kharkiv where Ukrainian students held their graduation dance in front of the ruins of their school.

Russian forces destroyed the school after they invaded Ukraine on 24 February and then used it as an outpost, Ukraine’s foreign ministry said.

Speaking in Moscow to mark the 350th anniversary of Russian Tsar Peter the Great’s birth, President Vladimir Putin drew a parallel between what he portrayed as their historic quests to win back what he called Russian lands.
“Peter the Great waged the Great Northern War for 21 years,” he said.
“It would seem that he was at war with Sweden, he took something from them. He did not take anything from them, he returned (what was Russia’s).”

In a rare update from Severodonetsk, the commander of Ukraine’s Svoboda National Guard Battalion, Petro Kusyk, said Ukrainians were drawing the Russians into street fighting to neutralise any artillery advantage.

“Yesterday was successful for us – we launched a counteroffensive and in some areas we managed to push them back one or two blocks. In others they pushed us back, but just by a building or two,” he said in a televised interview.
But he added his forces were suffering from a “catastrophic” lack of counter-battery artillery to fire back at Russia’s guns.
Getting such weapons would transform the battlefield, he said.
Severodonetsk Mayor Oleksandr Stryuk said around 10,000 civilians were still trapped inside the city – around a tenth of its pre-war population.

To the west of Severodonetsk, Russia is pushing from the north and south, trying to trap Ukrainian forces in the Donbas region comprising Luhansk and the neighbouring Donetsk province.

Smoke rising amid shelling in the city of Severodonetsk. Russia has concentrated its troops and firepower on the small industrial city in recent weeks. Source: Getty, AFP / Aris Messinis

In the self-proclaimed Donetsk People’s Republic, one of Russia’s proxies in eastern Ukraine, a court sentenced two Britons and a Moroccan who were captured while fighting for Ukraine to death, Russian news agencies reported.

Britain slammed the court’s decision as a “sham judgement” with no legitimacy.
Ukraine is one of the world’s biggest grain and food oil exporters, and international attention has focused in recent weeks on the threat of international famine from Russia’s blockade of its neighbour’s Black Sea ports.
“Millions of people may starve if the Russian blockade of the Black Sea continues,” Mr Zelenskyy said on Thursday.
Moscow blames the food crisis on Western sanctions restricting its own grain exports.
It says it is willing to let Ukrainian ports open for exports if Ukraine removes mines and meets other conditions. Kyiv calls such offers empty promises.
Turkey, a NATO power with good relations with Kyiv and Moscow, has tried to mediate.
Russia has also been trying to sell grain from areas of Ukraine it seized, activity Kyiv and the West have described as looting.

Asked if any deal had been reached to sell grain from southern Ukraine to Turkey or a Middle Eastern country, Kremlin spokesman Dmitry Peskov said: “So far no agreements have been reached, work is continuing.”