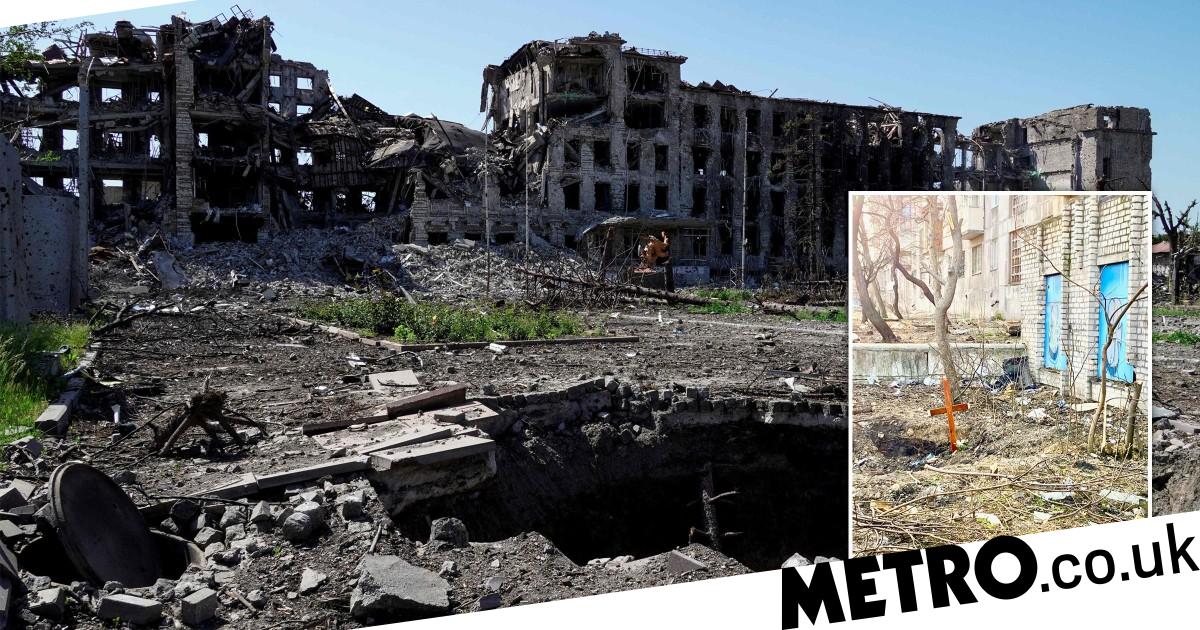 The missile that landed outside 74-year-old Hryhory’s Mariupol home left a crater measuring 10 feet across and six feet deep.

When he died weeks later through lack of access to medical help, his son Maksym Kasianczuk lowered his body into it and buried him there.

Maksym fears he will never return to his home city, the place he was raised by his father and where he buried him with his bare hands.

The LGBTQ+ activist was caring for frail and blind Hryhory when Russian forces surged into Ukraine on February 24.

The southern port city was immediately in the Kremlin’s crosshairs and a brutal siege began which would last for almost three months.

Maksym saw 53 days of its terror, misery and starvation. He was reduced to melting snow for drinking water when the supply was cut off.

The story of his father’s burial, living in fear of his political activity being uncovered and his narrow escape is one of countless nightmares to have been played out in Mariupol.

He told Metro.co.uk: ‘There was no water, there was no food. We were just waiting for death to come from the never ending missiles.’

Mariupol, he says, is ‘ruined’. The remains of the city are now under the control of Russia’s occupation force and cholera has begun to spread.

Recounting the brutal military assault, Maksym said: ‘In the first days of the invasion, Russian military vehicles started to come down the wide roads.

‘Every 50 metres they would stop and bomb anything, business or homes, and keep going until there was nothing left to see.

‘After that the jets arrived. It would be the whole day and night, dropping 30 bombs at a time’

Makysm’s home was just a kilometre away from Ukrainian military positions so he would see and hear it all, including what he said was white phosphorus in the sky.

With a history of LGBTQ+ activism stretching back to the late 1990s, he was in even more danger than most.

Russian forces are scouring occupied territories for anyone linked to the 2014 Euromaiden revolution, Maksym said.

We will be splitting the funds with akt, a charity dedicated to supporting young homeless LGBTQ+ people.

Equality campaigners, considered no more than pro-Western stooges by the Kremlin’s intelligence network, are at risk where its forces have established control.

Maksym said: ‘Russian soldiers can be openly homophobic and face no consequences, whatever they’ve done.

‘If they found out you are involved in any activism movement, especially if its associated to Euromaiden, it’s dangerous.’

Maksym, who went public with his political activities in 2008, fears it ‘would most certainly have meant instant death’ if they had figured out who he was.

At the time, he was sub-letting a room to another gay man who came to the attention of Russian soldiers.

‘They attempted to rape him because he was wearing an earring’, Makysm said, ‘but another group of Russian soldiers stopped them from doing it’.

According to accounts of human rights abuses uncovered in areas liberated by Ukrainian troops, others have not been so lucky.

After his father’s death, he started to look for any way out of Mariupol but the only option he could access was a Russian ‘evacuation’, one that would take him further into occupied Ukraine, not away from it.

He said: ‘The evacuation was “optional” because nobody forced me to leave, but the choice is between going to Russia or dying in Mariupol sooner rather than later.’

Maksym was taken into the Donetsk People’s Republic, an eastern region of Ukraine which has been partly held by pro-Moscow forces since 2014.

It is these territories on Russia’s border that Vladimir Putin says he is ‘liberating’.

He was taken to a filtration camp in a school, where he was made to sleep on a wooden desk while he awaited questioning from FSB agents.

When his interrogation finally came, the Kremlin’s spooks botched it, failing to uncover anything which would have marked Maksym out as an undesirable.

He recalled: ‘Fortunately the FSB agents who questioned me did not speak Ukrainian so they did not manage to find anything out from me.

‘If they had known the language I think they would have…the questioning was happening without any sort of protocol and there was no torture.’

Once he was granted permission to leave the camp, he crossed over the Russian border and traveled hundreds of miles by taxi to the Latvian border, from where he relates his survival story.

Lenny Emson, the director of Kyiv Pride, has warned LGBTQ+ activists are ‘disappearing’ in occupied Ukraine, forced underground or worse.

Maksym became one of them, forced to ‘disappear’ himself in order to slip past the FSB men sent to root out people like him, campaigners committed to freedom and equality.

He said: ‘From my personal experience, after the Russians brought their “peace”, all the community organisations have vanished.’

His boyfriend remains in occupied territory, unable to leave because he is eligible to be called up to fight – against Ukraine.


MORE : Meet the brave activists fighting for LGBT rights on the frontline in Ukraine

Maksym dreams of living in the country which fought to come into being in 2014, a Ukraine with closer ties to Europe and the stronger protections for minorities that entails.

The ultimate fight, he says, is to be part of a Western community ‘so we could see the rights of other communities grow’.

But for now, the fight is a more prosaic and brutal one, played out in trenches dug deep into the soil of eastern Ukraine.

‘Unfortunately’, Maksym said, ‘the only way we can beat evil is with force’.