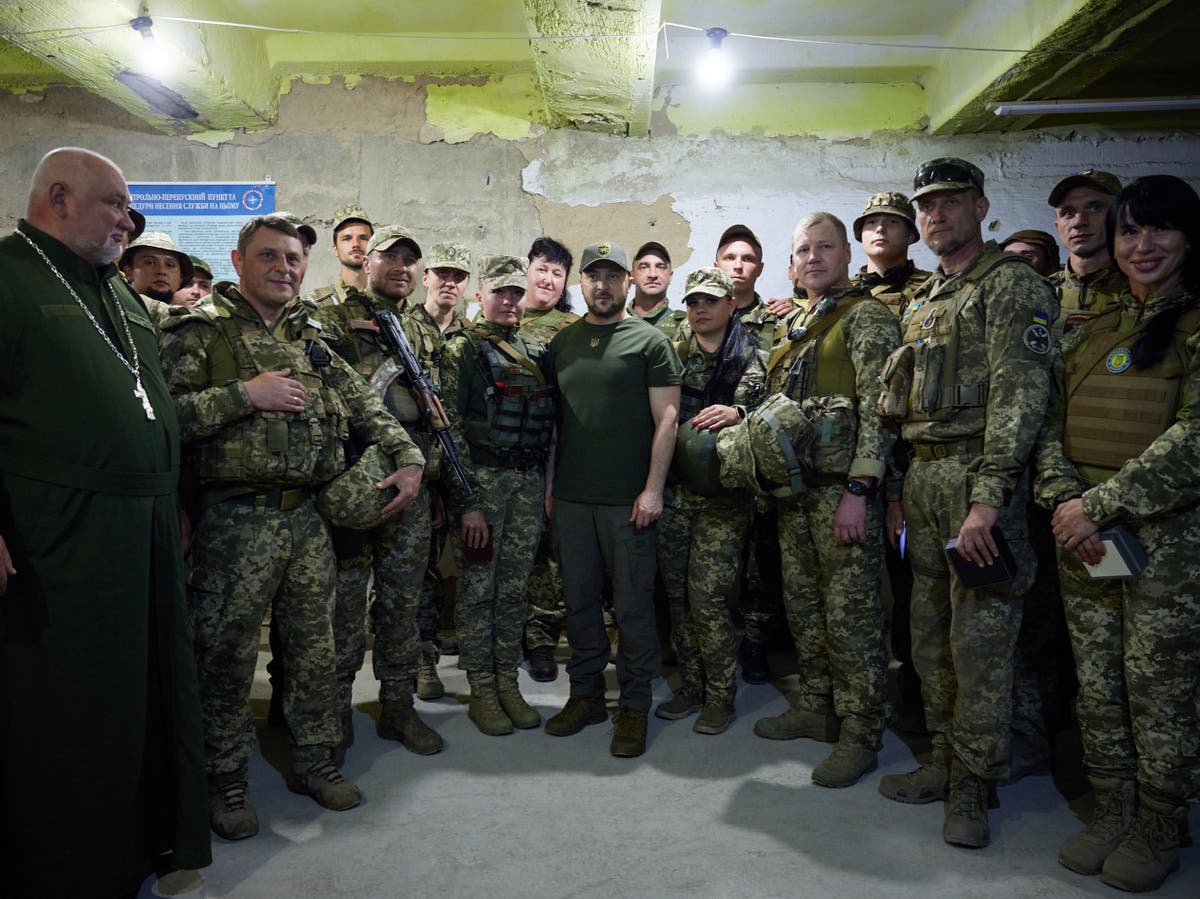 Ukraine’s president has visited soldiers on the front line in the south of his country under siege, calling them “brave men” who are “working flat out”.

Volodymyr Zelensky made a trip to Mykolaiv, where he went to see troops in the region and the Black Port city itself.

In his trademark khaki t-shirt, the president handed out medals and posed for selfies with the servicemen in what appeared to be an underground shelter, according to a video posted to Telegram.

Mr Zelensky was also seen visiting a hospital in Mykolaiv, as well a destroyed regional administration building, where a rocket killed 37 in late March.

Russian forces reached the outskirts of the city at the start of the same month but were driven back to the eastern and southern edges of the region, where fighting is ongoing.

A total of about 33,600 Russian troops have died during their invasion of Ukraine.

This is according to the General Staff of the Armed Forces of Ukraine.

The war in Ukraine “could take years” to come to an end, Nato secretary-general Jens Stoltenberg has said.

He told the German weekly newspaper Bild am Sonntag: “We must prepare for the fact that it could take years.

“We must not let up in supporting Ukraine. Even if the costs are high, not only for military support, also because of rising energy and food prices.”

Earlier this week, he said that a Nato summit later this month is expected to agree on an assistance package for Ukraine that will help the country with the move from old Soviet-era weaponry to Nato standard gear.

Third US military volunteer in Ukraine is missing

A third American volunteer fighting in Ukraine has been reported as missing amid concerns that all three may have been captured by Russian or pro-Russian forces.

The family of the former Marine Corps officer Grady Kurpasi disclosed that he had been missing in the Kherson area since late April following the earlier disclosure that two other American military veterans had lost contact with their families.

5 civilians killed, 12 injured in a Ukrainian bombardment of Donetsk

Five civilians were killed and 12 injured in a Ukrainian bombardment of the eastern separatist city of Donetsk, local authorities said on Saturday (18 June).

They wrote on Telegram: “As a result of the bombardment by Ukrainian forces, five people were killed and 12 others were wounded in the Donetsk People’s Republic.”

Zaporizhzhia governor Oleksandr Starukh said that Russian forces are attempting to suppress local resistance with the introduction of the death penalty.

“Ukrainian guerillas will continue to resist,” he said, according to The Kyiv Independent.

Meanwhile, in a post on Telegram, the Zaporizhia Regional Military Administration said “the occupiers are trying to intimidate the local population and suppress any resistance movement by imposing the death penalty”.

“But Ukrainian guerrillas will continue to resist,” it added. “At this time, the occupiers continue to fight among themselves for power and finances.”

Germany to send additional howitzers to Ukraine in coming weeks

German Ambassador to Ukraine Anka Feldhusen said on Saturday that Germany will send additional howitzers to Ukraine in the coming weeks.

She added that MLR systems were also on their way, according to The Kyiv Independent.

Two top commanders of fighters who defended the Azovstal steel plant in Ukraine’s southeastern port of Mariupol have been transferred to Russia for investigation, Russia’s state news agency TASS reported.

Citing an unnamed Russian law enforcement source, TASS said late on Saturday that Svyatoslav Palamar, a deputy commander of the Azov battalion, and Serhiy Volynsky, the commander of the 36th Marine Brigade of the Ukrainian Armed Forces, were moved to Russia.

Special forces officers transferred them from Donetsk, an eastern Ukrainian province that Moscow recognises as a pro-Russian republic, “to conduct investigative activities with them”.

“Other officers of various Ukrainian units were also transported to Russia,” the law enforcement officer said.

Ukraine has not yet responded to these claims.

The 56-year-old actor has teamed up with the United Nations High Commissioner for Refugees to meet and amplify support for those fleeing Ukraine amid the country’s ongoing war prompted by Russia’s invasion.

In an Instagram post shared on Saturday (18 June), the Zoolander star shared that he is currently in Poland. “I’ve just arrived in Poland with UNHCR, to meet families whose lives have been torn apart by war and violence in Ukraine,” he wrote. “Millions have been forced to flee their homes with over 90 per cent being women and children.”

Visiting the city of Mykolaiv on Saturday, he inspected damaged buildings and met soldiers, officials and health workers.

The Ukrainian leader also visited the western city of Odesa, which has been subjected to constant Russian shelling since the war began.

Both cities are targets in Russia’s efforts to seize the Black Sea coast.

Delays to £350 ‘thank you’ for UK refugee hosts, charity says

Britons who have opened their homes to Ukrainian refugees are facing a postcode lottery over how quickly they get their monthly £350 “thank you” payment from the UK government, according to a charity.

Some delays have reportedly caused financial problems that ended with guests having to leave.

The Homes for Ukraine scheme allows those fleeing the war with Russia to come to the UK to stay in the homes of Britons sponsoring them.

The government is giving these hosts – who are committing to at least six months – £350 a month as a “thank you”.But a charity has claimed there are issues with the rollout of this money.

‘From the very beginning’: Nationals retire Ryan Zimmerman’s No. 11