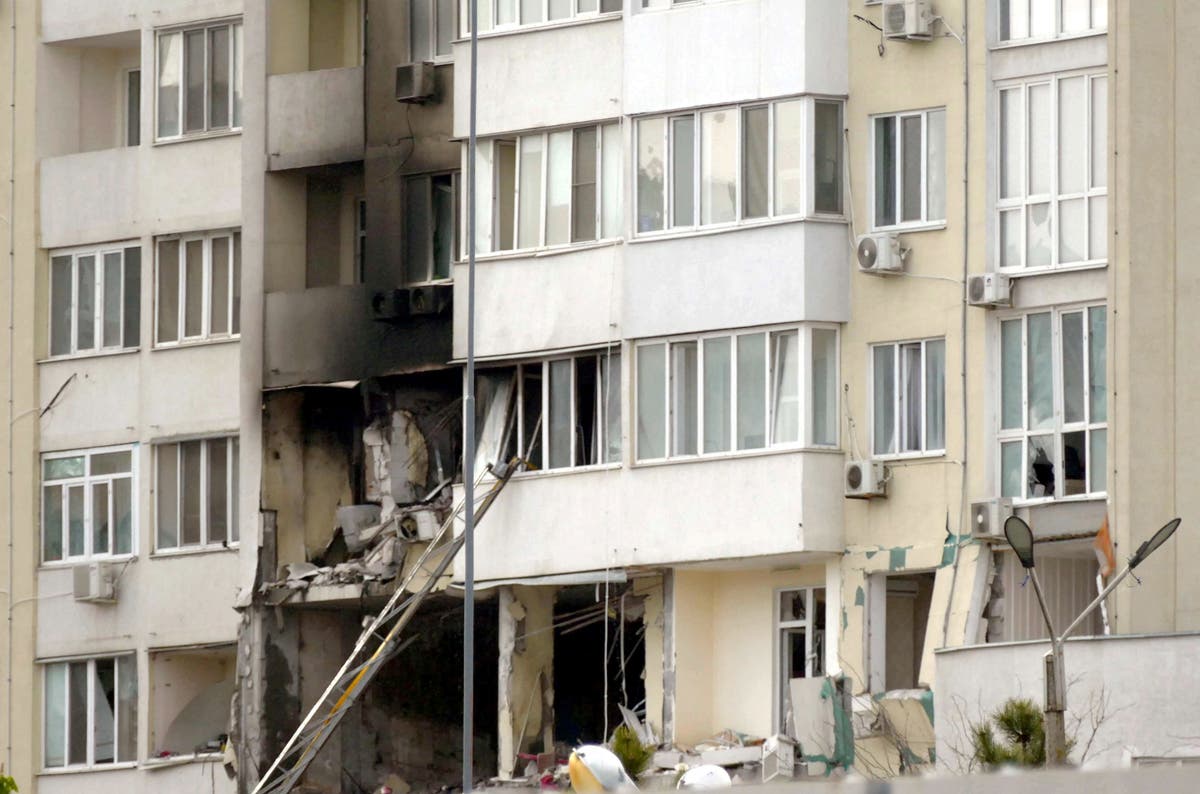 Volodymyr Zelensky is meeting with top US diplomats in Kyiv, a Ukrainian official has said.

It is the highest level visit to Ukraine by an American delegation since the start of Russia’s invasion in February. The adviser, Oleksiy Arestovych, said in an interview on Ukrainian TV late Sunday that the talks are going on “right now.”

Mr Zelensky’s meeting with US secretary of state Antony Blinken and US defence secretary Lloyd Austin came as Ukraine pressed the west for more powerful weapons in its fight against the Russian invasion, which began 60 days ago.

Victor Lobush of Kyiv said Ukraine needs more weapons and financial support, and for Western nations “not to buy even a drop of the Russian oil.”

“Actions, not words, are needed,” he said on Independence Square.

On Saturday eight people, including a three-month-old baby were killed after a Russian missile attack in Odesa.

Police in Northern Ireland are making enquiries following the daubing of pro-Russian graffiti at a Game of Thrones filming location.

The graffiti – ‘Z glory to Russia’ – written in the large words and referring to the symbol Z painted on Russian tanks during the Ukraine invasion, appeared on the road at the Dark Hedges in Co Antrim.

The tree-lined route became world famous when it was featured in the HBO fantasy series and now attracts significant numbers of tourists.

The Police Service of Northern Ireland confirmed they have received a report that graffiti had been daubed on a tunnel at the Dark Hedges in the Bregagh Road area of Armoy.

A spokesperson said: “Enquiries are ongoing.”

The incident comes as a number of Ukrainian refugees fleeing the Russian invasion of their country started to arrive in Northern Ireland.

DUP North Antrim Assembly Candidate Mervyn Storey said the sentiment of the graffiti is completely at odds with the welcome that arriving Ukrainian refugees have received to the area.

“This is a wanton act of vandalism at one of Northern Ireland’s most iconic locations,” he said.

“It is completely at odds with the warm welcome our local community provides to tourists from all over the world who come to see what the Dark Hedges and the North Coast have to offer.”

Mr Storey said he has recently been able to welcome refugees from Ukraine into his church community.

“It is despicable that they should have to encounter this type of behaviour glorifying Russia’s oppressive campaign of terror in their homeland.

“Our support must be with the people of Ukraine,” he said.

“I will be working closely with local authorities and the PSNI to ensure this graffiti is removed immediately and those responsible held to account.”

Boris Johnson branded Russia’s aggression towards Ukraine “nauseating” during a conversation with the UN secretary-general before he travels to Moscow.

The prime minister, in his phone call with Antonio Guterres on Sunday afternoon, “made clear the importance of global solidarity with Ukraine” in the face of “blatant aggression” by the Kremlin, No 10 said.

The United Nations chief has faced criticism from Ukrainian president Volodymyr Zelensky for choosing to visit Russia before he travels to Kyiv.

Mr Guterres is scheduled to travel to Turkey on Monday and then Moscow and Kyiv, but Mr Zelensky said it was a mistake for the Portuguese diplomat to arrange his trip in that order.

“Why? To hand over signals from Russia? What should we look for?” Mr Zelensky said on Saturday.

“There are no corpses scattered on the Kutuzovsky Prospect,” he said, referring to one of Moscow’s main avenues.

Offering a readout of Mr Johnson’s talks with the secretary-general, a Downing Street spokeswoman said: “The prime minister described Putin’s actions in Ukraine as nauseating and blatant aggression, which is having devastating consequences for Ukraine’s people.”

Blinken arrives in Ukraine to meet

US Secretary of State Antony Blinken and defence secretary Lloyd Austin have arrived in Ukraine.

The pair are in Kyiv and were holding talks withVolodymyr Zelenskiy, presidential adviser Oleksiy Arestovych said late on Sunday in a social media video.

Mr Blinken and Mr Austin will discuss the kinds of weapons that Ukraine needs to battle Russia’s renewed aggression in the east and south of the country, Mr Zelensky said at a news conference Saturday.

The visit will mark the highest level United States officials to visit since the Russian invasion began on 24 February.

Russia’s Consulate-General in New York has had to use the reserve of cash at its disposal and has resorted to austerity measures after its account in the Bank of America was blocked in March, said state news agency TASS.

The consulate has since remained fully operational, said the acting Consul-General Vyacheslav Slavkin.

“Before all that happened, we created a certain cash reserve in anticipation of some unpleasant things that might occur. The cash we have enables us, on the condition we take austerity measures, to pay the electricity and utility bills and for car fuel, to a certain extent, although we have restricted the use of motor transport. Also, we can pay salary to our staff,” he said.

Earlier today Russia’s ambassador to the US, Anatoly Antonov, said the Bank of America closed the accounts of Russia’s general consulates in Houston and New York and the embassy was in fact “blockaded by US government structures”.

Ukraine has asked the International Atomic Energy Agency (IAEA) for “a comprehensive list of equipment” it needs to operate nuclear power plants during the war with Russia, Reuters reports.

“We will coordinate the implementation of the assistance that the IAEA and its member states will provide, including by delivering required equipment directly to Ukraine’s nuclear sites,” IAEA Director General Rafael Grossi said.

“The needs are great and I’m very grateful for the considerable support that our Member States have already indicated they will make available.”

Governor Dmytro Lunin said that the number of casualties and the damages caused by the evening strike were being verified, reported The Kyiv Independent.

According to Slidstvo.info, the Russian Orthodox Church has helped with the deportation and resettlement of Ukrainians.

Since the invasion of Ukraine, the Russian Ministry of Emergency Situations has been sending reports on the occupied territories and deported Ukrainians to the church.

The Ministry of Emergencies informs churchmen daily about changes in the occupied territories and the number of Ukrainians forcibly deported – routes and time of delivery of people from Ukraine to Russia.

Our Defence and Diplomatic Editor Kim Sengupta reports on how Ukraine’s continued resistance against Russia will shape modern history forever.

According to the latest update from Ukraine’s Armed Forces, Russian troops intensified their offensive in Kharkiv Oblast, trying to advance, but suffered losses and were forced to retreat to occupied territories, The Kyiv Independent reported.