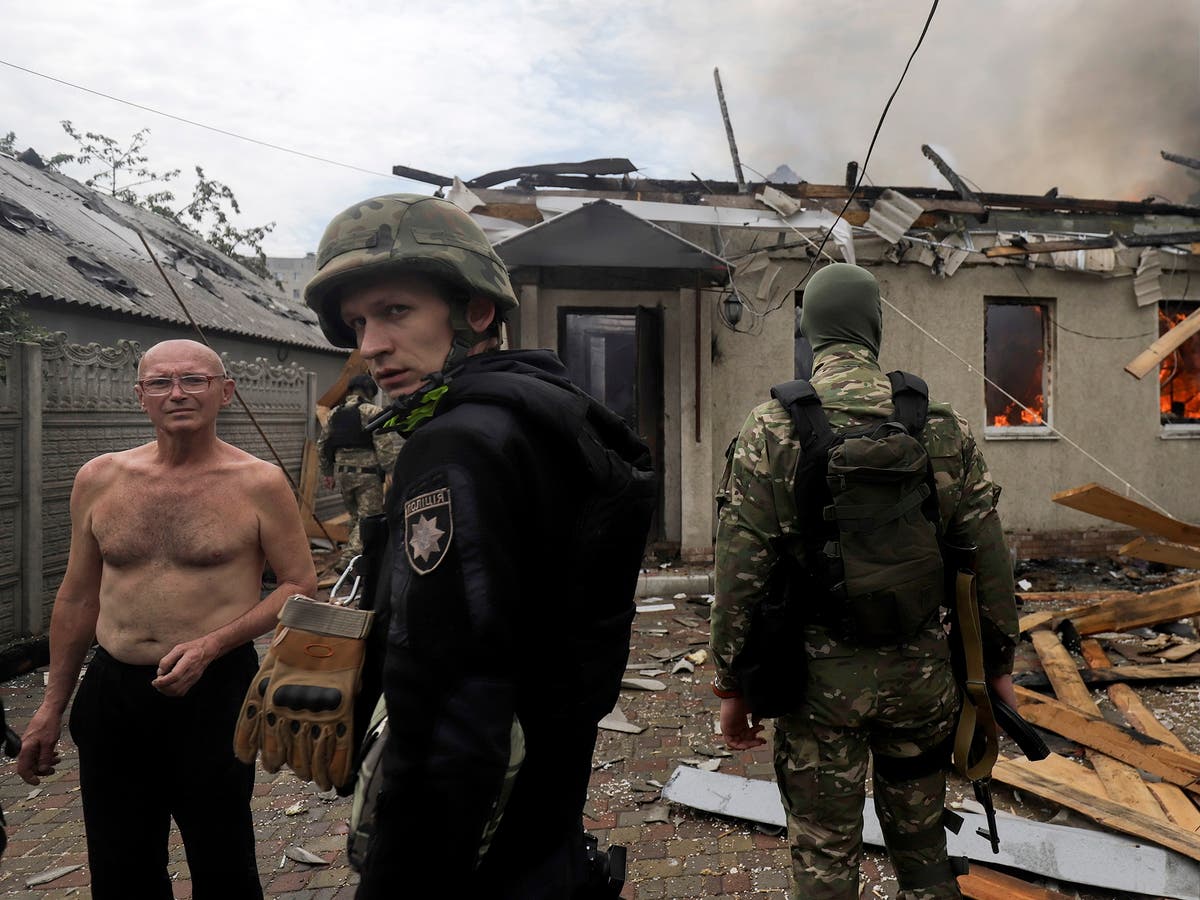 Russia’s air activity remains high over contested areas in the eastern Donbas region, but has been largely restricted to “deep strikes” to disrupt the movement of Ukraine’s reinforcements and supplies, new intelligence suggests.

According to the latest update from the UK’s Ministry of Defence (MoD), Russia’s failures to suppress or destroy Ukraine’s strategic air defence systems in the early days of its assault has “limited its ability to provide tactical air support to ground manoeuvre elements”, which it adds contributed to the failure to advance on Kyiv.

Posting on Twitter this morning, UK defence officials said the contested ground in the Donbas continues to face bombardment from Russian aircraft conducting strikes “using both guided and unguided munitions.”

The post adds: “Russian air activity has been largely restricted to deep strikes using air and surface launched cruise missiles to disrupt the movement of Ukrainian reinforcements and supplies.

“These strikes alone however have failed to have a meaningful impact on the conflict and Russian stocks of precision guided missiles are likely to have been significantly depleted as a result.”

Another ship sent to take metal to Russia ‘arrives in Mariupol’

A ship sent to load metal and ship it to Russia has entered the Ukrainian port of Mariupol, TASS news agency reported on Saturday, the second vessel to arrive in the southeastern city since Russia completed its capture last month.

“The ship has arrived and is in the port,” TASS cited a port authority representative as saying, adding that it was to be loaded with metal.

Earlier this week, a ship left Mariupol for Russia with a cargo of metal. Ukraine said the shipment from the port, whose capture gave Moscow an overland bridge linking mainland Russia and pro-Russian separatist territory to annexed Crimea, amounted to looting.

Russia seized full control of Mariupol earlier this month when more than 2,400 Ukrainian fighters were taken into custody after being ordered to stand down at the besieged Azovstal steelworks. Russia said in late May that the port had been de-mined and was open again to commercial vessels.

Russia’s air activity remains high over contested areas in the eastern Donbas region, but has been largely restricted to “deep strikes” to disrupt the movement of Ukraine’s reinforcements and supplies, new intelligence suggests.

According to the latest update from the UK’s Ministry of Defence (MoD), Russia’s failures to suppress or destroy Ukraine’s strategic air defence systems in the early days of its assault has “limited its ability to provide tactical air support to ground manoeuvre elements”, which it adds contributed to the failure to advance on Kyiv.

“Russia’s inability to suppress or destroy Ukrainian strategic air defence systems in the opening days of the conflict limited its ability to provide tactical air support to ground manoeuvre elements, contributing to the failure to advance on Kyiv.

The post continues: “These strikes alone however have failed to have a meaningful impact on the conflict and Russian stocks of precision guided missiles are likely to have been significantly depleted as a result.

“With its operational focus switching to the Donbas, Russia has been able to increase its employment of tactical air to support its creeping advance, combining airstrikes and massed artillery fires to bring its overwhelming firepower to bear.

“The combined use of air and artillery strikes has been a key factor in Russia’s recent tactical successes in the region.

“The increased use of unguided munitions has led to the widespread destruction of built-up areas in the Donbas and has almost certainly caused substantial collateral damage and civilian casualties.”

Ukrainian intelligence services are in communication with the captured Azovstal defenders and Kyiv is doing everything it can to ensure their release, interior minister Denys Monastyrskiy has said.

Uncertainty has surrounded the fate of hundreds of fighters taken into Russian custody in mid-May after being ordered to stand down.

“It is through them (intelligence services) that we are learning about the conditions of the detention, nutrition and the possibility of their release,” Monastyrskiy said.

“We all know that they will all be here, in Kyiv, and we are doing everything possible to do so.”

Japan’s prime minister is considering attending a summit of Nato leaders later this month to propel coordination with the West over Russia’s military operation in Ukraine, reports claim.

Fumio Kishida will make a final decision later, taking into account the political situation before the upper house elections, the government sources were quoted as telling Kyodo News.

The military alliance has invited Japan to the summit, along with Australia, New Zealand and South Korea as its partners in the Asia-Pacific region.

Russia threatens ‘most stringent measures’ against US media

Russia’s foreign ministry on Friday said it was summoning the heads of American media outlets to notify them of ‘most stringent measures’ in response to US restrictions against Russian media.

“If the work of the Russian media – operators and journalists – is not normalised in the United States, the most stringent measures will inevitably follow,” ministry spokeswoman Maria Zakharova warned on Friday.

“To this end, on Monday, 6 June, the heads of the Moscow offices of all American media will be invited to the press centre of the Russian Foreign Ministry to explain to them the consequences of their government’s hostile line in the media sphere,” she said, adding, “We look forward to it.”

Last month, the US announced sanctions against some state-owned Russian TV stations, which serve as President Vladimir Putin’s “disinformation machine” to “mask the truth” of his “barbaric invasion behind lies and deceit.”

In a statement to Reuters about the Monday meeting, a spokesperson for the US State Department said: “The Kremlin is engaged in a full assault on media freedom, access to information, and the truth,”

Switzerland’s War Materiel Act mandates that export requests cannot be approved if the recipient country is in an international armed conflict.

United Nations Secretary-General Antonio Guterres once again called for an immediate end to the war in Ukraine, or 100 days since Russia’s invasion began.

Mr Guterres, in a tweet on Friday, said the war “is inflaming a three-dimensional global crisis – food, energy and finance” which is “pummelling the most vulnerable people, countries and economies”.

“The sooner this war ends, the better,” he wrote, adding, “For the sake of Ukraine, Russia, and the world.”

Ukrainian forces have reclaimed 20 per cent of Sievierodonetsk from Russia, officials say

Making an announcement on national television, Mr Haidai said: “Whereas before the situation was difficult, the percentage (held by Russia) was somewhere around 70 per cent , now we have already pushed them back by approximately 20 per cent.”

Further, he added that Russian military were attacking and advancing on Ukrainian positions for hours – “moving forward, step-by-step” – until they were driven back.

On Thursday, Ukrainian president Volodymyr Zelenskyi announced that the country’s forces had made “some progress” in the region, without providing any additional details.

Russian forces have been trying to capture Sievierodonetsk and Lysychansk, the only two cities in eastern Ukraine’s Luhansk province not controlled by the Kremlin. These provinces constitute the Donbas, or Ukraine’s eastern industrial region that Russia has been gunning to control.

Joe Biden on Friday said he thinks a “negotiated settlement” will be necessary to end Russia’s war in Ukraine.

Asked whether Ukraine should give up some of its territory to Russia in order to end the war and bring peace to the region, the US president said his policy continues to be that the United States will not make any decisions about Ukraine without Ukraine.

He said “it’s their territory” and “I’m not going to tell them what they should and shouldn’t do.”

But he also said “it appears to me that at some point along the line there’s going to have to be a negotiated settlement here.” He said he does not know what such an agreement would look like but that the US will continue to help Ukrainians defend themselves.

Mr Biden commented from Delaware on Friday, the 100th day of Russia’s invasion.

Switzerland’s government on Friday said it would not honour a request by Denmark to send nearly two-dozen Swiss-made armored personnel carriers to Ukraine, citing Swiss “neutrality law” that bans the export of war material to a country at war.

The executive Federal Council confirmed the decision, reported in Swiss media this week, on Friday just as the Swiss government also announced that it would allow the transfer of some military equipment to Germany and Britain as they replenish supplies that the two countries have sent to Ukraine.

The announcement testified to the fine line Swiss authorities are treading to hold to Switzerland’s legal requirement to remain neutral as laid out in the War Materiel Act, which bars the transfer of Swiss-made weapons systems, ammunition and other war material to a country involved in an international conflict.

Denmark had requested that Switzerland transfer 22 Swiss-made Piranha III wheeled armored personnel carriers, which Denmark had procured and stored in Germany, to Ukraine.