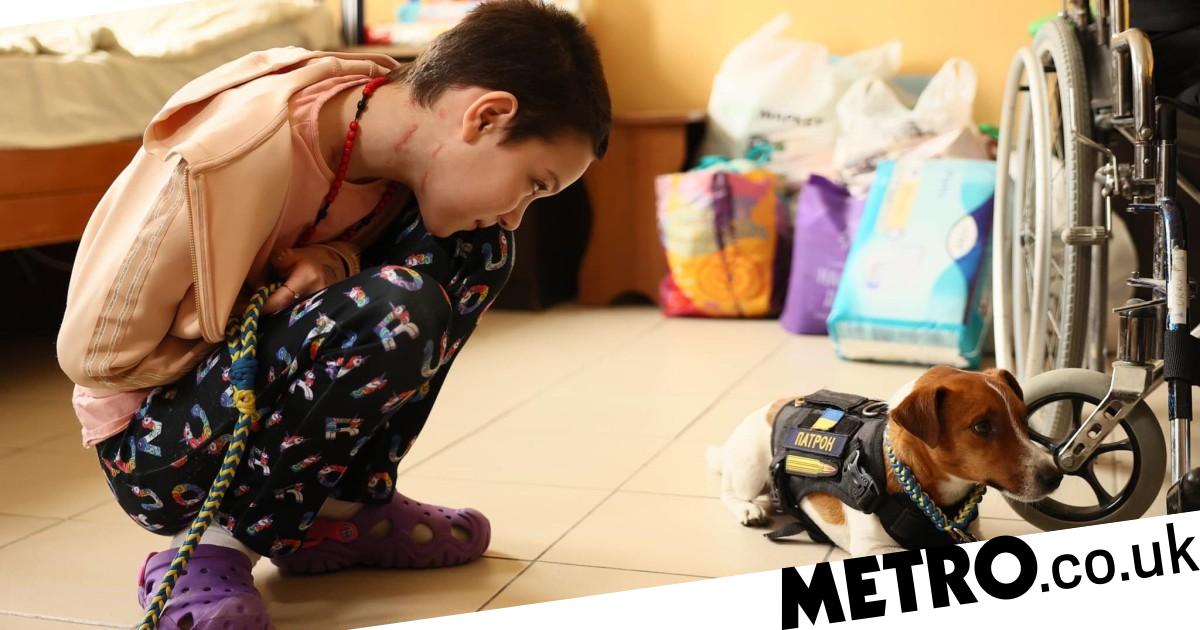 Young victims of the Ukraine war have had their spirits lifted by a surprise visit from the country’s most famous dog, a mine-sniffing Jack Russell named Patron.

Patron was hailed as a national hero after helping minesweepers detect more than 200 Russian landmines and unexploded bombs, and has appeared as a symbol of the Ukrainian resistance on billboards and official war broadcasts.

He was bought to win pedigree dog shows but his usefulness in the field instead landed him in Ukraine’s presidential palace when Volodymyr Zelensky handed him a medal for national service last month.

On Thursday the terrier travelled more than 400 miles from his hometown of Chernihiv to tour St Nicholas Children’s Hospital in Lviv.

In a statement, officials overseeing the hospital said: ‘Smiles from the little guest shone on the faces of our children again!

‘He told the children about explosive devices and went over safety rules with them.

‘Such visits are important for improving health and mood, so we thank the extraordinary [Patron] for such a surprise.’

The paediatric facility has become home to children from all over Ukraine who have suffered horrific injuries in months of Russian shelling.

They include Jana, who lost both legs in a missile strike on a train station in Kramatorsk in April where some 4,000 civilians were reportedly sheltering.

Her mother Natalia, who also a lost a leg in the attack, is staying with her at the hospital, along with her 11-year-old brother who helps care for them.

Patron also met Lviv’s popular ‘Cat Mayor’, Levchyk the tabby, who lives in the human mayor’s and has also risen to internet fame after steadfastly carrying on his duties in a time of conflict.

The pair were said to have got off to a frosty start but eventually bonded over a ‘common language’ of pet treats handed to them by staff.

Patron’s hospital visit was organised by Ukraine’s State Emergency Service, the government body responsible for mine clearance and various other civilian protection duties.

Authorities in Lviv are now caring for nearly 800 children who have been forced to flee their homes during the invasion, of whom 467 were orphans.

Patron had arrived in the city on Wednesday for International Children’s Day, also paying a visit to FC Dynamo Lviv’s football stadium where many of the displaced children are staying.

Patron’s owner, Myhailo Iliev, a major in the Civil Protection Service, reportedly realised his potential when he noticed the dog did not cower at the sound of explosions.

He recommended him for active service and was told Patron’s 4kg weight made him ideal to hunt for landmines, which usually require a 5kg force to set them off.

Mr Iliev previously said Patron gets ‘a lot more tired now because of all the attention’ but enjoys boosting people’s morale.