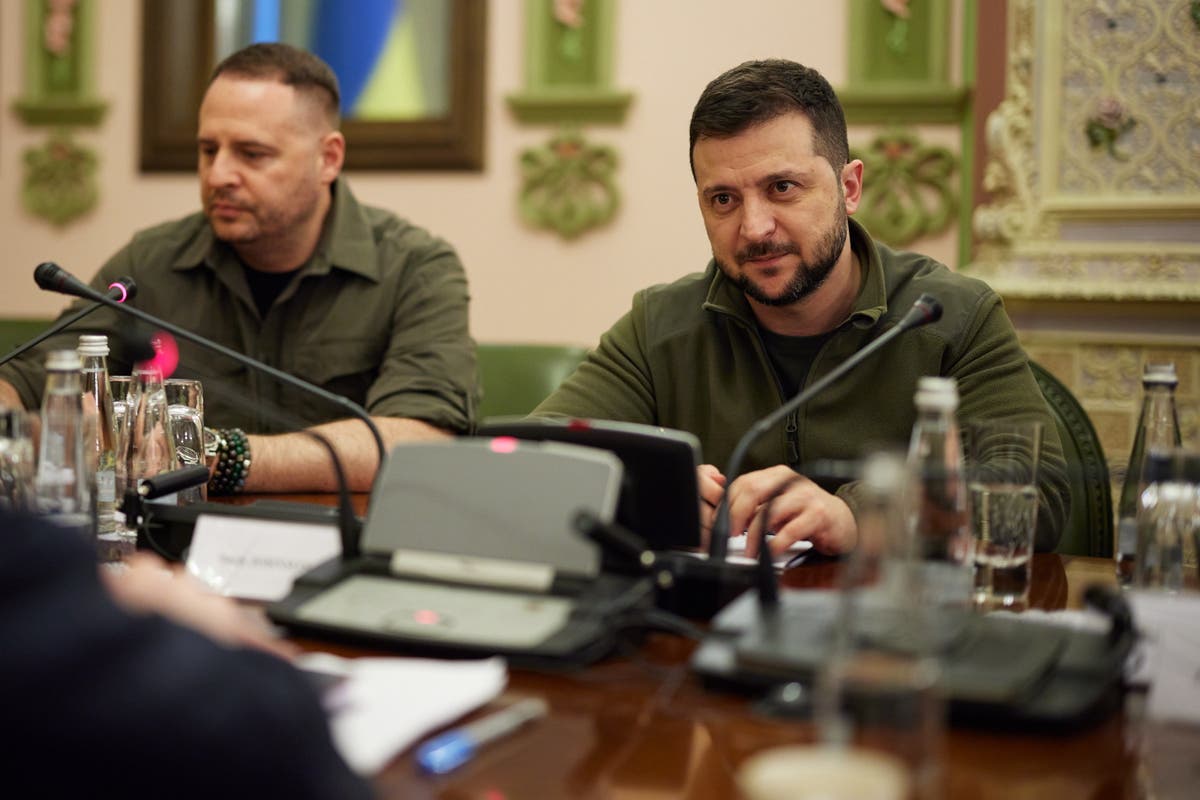 Ukraine’s president Volodymyr Zelensky has derided his Russian counterpart Vladimir Putin’s claim that the invasion is going to plan after his forces were forced to withdraw from the north of the country.

Mr Putin has vowed that Russia’s bloody offensive in Ukraine will continue and insisted the campaign was unfolding as expected, despite suffering heavy losses in the face of stiff opposition.

The Kremlin leader claimed on Tuesday that his invasion was launched to “ensure Russia’s own security” and suggested that he “had no other choice”, saying it would “continue until its full completion and the fulfilment of the tasks that have been set”.

In an overnight address from Kyiv, Mr Zelensky responded to those remarks, saying: “In Russia it was once again said that their so-called ‘special operation’ is supposedly going according to plan. But, to be honest, no one in the world understands how such a plan could even come about.

“How could a plan that provides for the death of tens of thousands of their own soldiers in a little more than a month of war come about? Who could approve such a plan?”

Russian troops are pivoting to the eastern Donbas region after failing to take the capital, Kyiv, which experts believe was Mr Putin’s original goal.

Ukraine claims the Russian death toll is as high as 20,000, while western allies say it is likely nearer 15,000. Russia said at the end of March that fewer than 1,500 of its soldiers had died.

Despite the stalled ground advance after nearly seven weeks of fighting, Mr Zelensky said observers of the war should not dismiss Russian troops as ineffective, or diminish the Ukrainian response to them.

“We must understand that not all Russian tanks are stuck in fields, not all enemy soldiers simply flee the battlefield and not all of them are conscripts who do not know how to hold weapons properly,” he said.

“This does not mean that we should be afraid of them. This means that we must not diminish the accomplishments of our fighters, our army.”

Ukraine has said it is investigating a claim that a poisonous substance had been dropped on its troops. It was not clear what the possible substance was, but western officials have warned that the use of chemical weapons would be a serious escalation.

The alleged incident took place in the strategic port city of Mariupol in the south of the country, which has been besieged for weeks.

Commenting on the unverified allegation, Mr Zelensky said: “We take with great attention yesterday’s reports on the use of a projectile with a poisonous substance in Mariupol against the defenders of the city.

“It is not yet possible to draw 100 per cent conclusions about what kind of substance it was, obviously it is impossible to conduct a full investigation and full analysis in the besieged city.

“However, given the repeated threats of the Russian propogandists to use chemical weapons against the defenders of Mariupol and the repeated use by the Russian army of phosphorus munitions in Ukraine, for example, the world must respond now.

“Respond preventatively. Because after the use of weapons of mass destruction, any response will not change anything and it will only look like a humiliation for the democratic world.”