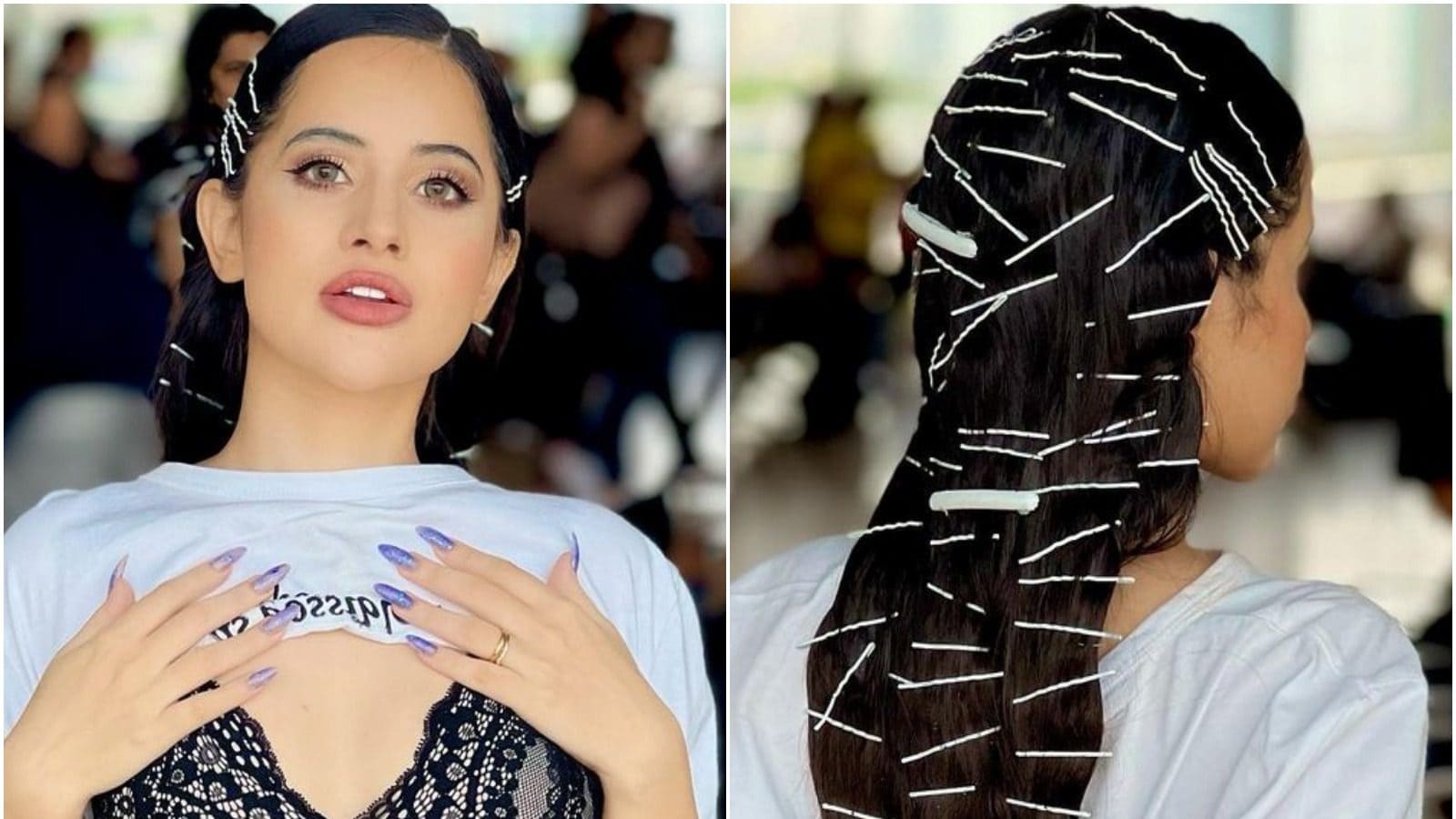 Internet sensation Urfi Javed is known for her weird sense of style. The Bigg Boss OTT fame never fails to leave netizens stunned with her eccentric and bizarre fashion choices. Each time the actress is spotted by the paparazzi, her outfit becomes the talk of the town. On Wednesday, Urfi was spotted at the airport and she gave the netizens another reason to troll her.

In a video shared by popular Bollywood paparazzo Viral Bhayani, Urfi Javed is seen dressed up in a revealing white cut-out top, and a black bralette with classic denim pants. The tv actress flaunted her toned physique at the airport. With her dewy makeup on Urfi looked glamorous. But what caught our attention is Urfi’s hairstyle, the tv actress added a number of clips on her hair in sync with her white top.

Urfi too shared pictures from the airport as she struck pose for the lens. Taking to the captions, the tv star revealed that she had painted her hairpins. She wrote, “Swipe right to see the hairstyle !! 😅😅Painted the pins myself !” One of the comments read, “With all the pins in her hair, I wonder how she’ll cross the security gate in airport.

Soon after the video was shared online, her video impressed fans. The comment section of Urfi Javed’s video is flooded with fire and heart emojis. While one of the netizens said that the hairstyle deserves claps, another social media user tagged her as “gorgeous.”

As usual, some social media users trolled the actress for her hairstyle and clothing. While one wrote, “She has ACTUALLY cut off her tshirt for this😂😂😂😂😂😂😂😂 omg.” Another wrote,”shirt neeche karna bhull gayi didi🙌🙌.”

Earlier this year during an interview, Urfi Javed admitted having self-doubts and revealed that there was a time when she used to think if her fashion choices are right or not. “Pehle pehle mujhe lagta tha. I used to think about it the whole night. Mein kuch zyada toh nahi kar rahi hu. Mein kuch galat toh nahi kar rahi hu. Am I really a slut? But then I realized ke ‘b***h no. I’m not the problem, society is the problem,” Urfi had informed India.com.

On the work front, Urfi Javed was recently seen in a music video along with her rumoured singer boyfriend Kunwarr. Apart from this, Urfi participated in Bigg Boss OTT last year but was the first contestant to get eliminated from the show. She has also worked in several television shows including Bade Bhaiyya Ki Dulhania, Meri Durga, Bepannaah and Puncch Beat Season 2. She also starred in Yeh Rishta Kya Kehlata Hai for some time and later played Tanisha Chakraborty in Kasautii Zindagii Kay 2.

Taylor Swift’s reputation has changed – from basic to beloved