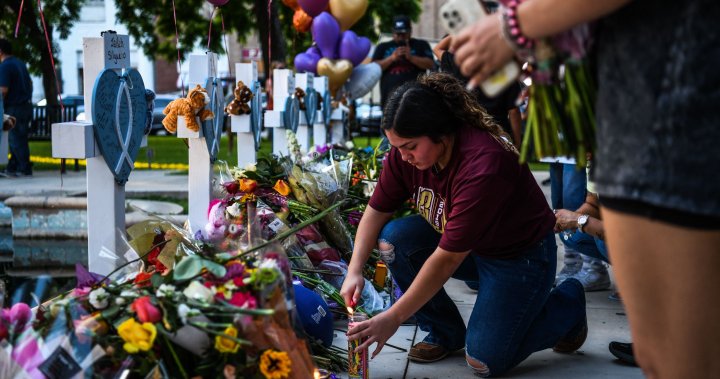 ** NOTE: This article contains disturbing descriptions of a fatal event. Please read at your own discretion. **

An 11-year-old student at Robb Elementary School in Uvalde, Texas says she covered herself with a classmate’s blood and played dead to avoid being shot on Tuesday.

Miah Cerrillo told CNN Friday that she put her hands in the blood of a classmate after the shooter left the classroom and smeared it on herself to appear as though she was already dead, in case the killer came back to the room.

She survived, but her aunt, Blanca Rivera, told NBC in Houston that she saw her teacher and friends massacred.

Cerrillo told CNN that her class was watching a movie Tuesday afternoon when her teachers got an email about a shooter in the school.

One teacher “went to the door and he was right there — they made eye contact,” CNN reporter Nora Neus, who interviewed Cerrillo, told the outlet.

“Miah says it just happened all so fast. He backed the teacher into the classroom. He made eye contact with the teacher, again, looked her right in the eye and said ‘goodnight’ and then shot her and killed her.”

He then turned his weapon on the classroom of fourth graders, hitting the other teacher and many of Cerrillo’s friends.

After he left the classroom, Cerrillo said she heard him enter an adjoining classroom and heard more gunfire and screams.

3:32
Texas school shooting: Authorities say it was ‘wrong decision’ not to breach classroom

Texas school shooting: Authorities say it was ‘wrong decision’ not to breach classroom

At this point, Cerrillo and a friend grabbed their dead teacher’s phone and used it to call 911. She told CNN she thought it was taking police a long time to reach the campus, but said she later learned that police waited outside the school while the gunman went on a killing spree inside.

As she recounted the events to CNN, she broke down crying, saying she didn’t understand why the police officers didn’t come inside to help sooner.

The Associated Press reports that frustrated onlookers urged police officers to charge into the elementary school. Parents told the outlet that they considered charging into the school after seeing officers congregating outside but not making any moves to stop the killings.

Department of Public Safety Director Steve McCraw told reporters that 40 minutes to an hour elapsed from when the shooter opened fire on the school to when the tactical team shot him, though a department spokesman said later that they could not give a solid estimate of how long the gunman was in the school or when he was killed.

“The bottom line is law enforcement was there,” McCraw said. “They did engage immediately. They did contain (the shooter) in the classroom.”

Onlookers urged Texas police to rush into school during shooting: ‘Go in there!’

Meanwhile, a law enforcement official familiar with the investigation said the Border Patrol agents had trouble breaching the classroom door and had to get a staff member to open the room with a key. The official spoke on the condition of anonymity because he was not authorized to speak publicly about the ongoing investigation.

Soon after a shooting, it’s hard to get a clear understanding of what exactly happened, said Michael Dorn, executive director of Safe Havens International, which works to make schools safer.

3:37
Questions emerge about police response to mass shooting in Texas

Questions emerge about police response to mass shooting in Texas

“The information we have a couple of weeks after an event is usually quite different than what we get in the first day or two. And even that is usually quite inaccurate,” Dorn said. For catastrophic events, “you’re usually eight to 12 months out before you really have a decent picture.”

Meanwhile, Cerrillo’s family said she was treated at hospital for bullet fragments in her back, neck and shoulders and is now at home recovering.

However, Rivera told NBC her niece is struggling to cope emotionally with the horrors she witnessed.

“At this point, we just have to pray and ask God to help us move forward through this situation … traumatizing as it is,” said Rivera.

– With files from the Associated Press and Reuters

The Best Gifts For Weekend Travelers