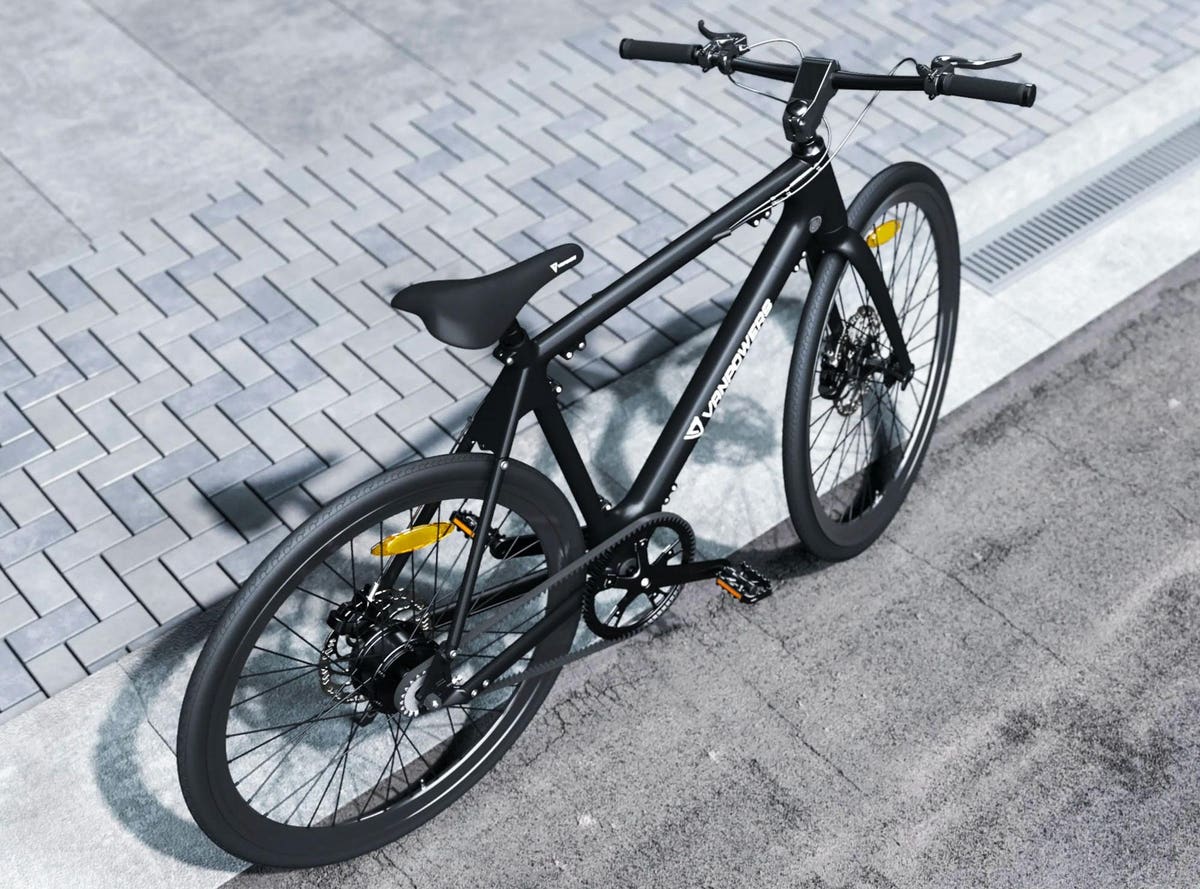 I typically don’t go in for long assembly projects when it comes to ebikes as I’ve built many of them over the years and I like to get them together quickly and get riding. But the City Vantrue by Vanpowers came with a twist that tickled my curiosity, and they sent one along several weeks ago. Instead of the usual just-add-bars-front-wheel-and-pedals routine that usually takes 15 to 20 minutes on most bikes, the City Vantrue instead arrived in a small box (for a bicycle) tightly packed with parts. Make no mistake, this is a full size urban-style single-speed ebike with 26-inch wheels and a regular duo-triangle frame, aero fork and more; it’s not a foldy or small-wheel compact bike.

The interesting assembly process is based on a Chinese woodworking method called “mortise and tenon.” The bicycle arrives in a box essentially disassembled, mainly in terms of the frame. The aluminum frame sections go together by sliding a spar (the mortise) onto a joint (the tenons), and the fit is very precise. Each connection is secured with steel bolts. More technical aspects like the wiring, wheels, and brake lines are already built, but builders will have to install the brake handles and the hand grips.

This unique semi-DIY approach has some sound physical and financial reasoning behind it. Most aluminum-framed ebikes are welded together, and most companies don’t take the time (or expense) to smooth out the welds, they just paint over them. Welds between aluminum pieces are usually the weak link in the chain as it were, while With Vanpowers’ unique assembly process, you trade welds for a series of bolts where the frame comes together, but overall, its looks very clean, even unique. This weld-less LEGO-like or IKEA assembly method just feels very strong, even while you’re assembling it. While assembling the bike, I was also better able to adjust small comfort elements like brake handle location and seat position fore and aft.

Also, since the bike is assembled by the rider from “parts,” buyers can get very creative with mix-and-matching colors, giving them a very unique bike without having to paint or strip it. My review bike was solid black (which I like, above), and the shiny bolts formed a sort of visual highlight on the bike. The Infinite Silver color scheme is also very attractive. As noted, the bike arrived in a box roughly half the size of a regular bike box. This cuts down on materials costs for the box, shipping cost and waste.

I didn’t rush to built the City Vantrue, and it took the better part of 90 minutes to assemble, and it was a satisfying endeavor. Once I had all the parts unpacked and laid out (above), I used the good-quality tools, mainly hex keys/Allen wrenches, that were included and the instructions from Vanpowers to piece the bike together while listening to some music and enjoying a frosty beverage. All of the parts fit very snug with no slop or loose tolerances, and each one is labeled with a number for clarity (the labels peel off cleanly). Vanpowers dropboxed me a 15-minute assembly video that was a bit too fast-paced for my liking (obviously you pause it as you go), and I felt it glossed over some of the more technical parts of the build, particularly the critical Gates carbon belt installation and tensioning, but thankfully the written manual is very comprehensive and avoids any Chinese-to-English translation problems I often see with other manuals. The manual also includes specs on torque values for the many bolts involved in building the City Vantrue that were not in the video, which are important to know so the bike is built to spec as it were. A torque wrench is not included with the tools from Vanpowers, but I recommend getting one if you decide to undertake building this bike (or any bike).

The U.S. version of the City Vantrue is a Class 1 ebike with pedal assist only from the 350-Watt rear hub motor, which offers five assist levels and a walking speed assist as well. A small and very cleanly integrated color LCD built into the top of the steering stem provides quick info on speed, assist level and battery level. Three small buttons on the left bar toggle power, options and displays. Charging is simple with a plug-in charger that had the battery at 100 percent in about two hours.

The City Vantrue is a very lightweight ebike, coming in at 35 pounds on my bike scale, and it’s very difficult to tell it’s an ebike at all. The 36-Volt 7-Amp hour lithium-ion battery is in the lower frame spar, which isn’t notably larger than the other frame tubes. The illusion is helped by a rear hub that clicks on coasting like a “normal” bicycle. Most people who I showed it to thought I was joking when I said it was an ebike – until I let them ride it.

And with any ebike, the ride is the thing. I felt boost at the pedals until just over 20 mph, which is plenty fast on a single-speed street machine wearing skinny 700 x 28cm Maxxis tires on black DT Swiss aero rims. Hydraulic disc brakes front and rear do an excellent job of scrubbing off speed and are largely silent, as is the tiny but powerful motor when it’s working while you pedal. Ride quality is excellent; this is a fun and precise-feeling bicycle that’s a joy to ride, even long distance. The frame size I received fit this large 6-foot-1 rider just right and the seat was comfortable. Max assist is needed on steep hills along with some standing on the pedals due to the single gear, but I had no trouble summiting my 700-foot elevation gain butte test, and the City Vantrue sliced through the downhill portion at well over 30mph while feeling planted and

The City Vantrue also came with a high-quality helical bike bell, but no lights whatsoever. I simply added an LED bar light and LED tail light blinker from my personal bike light collection, but it would be nice if they were included with the bike, especially a black bicycle that will be ridden at night. Its a minor thing, but many bikes now come with lights of some sort and if I could mandate that every bike came with lights, I would. I see (or don’t see) too many cyclists riding at night depending on reflectors instead of actual lights. LED lights kits are cheap and effective and are offered as options by Vanpowers, just put a set in the box, please. The City Vantrue did include a set of reflectors. Racks, fenders, extra batteries and more are also available among a very wide selection of accessories.

I’ve been reviewing a fair number of urban-style single-speed ebikes lately as they are growing in popularity, and for good reason: If you don’t need off-road capability, these sleek bikes are excellent at slicing through city traffic and feel far more sporty than the fat-tire or middle-weight commuter bikes. Overall, I was very impressed with the $1,699 City Vantrue ebike. It appeals to my minimalist biking sensibilities, and I love to build things that go together well. It’s a fast, stylish, sweet-riding ebike that is fun to ride and after assembly, I had no issues with the build, but I also checked it now again for tightness (it was fine). As noted, I’d like to see Vanpowers include a torque wrench with the tools (they briefly show one being used in their promo video, below), along with some basic lights. Otherwise, I recommend the Vanpowers City Vanture.

And good for Vanpowers – more bike models appear to be on the way (made with more typical construction) including a fat-tire mountain ebike that looks like it will be a lot of fun. I hope to try it out when it becomes available.

Cameron Munster will wear No.7 for Kangaroos, not Nathan Cleary or Daly Cherry-Evans