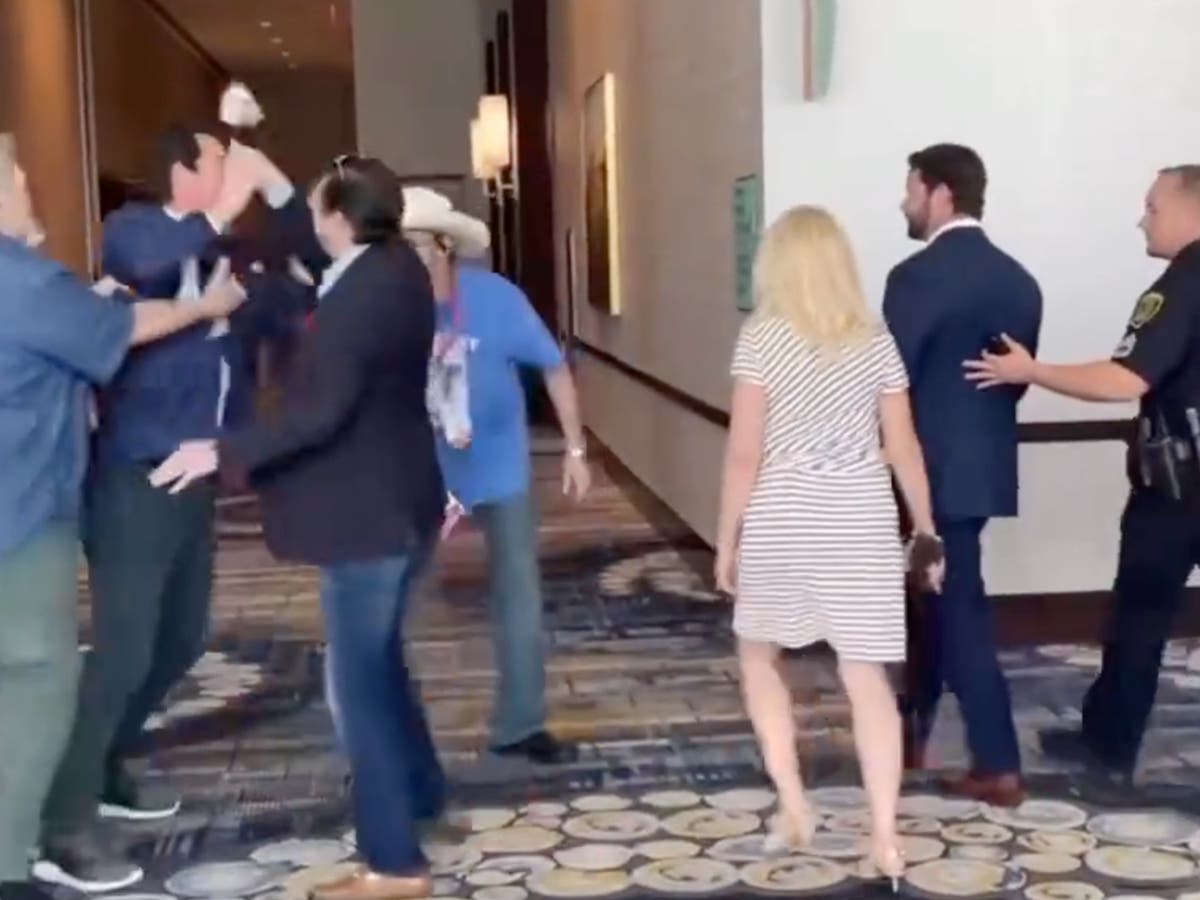 Texas Representative Dan Crenshaw and his staff were confronted and harassed by right-wing social media activist Alex Stein at the Republican Party of Texas convention on Saturday.

Mr Stein and others, who witnesses described to Mediaite as Proud Boys, began shouting “eyepatch McCain” at the Republican lawmaker, whom they also called a “globalist Rino”.

The insult was originally coined by Tucker Carlson on his Fox News show in a discussion with Tulsi Gabbard about Russia.

Mediaite further reports Mr Stein and the others were escorted from the building and some arrests were made.

“They got physical with multiple people, including hitting them with cameras,” a witness at the scene told the outlet. “His campaign manager was assaulted by being pushed aggressively into a pillar.”

Mr Stein shared the video on his Twitter feed.

In photos provided to Mediaite, a group reported as those escorted from the building appear to be wearing Proud Boys hats.

A second clip emerged on Twitter posted by another person who also shouted at Rep Crenshaw about his connection to the World Economic Forum.

That video ends with a man in a “Make America Great Again” hat shouting that the Texas lawmaker is a “traitor” and “He needs to be hung for treason!”

Mr Crenshaw, a former US Navy SEAL, lost an eye while fighting in Afghanistan. He responded to the harassment on Twitter, tweeting: “This is what happens when angry little boys like @alexstein99 don’t grow up and can’t get girlfriends… 🤷‍♂️.”

CNN anchor Jake Tapper was also disgusted by the attempt to turn a “Navy SEAL’s war wound into some lame attempt at derision”.

He posted an excerpt of Mr Crenshaw’a autobiography describing the incident, adding: “Just what in the hell do these far-right psychos think they’re mocking?”

Rep Crenshaw earned the scorn of Carlson in mid-May after he criticised Republicans who do not support arming Ukraine by sending $40bn in aid saying they are “pro-Russia”.

“Why is Congress so focused on Ukraine but you can’t find baby formula?” Carlson asked referring to the domestic shortage. “According to congressman Dan Crenshaw of Texas, asking questions like that, or really any questions at all, thinking you are a citizen, makes you ‘pro-Russia.’”

In a clip aired by Carlson, Rep Crenshaw said that $40bn spent in the US would not buy anyone baby formula as the problem is “not a money issue.”

As Carlson’s guest, Hawaii Democrat lawmaker Ms Gabbard said that neither party should rush to arm Ukraine or expand Nato.

It was then Carlson coined the phrase: “You know, the more I think about it, it takes a lot of gall for eyepatch McCain to attack moms who are worried about baby formula as pro-Russia.”

Meghan McCain, daughter of late Senator John McCain to whom Carlson was referring, called the segment “just trash” and said she didn’t think Rep Crenshaw would mind the comparison to her father.

Kanye West all smiles reuniting with ex Irina Shayk at…