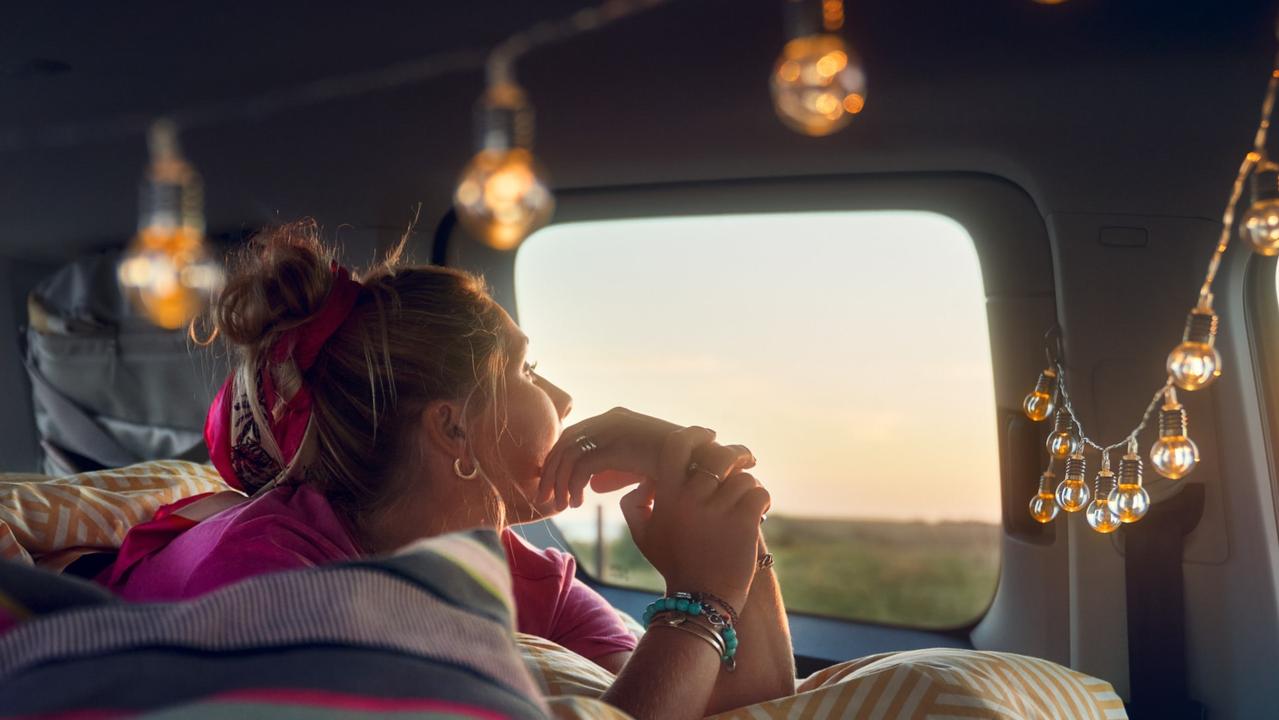 Sleeping in your car is rarely a comfortable proposition.

Seats designed for driving don’t work well for much more than a short nap and the average set of wheels offers little in the way of privacy or amenities.

That’s why Volkswagen’s Caddy California has a loyal following.

Built for folks who want to take their bed on the road, the Caddy California is a compact, car-like alternative to bulky caravans and camper vans.

Based on the VW Caddy van – a model with close ties to Volkswagen’s Golf – the California is much nimbler than caravan combinations.

Rear sliding doors open to reveal a back seat that folds flat in a similar fashion to many popular wagons. But Caddy’s party piece is a flip-over double bed and mattress that unfolds forward from the parcel shelf.

The arrangement locks into place on each side of the car, providing a sturdy and flat (if not exactly decadent) space to sleep.

Like a fold-down bed mounted to the wall of a cramped apartment, this solution makes the most of a fairly small space.

Clever covers for the windows offer a degree of privacy, though there is no bathroom or sink arrangement. Local red tape prevents VW from selling the Caddy with a gas cooktop found overseas, but third party companies can sort you out. There’s space (and a power outlet) in the boot for a fridge, you can remove the rear seats to free up storage room and aftermarket providers can furnish you with impressive tents that extend the Caddy’s living space.

Customers used to VW’s passenger cars will find harder cabin plastics and a shorter features list than an average Golf or Tiguan.

Power comes from a 2.0-litre turbo diesel motor sending 90kW and 320Nm to the front wheels through a seven-speed dual-clutch automatic. While Volkswagen’s passenger cars are largely divorced from diesel, the fuel type remains popular with VW’s commercial arm. Impressive 4.9L/100km economy works in the Caddy’s favour, as does a theoretical cruising range of more than 1000 kilometres between fuel stops.

Compact for a campervan, the Caddy’s dimensions limit its utility as a mobile home, but make it much easier to live with on the road. Accurate steering and powerful brakes work in its favour, the little van feeling more like a fleet-footed hatchback than a lumbering truck on the road.

That said, the Caddy California lacks the refinement of VW’s Golf – a benchmark in the hatchback class. The practical, tall-roofed cabin translates to more noise than you might expect at highway speeds and the combination of a slightly sluggish diesel engine with an occasionally hesitant dual-clutch automatic won’t win universal praise.

Firmer-than-expected suspension is occasionally bouncy at low speed, but as with most commercial vehicles, we suspect it would settle down with passengers or cargo in the back.

Even if it isn’t as plush as a Tiguan or Golf on the road, the California will prove far more comfortable when you arrive at a destination.

An intriguing option for folks who want to hit the road, the Caddy California is a flexible – if expensive – starting point for overnight travel.