Want to stay slim? Turn your phone, TV and lights off before bed, scientists say 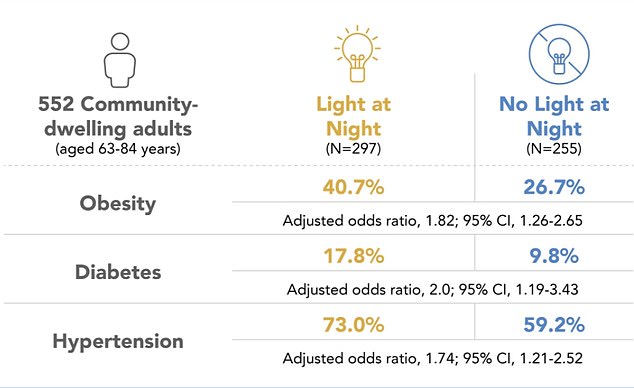 Want to stay slim? Turn your phone, TV and lights off before bed and sleep with a mask, scientists say

Turn your phone, TV and lights off before you go to bed if you want to stay slim.

For scientists have, once again, uncovered a link between exposure to light during sleep and obesity.

The latest evidence, purely observational, does not prove being that bright flashes while your eyes are shut make you fat. But proof that light at night fuels weight gain is rapidly piling up.

Academics recommend people wear masks at nights and fix blackout shades onto their windows, as well as turning off their devices.

And people who need a light on — such as the elderly — should only use a dim one close to the floor.

HOW DOES LIGHT AFFECT SLEEP AND WHAT CAN YOU DO?

Circadian rhythms are around 24-hours in length.

They vary from person to person – which is why some people are ‘morning people’ and others are ‘night owls’.

Natural factors within the body produce circadian rhythms as well as environmental signals such as daylight.

Irregular rhythms have been linked to various chronic health conditions, such as sleep disorders, obesity, diabetes and depression.

Exposure to light suppresses the secretion of melatonin, a hormone that influences circadian rhythms and helps with sleep.

Melatonin levels rise in the evening and stay elevated throughout the night, promoting sleep.

How can you reduce your exposure?

Having a BMI above 30 — defined as obesity — puts people at greater risk of type 2 diabetes, heart disease, and cancer.

Roughly a quarter of adults are obese in England but prevalence is closer to the 40 per cent mark in the US, figures suggest.

Researchers at Northwestern University in Illinois tracked 552 people, aged 63 to 84, in their study, published in the journal SLEEP.

Although the study only looked at older people, previous research has shown similar effects in younger generations.

Neurologist Dr Minjee Kim, study author, said: ‘Whether it be from one’s smartphone, leaving a TV on overnight or light pollution in a big city, we live among an abundant number amount of artificial sources of light that are available 24 hours of a day.’

All the volunteers were asked to track their light exposure — including at night — for a week.

Fewer than half consistently had a five-hour period of darkness, to the shock of the researchers.

Dr Kim and colleagues then checked if the participants where obese, suffered from diabetes or had high blood pressure to uncover any link.

Results showed 40.7 per cent of people exposed to light within the five-hour period were obese, compared to 26.7 per cent in the no-light group.

Around 17.8 per cent in the light exposure group had diabetes, twice as much as the other cohort (9.8 per cent). A similar difference was found between the groups when it came to rate of hypertension.

The differences were found to be significant when other potential risk factors were accounted for.

The study was observational, meaning the team could not prove light exposure was causing obesity, diabetes or hypertension.

Experts think, however, that falling asleep with the light on may confuse the body clock. This could disrupt hormone levels, which have a knock-on effect that can make people seek out more food.

But other experts have claimed the light emitted from Kindles and iPads is much weaker than natural light at dawn. They say the problem stems from the increased mental alertness required to use the devices.

Further research is need to prove the long-term effects of staring at screens at night on weight gain and its associated conditions, they said.

The hottest interior trends for summer 2022, according to an expert

I’m a dermatologist – here’s all the ways vaping is…