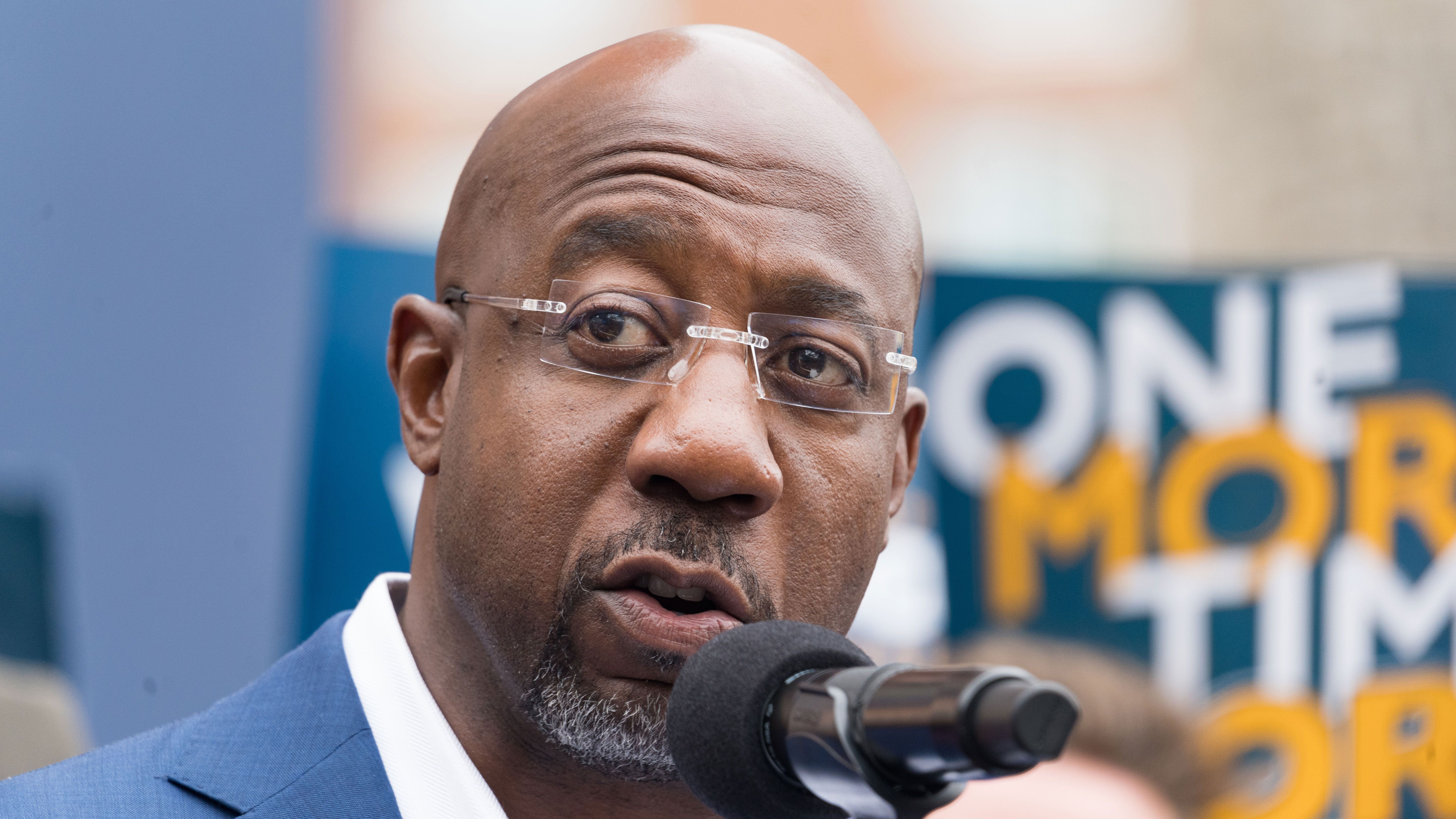 Sen. Raphael Warnock, D-Ga., was working as a youth pastor of a New York City church when it hosted Nation of Islam leader Louis Farrakhan.

From 1991 to 2001, Warnock served as youth pastor for six years and then assistant pastor for four years under the Rev. Calvin O. Butts at Abyssinian Baptist Church in Harlem, several years before he went on to lead the same Atlanta church where Dr. Martin Luther King Jr. preached: Ebenezer Baptist Church.

On Aug. 5, 1995, when Warnock was still a youth pastor, the church held a town hall meeting for discussion on Farrakhan’s forthcoming Million Man March to Washington, D.C., that October, the New York Beacon newspaper reported at the time.

Farrakhan reportedly sat on the Aug. 5 panel at Abyssinian along with other march organizers, including the Rev. Benjamin Chavis and radio host Bob Laws. Attendees reportedly included the late Black nationalist Queen Mother Moore and the late Black Panther and Nation of Islam leader Khalid Muhammad.

According to the Beacon’s reporting at the time, Muhammad had just been reinstated by Farrakhan as a minister in the Nation of Islam more than a year after calling Jews “bloodsuckers” of the Black community. Farrakhan had previously demoted Muhammad over the “tone” of his speech but acknowledged the “truths” in it, the New York Times reported at the time.

During Farrakhan’s 1995 event at the Abyssinian church, the Beacon reported, Butts gave the opening prayer before Chavis told the crowd, “People from all over the country are talking about the march.”

“Some gang members on the West Coast are even performing military drills in the streets in preparation for that day,” he reportedly said.

According to the report, “The attraction of the night was none other than Farrakhan, who electrified the crowd as he outlined the activities and goals of the March. Explaining how America is shifting to the ‘conservative right, not the righteous right,’ the Muslim leader said that the March will gain for the Black man, respect and advancement in the world by uniting themselves into a brotherhood to make demands on America for what is theirs. ‘You are not free if you still have to beg your enemy for what is yours,’ he said.”

Louis Farrakhan of the Nation of Islam speaks at Saint Sabina Church, May 9, 2019, in Chicago.
(AP)

Farrakhan and others reportedly outlined the goals of the Million Man March, which included the building of a new economy “that will become increasingly independent of White participation.”

“Also on the agenda will be the establishment of a national bank, the acquirement of land and the opening of manufacturing plants in Black communities,” the Beacon reported. “Any corporation currently benefiting from Black consumer dollars that refuse to heed the ‘Black Agenda’ will be boycotted nationwide.”

Warnock’s Senate office and re-election campaign did not respond to Fox News Digital’s inquiry asking whether the senator attended the town hall, participated in the march, which was held Oct. 16, 1995, or if he played any role in bringing Farrakhan to the church.

At the time of his first appearance at the Abyssinian church in 1991, Leonard Jeffries was embroiled in a legal battle to retain his position as the Black studies department chair at City University of New York (CUNY). He was ultimately removed from his position after a years-long dispute over racist and antisemitic remarks, including blaming Jewish people for the transatlantic slave trade and supporting Black supremacist ideals, like the theory that higher melanin levels make Black people inherently superior to White people.

Jeffries spoke about the CUNY controversy during an October 1991 speech at Abyssinian after a student reporter with the Harvard Crimson alleged that the professor had slammed the outlet as a “Jewish newspaper” during their interview, threatened the reporter’s life and had a bodyguard physically seize the audio recording of the interview, the New York Times reported at the time.

Jeffries reportedly told the church congregation that he sat down with the student reporter with the intention to discuss multicultural education issues, not the antisemitism controversy, and he did not deny the reporter’s accusations.

While Warnock began working at Abyssinian in 1991 after graduating from Morehouse College earlier that same year, it is unclear if he was working at the church at the time of Jeffries’s October speech.

Also in 1991, the American Jewish Committee (AJC) released a report on Jeffries “and the Antisemitic Branch of the Afrocentrism Movement,” highlighting several of the now-former professor’s comments on White people and Jews.

The AJC report said Jeffries “preaches Jew-hatred like a religion” and claimed that he organized a 1990 conference for Black teachers that featured Black nationalist and antisemitic rhetoric and reading materials.

In July 1991, three months before his first Abyssinian speech, Jeffries claimed that the portrayal of Black people in movies was “a conspiracy, planned and plotted and programmed out of Hollywood, where people [are] called Greenberg and Weisberg and Trigliani and what not,” the AJC report said.

The report also noted Jeffries’s racially charged rhetoric “teaching that blacks are racially superior to whites” and his references to Black people as “sun people” due to “more melanin in their skin than whites, whom he calls ‘ice people.’”

Jeffries appeared at the Abyssinian church again in February 1992, when Warnock was youth pastor, giving a speech about systemic racism and White-on-Black crime after a White police officer was acquitted in the shooting death of Black teenager Phillip Pannell, Newsday reported at the time.

“Black people are under siege,” Jeffries was quoted as saying.

In 1994, he was quoted by the New York Times as comparing Jewish White people to “skunks” who “stunk up everything.”

Abyssinian hosted Jeffries for a third time in July 1998, when Warnock was assistant pastor. Jeffries and his wife, Rosalind, performed the libation marking the passing of Black historian John Hendrik Clarke, the New York Beacon reported at the time.

In February 2012, during a Farrakhan event in Chicago, Jeffries was quoted as saying during a discussion panel prior to Farrakhan’s speech, “The evil genius of the Jewish community was to put together their powers to make business their religion and make it part of their culture.”

Butts, Abyssinian’s reverend, repeatedly defended Jeffries during the CUNY controversy. Butts separately came under fire in 1995 after his church hosted Cuban dictator Fidel Castro as a speaker, and Butts appeared to praise him, prompting chants of “Fidel! Fidel! Fidel!” from the audience.

Butts defended the decision to invite Castro, arguing it was “in our tradition to welcome those who are visionary, who are revolutionary and who seek the freedom of all of the people around the world.”

Butts also refused to condemn Farrakhan for calling Judaism a “gutter religion” in 1986, causing members of the New York Philharmonic orchestra to boycott the Abyssinian church.

Butts, who died in October of this year at age 73, once described Warnock as “one of the brightest and most intelligent and academically prepared young clergymen in the country.”

After his death, Warnock described Butts as his mentor.

Warnock has come under fire for his own praise of Farrakhan, who has called Jews “wicked,” “satanic” and has compared them to “termites.”

During a 2013 speech, Warnock praised Farrakhan’s Nation of Islam as an “important” voice for Black Americans.

“Its voice has been important for the development of Black theology,” Warnock said at the time, referring to an ideology developed by Black preachers during the Civil Rights era to combat White supremacy within Christianity.

The reverend said the Nation of Islam was necessary to “put a fire” under Black preachers and keep them “honest” about the message coming from their pulpits.

Warnock, who is nearing a runoff election against Republican Herschel Walker in Georgia on Dec. 6, did not respond to Fox News Digital’s earlier request for comment about Jeffries.

Jessica Chasmar is a digital writer on the politics team for Fox News and Fox Business. Story tips can be sent to [email protected]

Taraji P. Henson On The Importance Of Space Exploration And Her NASA Experience With Artemis I

Fact-checkers target Biden over ‘false and misleading’ statements about…