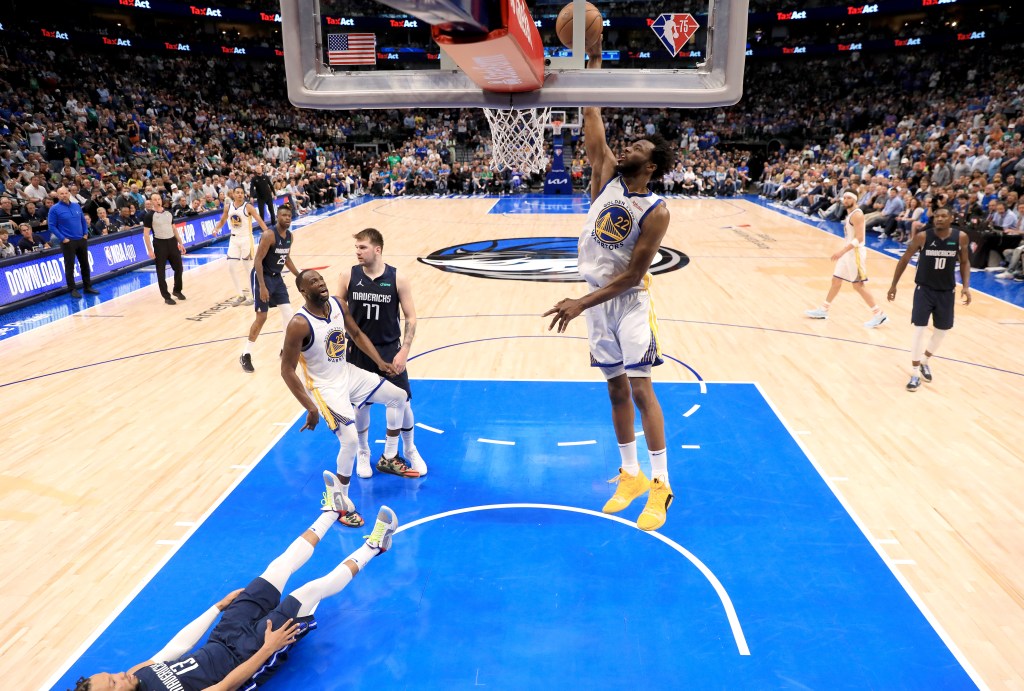 DALLAS — Andrew Wiggins isn’t the flashiest or loudest person, but the Warriors forward made a thunderous statement Sunday night in Game 3 of the Western Conference finals.

Wiggins flew through the air to throw down a nasty dunk over Mavericks star Luka Dončić in the fourth quarter on Sunday night, sending the 23-year-old to the ground. Wiggins was initially whistled for an offensive foul, which he vehemently disagreed with.

Coach Steve Kerr won the challenge, but not before the dunk of the 2022 NBA Playoffs was played on a loop on the American Airlines Center’s jumbotron.

ANDREW WIGGINS EXPLODES TO THE RIM ON TNT 🤯 pic.twitter.com/p18kLhcf1p

“Yeah, it was an amazing dunk,” Kerr said after Golden State’s 109-100 victory over Dallas. “We’ve seen Wiggs do that before where if he gets a head of steam and he gets that two-foot jump, he’s so explosive… I was surprised at the call but glad we had the challenge left.”

“That’s always our battle cry to him, forget laying the ball up, go dunk. He’s been attacking like that all playoffs,” Green said. “He got a couple posters these playoffs. That one was on Luka… when you get a poster on a superstar like that, it means just a little bit more.”

Stephen Curry and Klay Thompson both said it was their favorite Wiggins’ dunk of all time.

Thompson added, “His head was at the rim. That was just incredible.”

Even Dončić was a good sport about it, giving props to Wiggins for his highlight reel-worthy showing.

“I mean, I got hit a little bit, but that was impressive, I’m not going to lie,” Dončić said. “I saw the video again, I was like, ooh. That was pretty incredible. I wish I had those bunnies.”

And the praises didn’t stop there.

Former Warriors guard Baron Davis, who posterized Andrei Kirilenko in the second round of the 2007 playoffs, gave Wiggins his stamp of approval in a pair of tweets.

Juan Toscando-Anderson took to Instagram with an edit of Wiggins’ face on Davis’ as he pulled up his jersey after the insane dunk from 15 years ago.

It also was the chatter of the Twitterverse, with both current players — like the Nets’ Seth Curry and Nuggets’ Jamal Murray — and former players like Davis and his We Believe-era teammate Matt Barnes chiming in. Even Magic Johnson called it the “dunk of the year.”

Andrew Wiggins is playing the best basketball I’ve ever seen him play!! He had the dunk of the year over Doncic and his Playoff high 27 points and 11 rebounds tonight in the Warriors 109-100 victory.

Offensive foul or not… Dunk of the year!

Wiggins said he didn’t really have any immediate thoughts during the throw down but was “just feeling the energy.”

“When I seen the rim, that’s all I seen,” Wiggins said. “They tried to take it away from me but Steve challenged and we won. Thank him for that.”

The dunk punctuated a career night for Wiggins, who has continued to elevate his game in the playoffs. He scored a playoff career-high 27 points in the Warriors’ win and finished a game-best plus-22, while adding 11 rebounds and three assists to help Golden State take a 3-0 series lead.

Wiggins said the key to his postseason success has been “staying locked in, staying aggressive.

And he’s at the top of his game this postseason.

Wiggins has gone from being an inefficient high-volume scorer to a team player lauded for his stifling defense and aggressive rebounding. Tasked with being the primary defender on Dončić, Wiggins has smothered the Slovenian, making every possession difficult for him.

Dončić is averaging 34 points per game while shooting 45.3% from the field. But he’s also -61 this series, the worst plus-minus for the Mavericks. Wiggins has posted a team-best +66 this series.

“He’s a fantastic two-way player. You don’t win in the playoffs without guys like Wiggs,” Kerr said. “We’re basically mirroring Dončić’s minutes so that Wiggs can stay on him and he’s another guy like Steph who just never seems to get tired. He’s in amazing shape.

“Wiggs, it’s been a brilliant year for him and it’s continued in the postseason.”

Aft Cabin to the fore in stunning return to racing

People are just noticing three Sky TV tricks everyone should…