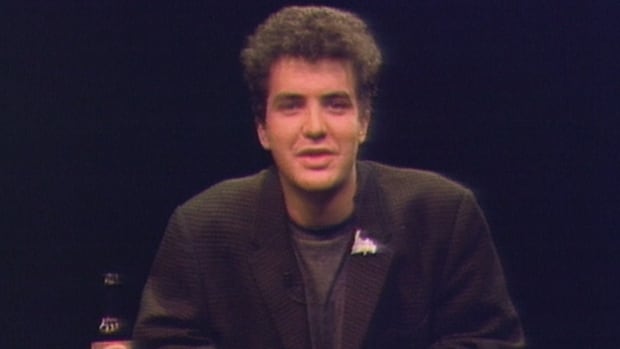 And he’s been making Canadians laugh for a long time. From 2004 to 2018, he starred on The Rick Mercer Report (initially Rick Mercer’s Monday Report) and before that, he was a founding cast member of CBC’s This Hour Has 22 Minutes. He was with the show from 1993 to 2001.

But even further back, Mercer was earning national attention. On Feb. 6, 1991, Mercer was a guest on CBC-TV’s Midday to discuss his new play, Show Me the Button: I’ll Push It (or Charles Lynch Must Die). The show, which premiered at the National Arts Centre in Ottawa in October 1990, was inspired by a controversial column by the journalist Charles Lynch. It was the Meech Lake era, and in Lynch’s opinion, Newfoundland was expendable insofar as Canadian Confederation was concerned. Mercer was of a different mind, and in March of 1991, the play earned praise from the Globe and Mail‘s theatre critic Ray Conlogue. As Conlogue wrote at the time: the show was a “comic battering ram that Mercer wields against a Canada he sees as arrogant, bullying and dismissive of himself and his people.”

During Mercer’s Midday appearance he was joined by Lynch. Both men stated their positions on the program. Mercer, then 21, said he felt that Newfoundland’s input wasn’t sought amid discussions of the Meech Lake Accord in 1990. The play had been his response.

Playwright Rick Mercer gives a scathing commentary on the airline in light of its new policy on lost luggage. Aired Oct. 14, 1992 on CBC’s Midday.

Early in 1993, Mercer was a guest on the CBC late-night talk show Friday Night! with Ralph Benmergui to perform a scene from that play. During a chat with the host, hee said playwriting was an ongoing pursuit for him.

“The National Arts Centre of Canada has commissioned myself and Gerald Lunz, who’s also the producer-director of I’ve Killed Before, to write a new play for their ’94 season,” he said.

According to the National Arts Centre website, Mercer’s play Canada: A Good Place to Hide reached the stage in 1995.

Canadians get to know the young playwright from Newfoundland on a CBC talk show. Aired on Feb. 5, 1993 on CBCs Friday Night! with Ralph Benmergui.