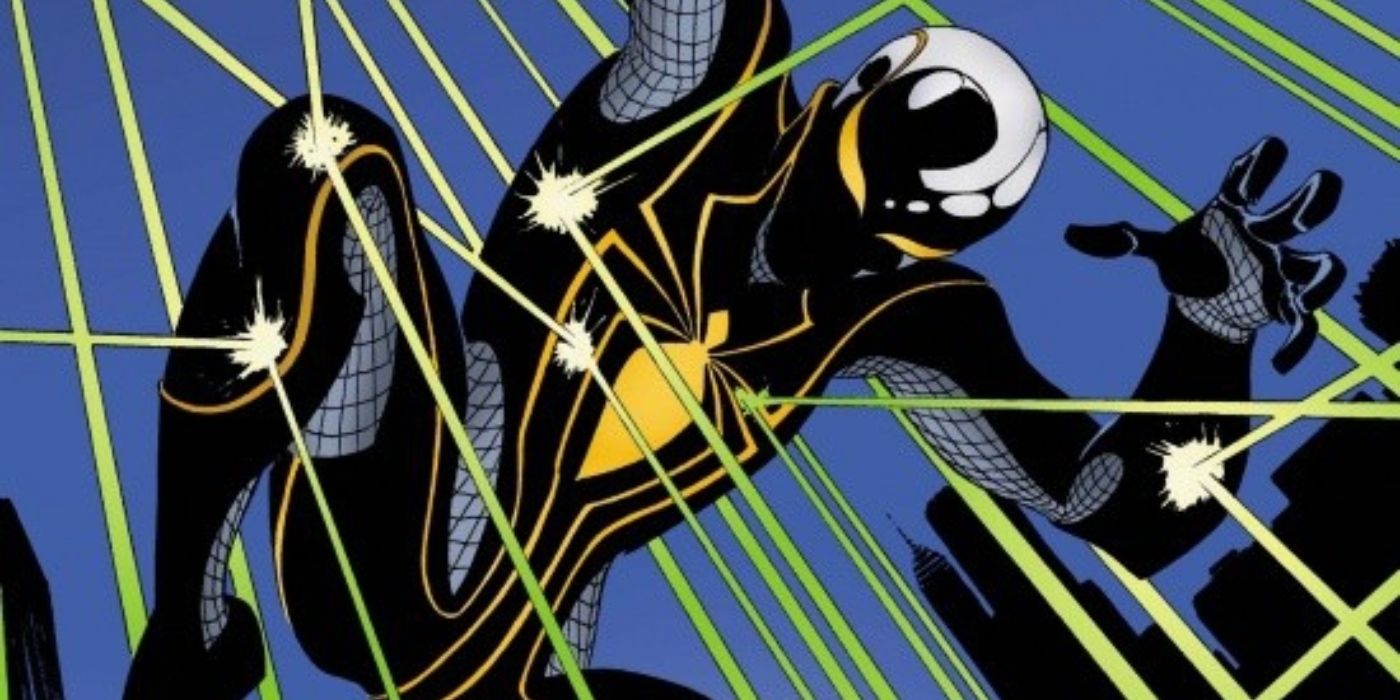 Next to Iron Man, Spider-Man might just have the deepest wardrobe in the Marvel Universe. From the stealth costume that he wore during his “Big Time” era to the sleek symbiote costume, the wall-crawler has worn dozens of costumes over the years. And in Spider-Man: No Way Home, he dons a black-and-gold suit that turns out to be nowhere nears as mysterious as the trailers implied. However, while that Marvel Cinematic Universe suit doesn’t have an exact match in comics, one of Spider-Man’s costumes from Dan Slott’s Amazing Spider-Man run provided Peter Parker with his very first black-and-gold costume.

Spider-Man lost his Spider-Sense during a battle with the Scorpion in 2011’s The Amazing Spider-Man #654, by Slott, Fred Van Lente, Stefano Caselli, Marte Garcia and Joe Caramagna. He was forced to activate a shockwave to stop the threat of the incoming Spider-Slayers. While his plan worked, it inadvertently removed his own Spider-Sense, and he had to learn how to operate without it.

Peter Parker learned how truly important his Spider-Sense was during The Amazing Spider-Man #656, by Slott, Marcos Martin, Muntsa Vicente and Caramagna. The relatively obscure villain Massacre held up a bank with an excess of hostages. Massacre has no regard for human life and repeatedly did away with his hostages to prove he was in control. Spider-Man tried to apprehend the villain but was instead hit by a barrage of bullets. Although he was relatively unharmed, he had to find a new way to stop Massacre, which is how his new suit came into play.

Peter Parker returned to Horizon Labs, where he retrieved his newest costume, the Spider-Armor MK II. The suit proved to be the perfect solution to Massacre. He found the villain holding his former coworkers hostage at a law firm. Spider-Man launched himself through a window and immediately covered the hostages in webs. These webs blocked all radio frequencies, which prevented Massacre from detonating the bombs that would’ve taken out hostages. Thus, he tried to shoot at the hostages instead. Peter had learned from his recent bullet wound and made the suit bulletproof. The yellow Spider logo even appears to catch Massacre’s eye and draw gunfire to the protected area not unlike Batman’s yellow Bat-Symbol.

As a last result, Massacre blasted Spider-Man with a grenade launcher, but his efforts still proved fruitless. Spider-Man was still standing and quickly apprehended the criminal. When the police still tried to fire at the unarmed Massacre, Spider-Man was able to deflect all of their shots as well. Peter Parker wore this suit immediately after the death of Marla Jameson where he adopted the motto “No one dies.” This went for villains as well, and the Spider-Armor MK II was the perfect suit to protect individuals from any sort of disaster. It even fixed the weight issue that the original Spider Armor suffered from and allowed Spider-Man to move at his normal speed.

With a costume this powerful, one might assume Spider-Man would adopt this suit permanently. However, that was not the case. While working at Horizon, Peter Parker developed a multitude of suits with different abilities. He would not trade in the Spider-Armor for a stronger suit though. Before the Human Torch died, he asked Spider-Man to take his place on the Fantastic Four. Spider-Man designed an entirely new costume for himself in the style of the Fantastic Four but the Thing was disgusted with it. Since Johnny Storm died, they had retired the Fantastic Four and were going by the Future Foundation instead. They provided Spider-Man with a new white suit and he began working alongside them.

Peter Parker would never wear the MK II Spider-Armor ever again. It was revealed that Spider-Man had a closet full of different Spider-Man costumes in The Amazing Spider-Man #698, by Slott, Richard Elson, Antonio Fabela and Chris Eliopoulos, and the Spider-Armor had been stored there ever since his battle with Massacre. The suit was seemingly destroyed along with Horizon Labs during the events of Superior Spider-Man #19, by Slott, Ryan Stegman, John Livesay, Edgar Delgado and Chris Eliopoulos. While the Spider-Armor MK II did make an appearance in Marvel’s Spider-Man for PS4, there’s been no indication that Spider-Man has reconstructed it since its destruction.

KEEP READING: Spider-Man: Why the Lizard Is Marvel’s Most Cold-Blooded Monster

The Batman Gets an Even Earlier HBO Max Release Date