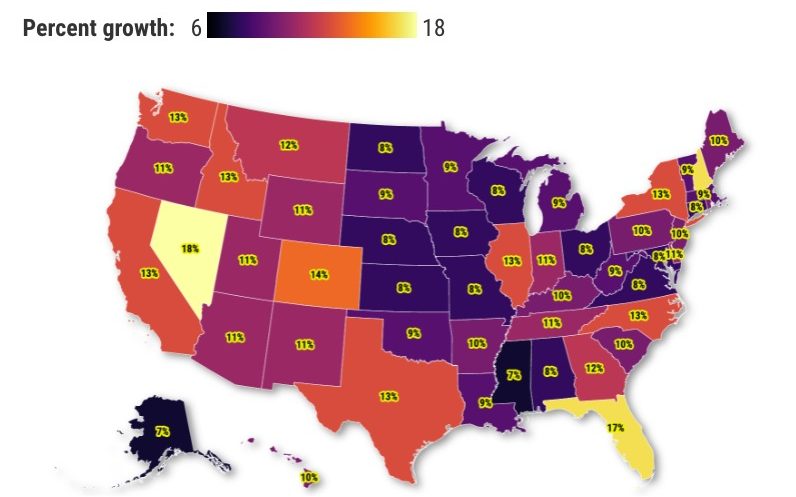 ”Survey says” looks at various rankings and scorecards judging geographic locations while noting these grades are best seen as a mix of artful interpretation and data.

Buzz: The state known for gambling was a worker’s best bet as 2021 ended as the economy continued its recovery from the pandemic’s business chill.

Source: My trusty spreadsheet reviewed one of my favorite jobs numbers — the quarterly tally by the Bureau of Labor Statistics compiled from employers records, not a monthly survey. (So, it’s slow to come out, but more accurate.)

For this scorecard, hiring and wage patterns were combined into “payroll growth,” seeking the states where bosses increased staffing and pay by the largest combined amount in the 12 months ended in December.

Your employers upped their collective paychecks in the fourth quarter by 18% vs. the end of 2020 — a jump in workers and salaries bigger than any other state.

How did we get to these rankings? Take a look inside the data …

California, the largest US job market, ranked third for growth at 7.4%. Don’t forget, though, the reference point is late 2020 when the state was fairly locked down due to pandemic restrictions.

Top job growth? Nevada at 11.5% and Hawaii at 9.2% topped California. (Does anybody notice a tourism theme here?) Then came New Jersey at 6.8%, and Florida at 6.7%. (Do people willingly visit New Jersey?)

The other factor in the rankings was the pace of pay hikes. The biggest 12-month jump in average weekly wages as of December was found in New Hampshire at 12.3%, then Florida at 9.7%, Colorado at 7.8%, North Carolina at 7.8% and Wyoming at 7.7%.

The gyrations of the “fun” businesses within this data — and other pay stats, too — cannot be ignored.

Remember, large gatherings returned to favor in the second half of 2021. But also note the ensuing rehiring spree was in typically low-paying leisure and hospitality industries.

California had the nation’s largest leisure and hospitality job additions, with 413,404 workers added in 12 months ended in September, the latest comparable stats available.

Next, ponder the “fun” industry’s average weekly wage in California of $723 — fourth-highest in the nation but 54% below the state’s overall pay of $1,576.

It’s a good bet that 2020’s loss of low-wage jobs probably overinflated that year’s pay metrics. Conversely, 2021’s refilling of positions in those niches may be understating what’s really happening with paychecks.

It’s almost time for mid-term elections and a referendum on President Joe Biden’s first two years in the White House. And folks vote with their wallets, yes?

Jonathan Lansner is the business columnist for the Southern California News Group. He can be reached at [email protected]

Akhilesh Yadav: ‘Should have learned something from his uncle Shivpal ji’, Adityanath slams SP chief over his ‘gobar’ remarks