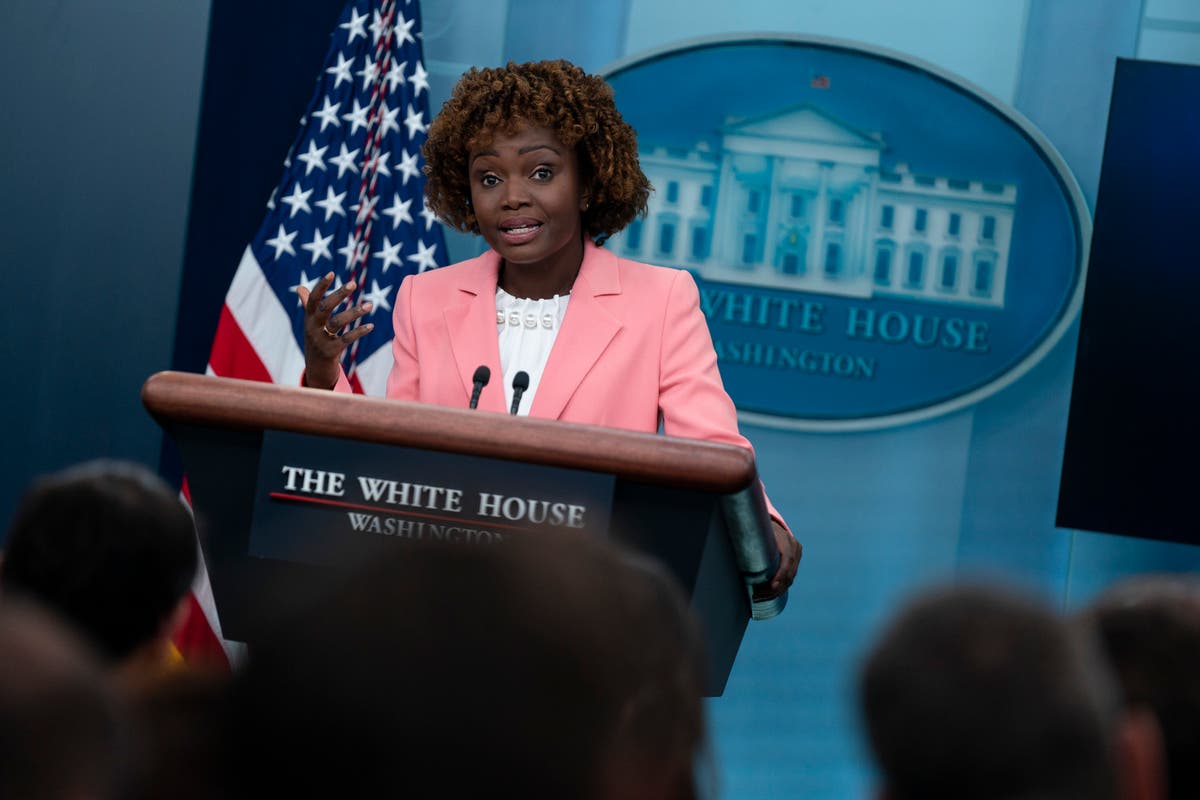 The White House had searing words for the oil-producing nations of Opec+ on Wednesday following news that the bloc would cut oil production by 2m barrels per day.

Speaking with reporters aboard Air Force One, Karine Jean-Pierre called the decision “short-sighted” and a “mistake”, while adding that it showed a clear decision by the trading bloc to line up against the US and the west.

“Opec’s decision to cut productions quotas is short sighted. while the global economy is dealing with the continued negative impact of Putin’s invasion of Ukraine,” said Ms Jeane-Pierre.

“It’s clear that Opec+ is aligning with Russia with today’s announcement,” she added to reporters.

Ms Jean-Pierre did not go as far as to call it a “hostile act” following a question from a reporter, but reiterated that it was a mistake and on its face made in Opec’s own self-interest.

The White House also announced in a separate, longer statement released to journalists that it would be exploring avenues through Congress to respond to the production cut while working to further boost domestic production.

“The President is also calling on U.S. energy companies to keep bringing pump prices down by closing the historically large gap between wholesale and retail gas prices — so that American consumers are paying less at the pump,” read that statement from economic adviser Brian Deese and national security adviser Jake Sullivan.

“In light of today’s action, the Biden Administration will also consult with Congress on additional tools and authorities to reduce Opec’s control over energy prices,” they continued.

Ms Jean-Pierre said that another shipment of oil from the strategic reserve would be released to the market next month.

Some analysts speculated that the announcement by Opec to cut its production rate for the first time since the beginning of the Covid pandemic would revive calls to pass so-called “Nopec” legislation in Congress. Senator Chuck Grassley, a Republican from Iowa, is currently author of a bill that would allow the US attorney general to take antitrust action against oil-producing organisations that consists of multiple foreign states.

The timing of Opec’s announcement could be catastrophic for Democrats. Voters are set to decide which parties will control the House and Senate in just a few weeks, and polls throughout the 2022 campaign season have consistently shown that gas prices, inflation and the economy as a whole remain at the top of their concerns.

In recent weeks, election analysts have started to give Democrats a credible chance of maintaining a majority in the House while potentially even making gains in the Senate. A late-game surge in gas prices could evaporate those recent gains by the president’s party.

Gas prices dropped like a rock after reaching historic highs earlier in the summer, but are once again creeping back up. An analysis from AAA blames a surge in domestic demand and continued supply issues as the main culprits, making today’s announcement all that more painful.

Joe Biden’s White House has sought to take credit for the drop in gas prices over the past few months and on Wednesday many including some on Capitol Hill were questioning what use the president’s decision to resume outreach to Saudi Arabia, Opec’s largest producer, was if it did not result in more favourable decisions by the oil alliance.

Senator Chris Murphy, a Democrat, was one of the first to react to the news: “I thought the whole point of selling arms to the Gulf States despite their human rights abuses, nonsensical Yemen War, working against US interests in Libya, Sudan etc, was that when an international crisis came, the Gulf could choose America over Russia/China,” he wrote on Twitter.

Man is beaten and robbed of cash and £19,000 Rolex after he fell for dating app…