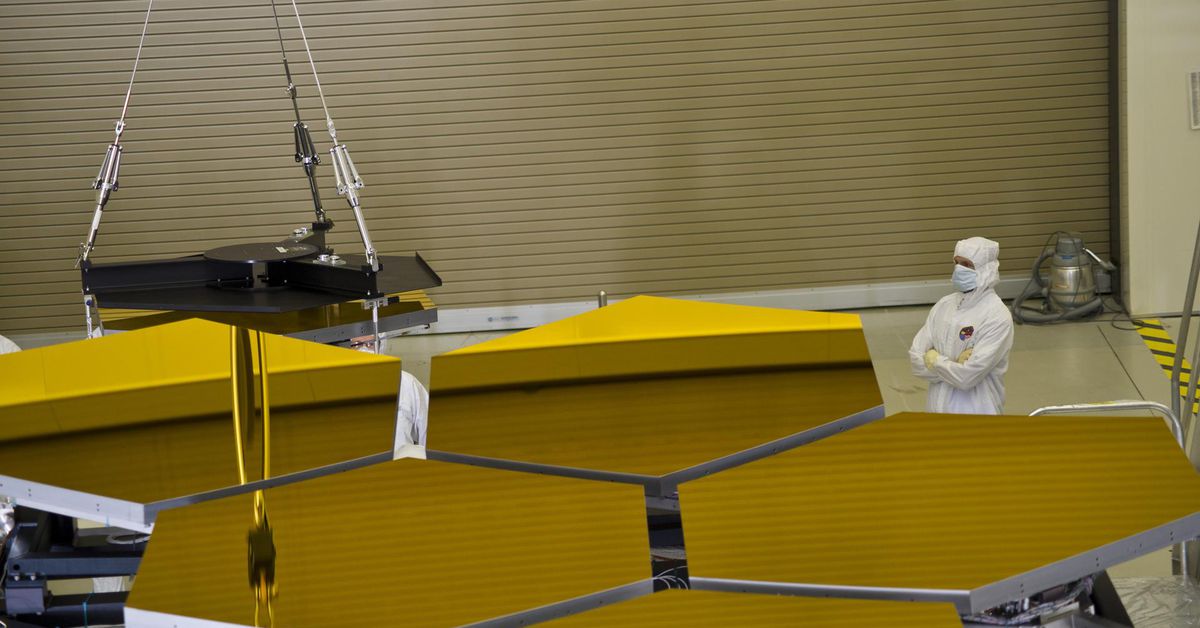 On June 8th, NASA revealed that its new powerful space observatory, the James Webb Space Telescope, is now sporting a small dimple in one of its primary mirrors after getting pelted by a larger-than-expected micrometeoroid out in deep space. The news came as a bit of a shock since the impact happened just five months into the telescope’s space tenure — but such strikes are simply an inevitable aspect of space travel, and more thwacks are certainly on their way.

Despite what its name implies, space isn’t exactly empty. Within our Solar System, tiny bits of space dust are zooming through the regions between our planets at whopping speeds that can reach up to tens of thousands of miles per hour. These micrometeoroids, no larger than a grain of sand, are often little pieces of asteroids or comets that have broken away and are now orbiting around the Sun. And they’re everywhere. A rough estimate of small meteoroids in the inner Solar System puts their combined total mass at about 55 trillion tons (if they were all combined into one rock, it’d be about the size of a small island).

That means that if you send a spacecraft into deep space, your hardware is certain to get hit by one of these little bits of space rock at some point. Knowing this, spacecraft engineers will construct their vehicles with certain protections to shield against micrometeoroid strikes. They’ll often incorporate something called Whipple shielding, a special multi-layer barrier. If the shield is hit by a micrometeoroid, the particle will pass through the first layer and fragment even further, so the second layer is hit by even smaller particles. Such shielding is usually used around sensitive components of spacecraft for extra protection.

But with NASA’s James Webb Space Telescope, or JWST, it’s trickier. The telescope’s gold-coated mirrors must be exposed to the space environment in order to properly gather light from the distant Universe. And while these mirrors were built to withstand some impacts, they are more or less sitting ducks for larger micrometeoroid strikes, like the one that hit JWST in May. Though the micrometeoroid was still smaller than a grain of sand, it was larger than what NASA anticipated — enough to cause damage to one of the mirrors.

Spacecraft operators model the micrometeoroid population out in space to get a better understanding of how often a spacecraft might get hit in any given part of the Solar System — and what size particles might be thwacking their hardware. But even then, it’s not a foolproof system. “It’s all probability,” David Malaspina, an astrophysicist at the University of Colorado focusing on cosmic dust impacts on spacecraft, tells The Verge. “You can only say, ‘I have this chance of getting hit by this sized particle.’ But whether or not you ever do, that’s up to chance.”

Micrometeoroids have a wide range of origin stories. They can be the leftover products of high-speed collisions in space, which pulverize space rocks into minuscule pieces. Asteroids and comets also get bombarded over time by space particles and photons from the Sun, causing tiny pieces to break off. An asteroid can also get too close to a large planet like Jupiter, where the strong gravitational pull wrenches off pieces of the rock. Or an object can get too close to the Sun and get too hot, causing the rock to expand and break apart into pieces. There are even interstellar micrometeoroids that are just passing through our Solar System from more distant cosmic neighborhoods.

Micrometeoroids have a wide range of origin stories

How fast these particles move depends on what region of space they’re in and the path they take around our star, averaging about 45,000 miles per hour, or 20 kilometers a second. Whether or not they’ll run into your spacecraft also depends on where your vehicle lives in space and how fast it’s moving. For instance, NASA’s Parker Solar Probe is the closest human-made object to the Sun at the moment, moving at a top speed of more than 400,000 miles per hour. “It gets down to the 4-yard line, compared to Earth being all the way at one end zone,” says Malaspina, who has focused on studying micrometeoroid impacts on Parker Solar Probe. It’s also moving through the densest part of a region called the zodiacal cloud, a thick disk of space particles that permeates our Solar System. So the Parker Solar Probe is getting sandblasted more frequently than JWST— and it’s hitting these particles at incredibly high speeds than the telescope would get hit.

The Parker Solar Probe is giving us a better understanding of micrometeoroids around the Sun, but we have a pretty good understanding of the population around Earth, too. Whenever a micrometeoroid hits the upper atmosphere around our planet, it burns up and creates meteoric smoke — fine smoke particles that can be measured. The amount of this smoke can tell us how much dust is hitting Earth over time. Additionally, there have been experiments on the International Space Station, where materials have been mounted on the outside of the orbiting lab to see how often they’re bombarded.

While JWST lives roughly 1 million miles from Earth, that’s still relatively close by. Scientists also have an idea of what’s out there based on other missions sent to a similar orbit as JWST. And most of the stuff that hits the telescope isn’t that big of a deal. “Spacecraft get hit by little ones all the time,” Malaspina says. “By little, I mean fractions of a micron — much, much, much smaller than a human hair. And for the most part, spacecraft don’t even notice those.” In fact, JWST was already hit by small micrometeoroids four times before getting hit by the larger micrometeoroid in May.

“You just have to live with the probability that you will be hit eventually.”

NASA did model the micrometeoroid environment before JWST launched, but in light of the recent impact, the agency has convened a new team to refine their models and better predict what might happen to the telescope after future impacts. Current micrometeoroid modeling will try to predict things like how debris spreads through an orbit if an asteroid or comet breaks apart. That kind of debris is more dynamic, Malaspina says, making it harder to predict.

At the end of the day, though, prediction will simply give you more knowledge about when a spacecraft might get hit by a large speck of dust. One-off impacts like this are simply inevitable. JWST will continue to get blasted over time, but it was an eventuality that NASA was always prepared for. “You just have to live with the probability that you will be hit eventually by some sized dust particle, and you just do the best you can with the engineering,” says Malaspina.

These are the best tips for saving money easily this summer