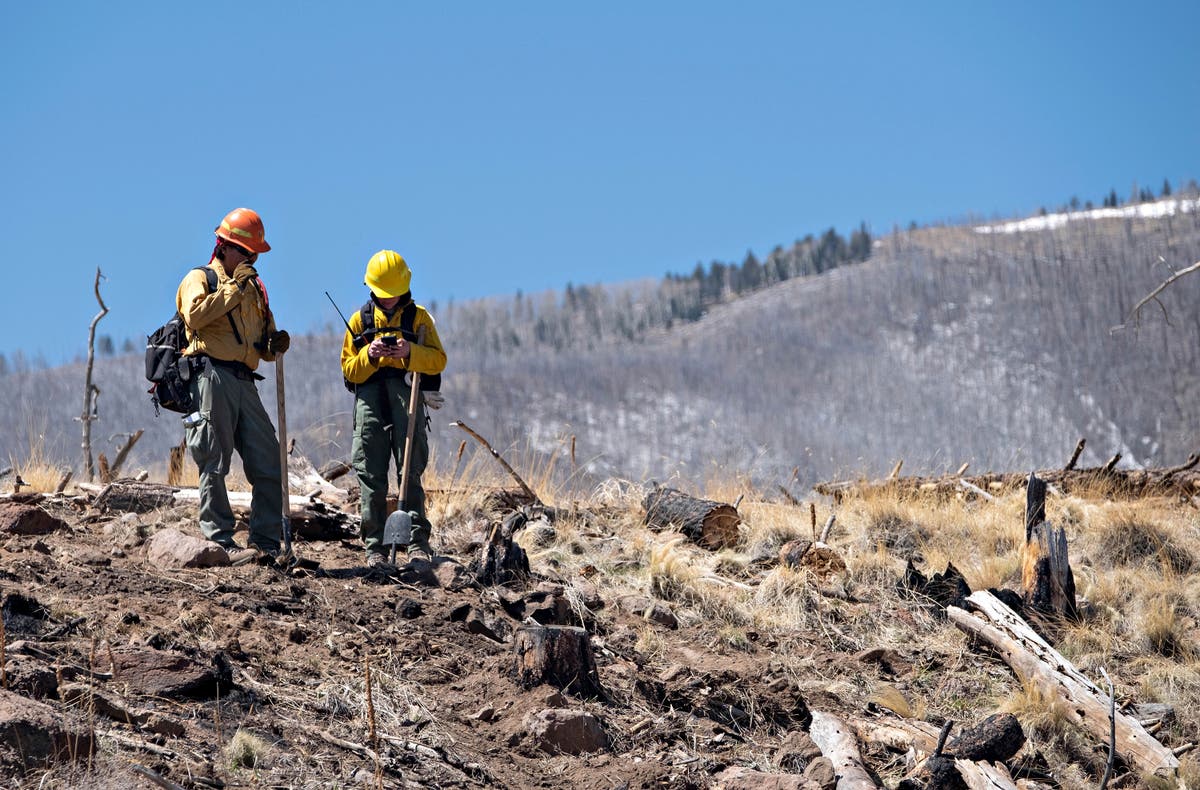 Wildfires are sweeping through the West and Southwest amid dry and windy conditions as the 2022 fire season roared to a vicious – and in many cases, early – start.

In New Mexico, two major fires combined, burning 54,000 acres since 19 April as nearly 500 personnel battled to stop the blazes, which were only contained on Sunday at 12 per cent, according to an update from New Mexico Fire Information, an interagency site.

Many roads in and around the areas were closed, and shelters were set up for residents already issued evacuation orders; the state is operating on a “Ready, set, GO!” system. Multiple communities that hadn’t already been given mandatory orders to leave remained at the previous two warning levels.

“Half the state has a fire issue,” New Mexico Gov. Michelle Lujan Grisham said Saturday, as more than 20 active wildfires burned in at least 16 of the state’s 33 counties, in the wake of winds that gusted up to 90 mph (145 kph) the previous day. At least 200 structures had been destroyed, she added.

With so many fires burning in April, well before the normal May or June start of the wildfire season, “our risk season is incredibly and dangerously early,” said the governor, who declared a state of emergency for several affected counties.

In Arizona, which has been battling the extensive Tunnel Fire for a week, many residents were returning to their homes on Sunday morning following the lifting of evacuation orders. They were warned to be vigilant, however, as firefighters struggled to contain the blaze, which had already burned 21,000 acres as of Saturday.

The Tunnel Fire started about 15 miles northeast of Flagstaff, and it claimed 30 homes, displacing dozens of families.

Seven hundred miles north in Colorado – which has been beset by wildfires since just before New Year’s Eve – crews were battling at least seven blazes over the weekend. Residents were still reeling from fires in and around Boulder County starting at the end of December which destroyed entire swathes of neighbourhoods.

The “number of red flag warnings that have been issued this April is higher than any April in at least the last 15 years,” the Denver Post reported last week.

Molly Mowery, executive director of the Littleton-based Community Wildfire Planning Center, told the Post that, in addition to climate change, conditions were worsened by “a century of ‘unchecked development’ and land management practices that suppress naturally occurring wildfires and allow plantlife and fire fuels to accumulate beyond normal amounts.

According to a UN Environment Programme (UNEP) Frontiers Report published earlier this year, “Dangerous wildfire weather conditions are projected to become more frequent and intense and to last longer, including in areas previously unaffected by fires” around the globe.

“This is due to climate change, including hotter temperatures and drier conditions with more frequent droughts. Land-use change is another risk factor, including commercial logging and deforestation for farms, grazing land, and expanding cities.”

In Colorado, experts and residents have been witnessing the phenomenon firsthand.

PICTURE EXC: Thandiwe Newton, 49, packs on the PDA with musician Lonr, 25, in Malibu