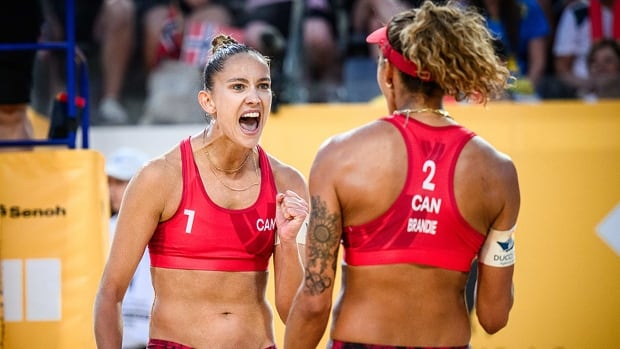 Second-seeded Eduarda (Duda) Lisboa and Ana Patricia Ramos of Brazil, who won three junior titles together, secured their first at the senior level after defeating Sophie Bukovec and Brandi Wilkerson of Toronto 21-17, 21-19 in an entertaining gold-medal match at the Foro Italico.

Wilkerson and Bukovec, the latter competing at her first FIVB beach worlds, were seeded 20th in the tournament and trying to follow 2019 champions and fellow Canadians Sarah Pavan and Melissa Humana-Paredes, who lost in the quarter-finals to Duda and Ana Patricia and placed fifth overall.

“The medal validates the hard work that we’ve put in this season,” said the 26-year-old Bukovec. “It gives us a bit of confidence that we are on the right track, and doing the right things to compete with the best in the world.”

In the bronze matchup earlier Sunday, Svenja Muller and Cinja Tillman of Germany were awarded the victory after Anouk Vergé-Depré and Joana Heidrich of Switzerland were forced to retire from the match up a set and leading in the second when Heidrich suffered an injury.

Meanwhile, Wilkerson’s best finish in her two previous world championship appearances was fifth in Vienna in 2017.

“We wouldn’t be competitors if we said we were satisfied,” Wilkerson said. “We of course wanted to walk away with the gold, but again, we’re doing the right things and are looking forward to continuing our journey as a team.”

Worlds was only the fourth tournament together for Bukovec and Wilkerson, who became on-court partners in February after the latter split from Heather Bansley.

They went undefeated in pool play, downing Switzerland, Italy, United States and France, and eliminated Thailand and Italy before Saturday.

The Canadians faced a tough test against Duda and Ana Patricia, who were playing in their third and second worlds, respectively, but neither had placed higher than ninth before this year.

After Duda and Ana Patricia pulled ahead 14-10 in the second set, the Canadians drew even after Duda touched the ball last in a net battle with Wilkerson before a Ana Patricia shot went out of bounds.

Brazil again went ahead by two points, only to watch Canada tie the set 16-16 when Wilkerson denied an Ana Patricia offering. The Canadian entered Sunday’s play second in blocks in the tournament behind Ana Patricia.

Bukovec and Wilkerson then grabbed the lead but Brazil won the next three points coming out of a timeout. Bukovec cut the deficit to one on a shot deep in the court, but Ana Patricia scored a point off the block to win the set.

Brazil built a 7-2 advantage in the opening set and never surrendered the lead.

Duda and Ana Patricia led by as many as six at 15-9 before the Canadians signalled for a timeout.

They tried to get back in the set, closing to within 19-16 on a Wilkerson tip shot inside the side line after a pair of outstanding defensive plays by Bukovec.

But a Wilkerson block went out of bounds and took away any momentum for the Canadians and Duda ended the set with a smart roll shot she sent the opposite way.

“I’m happy with the progress we’ve had in every match,” Ana Patricia said before Sunday’s final. “We’ll fight with everything we have for the gold medal, which would be very important for our team.”