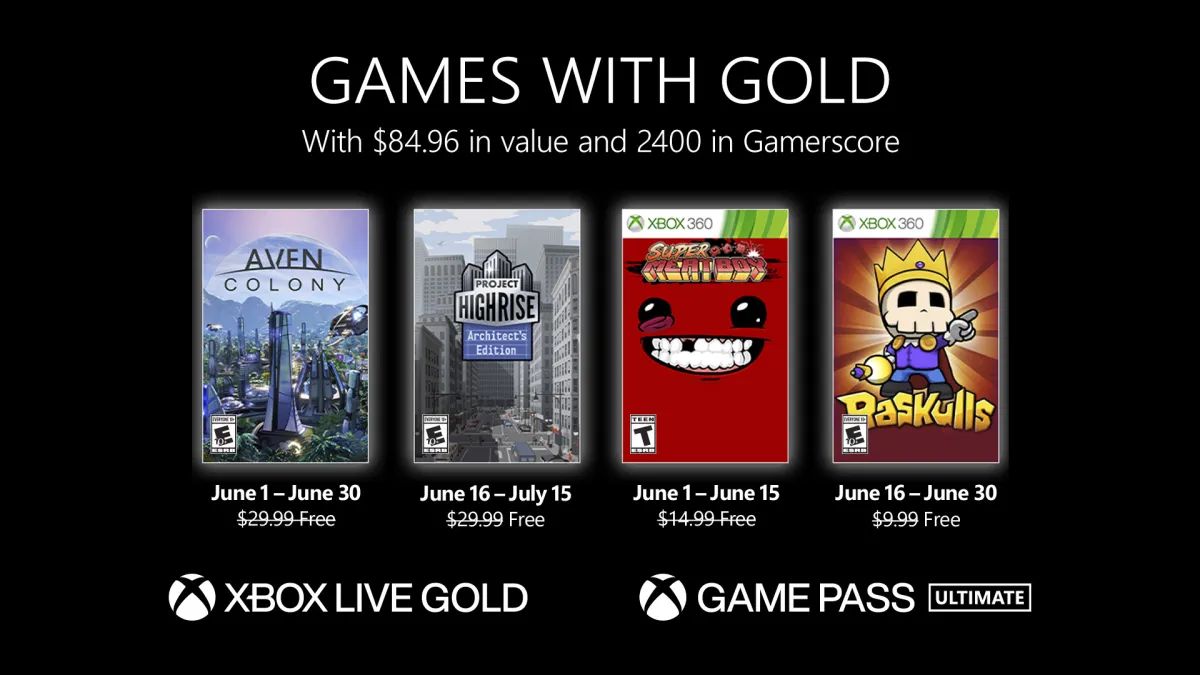 Microsoft revealed the games that will be granted in June to Xbox Live Gold and Xbox Game Pass Ultimate subscribers at no additional cost.

Today Microsoft revealed the new games that will be granted in June 2022 to Xbox Live Gold and Xbox Game Pass Ultimate subscribers at no additional cost.

If you’re not familiar with the games, you can read an official description for all of them below.

Build a new world and a life for humanity. It’s your job to develop Aven Colony on the strange new world of Aven Prime. Use construction drones to help your small settlements grow into massive cities. It won’t be easy. This exotic planet is filled with deserts, tundras, and teeming jungles. There are strange alien lifeforms and winter is coming which will freeze over the entire planet. Delve into your new home’s mysterious past by leading exploratory expeditions. Govern the growing populace using multiple overlay modes for crops, citizens, happiness, water and more. Life is difficult but the future can be bright if you make it so on Aven Colony.

You are the architect and the big metropolis is ready for your vision. Develop gleaming, majestic skyscrapers that will be the talk of the town. But a skyscraper is more than just steel and concrete, it’s a vibrant ecosystem filled with residents and workers. Keep everything running smoothly using your logistical skills. Entice and attract businesses, residents, tourists, convention goers and more. Explore open sandbox play or conquer campaign mode in 29 scenario challenges. The city awaits!

You’re not just any blob of meat. You are Super Meat Boy and you’ll do anything to save your beloved damsel in distress (who happens to be completely wrapped in bandages) from evil dressed up in a tux. Leap through caves and walls avoiding buzzsaws and needles in this streamlined platformer. Venture into the very depths of Hell itself for epic boss fights as you make your way through 300+ single player levels. It’s meaty good fun!

Get ready for a Raskulls Megaquest spanning 3 chapters and over 60 levels! Wield your block-breaking wands to get through every level as fast as you can. Collect your Boosties and feed your Frenzy bar for quick bursts of super speed. Enjoy multiplayer online or via couch play. Dive into this fun, quirky platformer filled with Shiny Stones, intergalactic buccaneers and cheese!

Keep in mind that, you still have time to redeem some of the titles of this month’s Games with Gold lineup before they are ultimately replaced.