Young a huge presence off the bench for Raptors 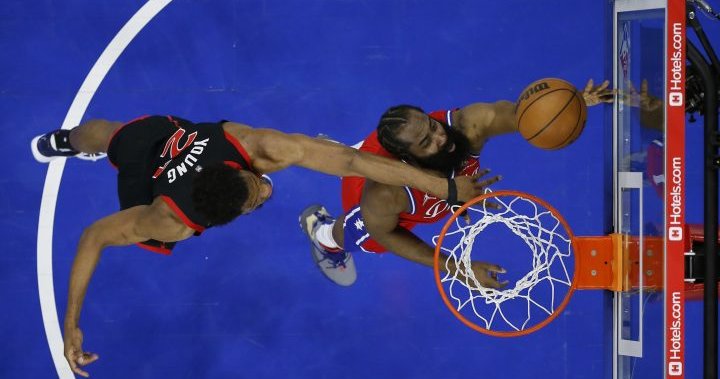 TORONTO – In one of the highlights of Saturday’s win over Philadelphia, Toronto Raptors veteran Thaddeus Young hit a step back jump shot that made Joel Embiid stumble and touch a hand down.

The play had the Raptors bench up on their feet howling with delight.

Coach Nick Nurse said the Raptors needed every player to contribute if they had a chance of beating of the 76ers in their first-round playoff series, and Young led the charge off the bench in Game 4, finishing with 13 points, five rebounds, five assists, and three steals.

He deflected praise, saying it was a team effort.

“We all came together and knew that it was win or go home, so put our minds to getting the job done,” Young said.

The Raptors will need all hands on deck in Game 5 at Wells Fargo Arena, as they could be without all-star guard Fred VanVleet in yet another elimination game. VanVleet is listed as questionable with a strained hip flexor.

Young, who has 55 post-season games with four different teams under his belt, was asked before the post-season tipped off about momentum shifts in series.

There was a palpable shift in the fourth quarter on Saturday. The Sixers unravelled and Joel Embiid lost his cool with the Raptors in his face all night.

“You can definitely feel when teams are starting to break down and starting to crack. And that’s when guys step up and start telling them like, ‘OK, this is our time, this is when we have to take advantage of it, we’ve got to put our foot down on their neck,’” Young said. “And when you feel that, that’s when you know you got ’em, and you know you have to take advantage of it.”

Those cracks can last more than a game, Young said.

The Raptors hope they can ride some momentum into Game 5, although the Sixers are excellent on their home court.

“Let’s go have some fun in Philly and see what we can do,” Nurse said on Saturday.

The 33-year-old Young was acquired by the Raptors in February and is proving his worth, both with his solid play on the floor and his veteran voice off it. He’s clearly liked by his teammates. When he threw down a huge dunk a few weeks ago, his teammates called him “Thad Young Legs,” a good-natured jab at his age.

He was tasked with guarding Embiid for chunks of Saturday’s game and did his part in thwarting the seven-footer.

What’s it like guarding the Sixers’ mountain of a man?

“You ever see two bears fight before?” said Young, who’s six foot eight, and at 220 pounds, gives up 60 pounds to the Sixers centre.

“He’s a big body, big strong guy. It’s not my first rodeo, my first time playing against him so understanding when he’s coming down the court, do your work early. … So I continue to do my work early, give him different looks on defence: front him, three-quarter him, play behind him and push him off the block, make sure he catches the ball as far out as possible.”

Embiid will be playing in pain for the rest of the series. Sixers coach Doc Rivers confirmed to Philadelphia media that the MRI on Embiid’s injured thumb revealed what the team had feared, a torn ligament.

Former Raptors guard Kyle Lowry played with a similar injury through the team’s championship run in 2019. He underwent surgery soon after.

Young, meanwhile, had two sons, Thaddeus Jr. and Taylor, join him in the media room for post-game interviews on Saturday.

“It’s always special to have them around because they get to see stuff other kids don’t see,” Young said. “They get to travel the world and come watch their dad play basketball. Their time is gonna come. I’m putting a lot of time into both of these little guys sitting in this crowd right here and just making sure I’m doing my best as a player and my best as a dad as well and as a husband.”

As for his highlight-reel play on Embiid, Young was asked who was the last player he’d crossed over so effectively.

“This knucklehead,” Young said, pointing at one of his sons with a laugh. “I’m sure everyone was going crazy. I’m more excited about the win. I’m happy we got that.”

The series would head back to Toronto for Game 6, if needed. Game 7 would be in Philadelphia.

Daily horoscope for April 25, 2022 – forecast for all star signs