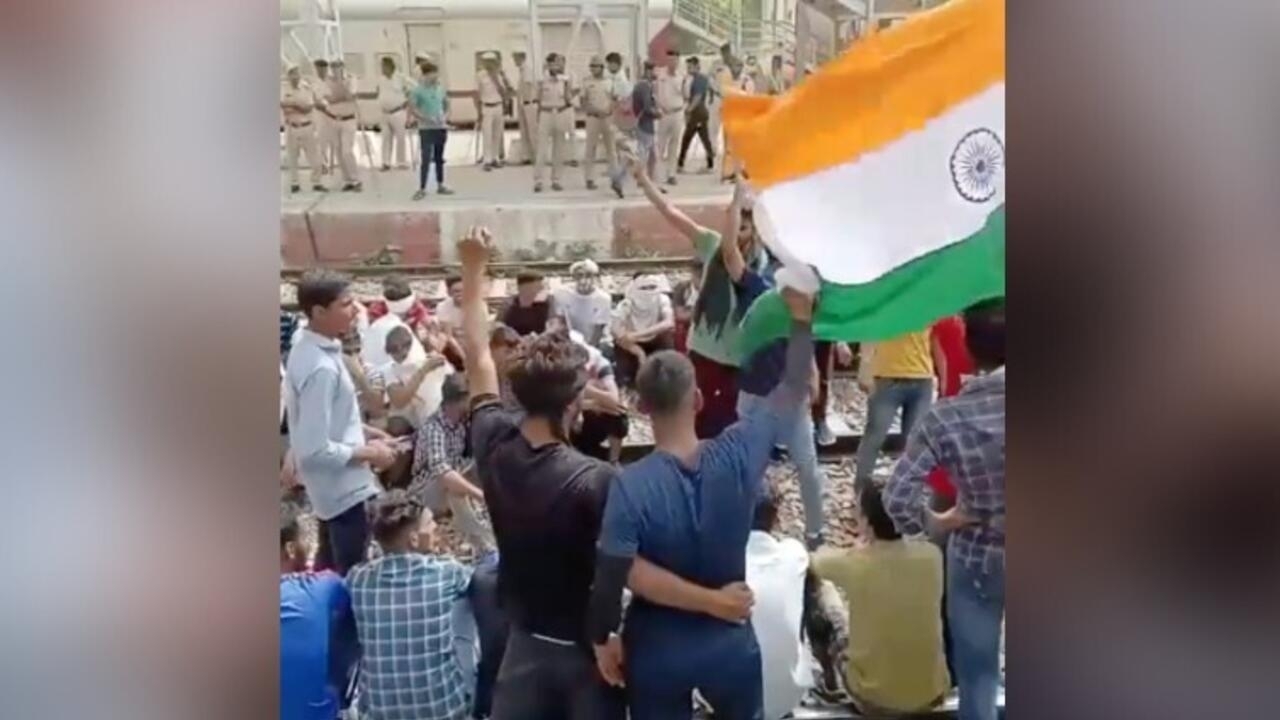 In India, young people who see the public sector as an avenue out of unemployment have been protesting a new army recruitment scheme that they say reduces job security. Videos of the protests on June 16 and 17 in the northeast show blockaded or destroyed railway stations as well as violent clashes with the police. Our Observer says these protests represent “the accumulated anger of the youth, at unemployment and economic distress”.

The protests have been particularly violent in India’s poorer northern states since the government unveiled a new army recruitment programme on June 14. In Telangana, where police opened fire on crowds, a 19-year-old man was killed on June 17. Numerous people have been injured in protests around the country.

Videos show protesters vandalising railway stations with stones and bamboo canes and setting trains on fire. The premises of the ruling BJP party in Bihar were also targeted on June 16 and 17.

Nonviolent protests were held across the country, supported by opposition parties, including the Congress party.

Several students who were preparing for recruitment into the army and had been found fit before the Covid-19 pandemic decided to march to Delhi from the city of Nagpur in West Bengal, about 1,000 kilometres away. They left on June 1, before the programme was announced.

The new programme, called “Agneepath”, was designed to make the army leaner and younger, as well as save money. It includes plans to recruit 50,000 young soldiers on four-year contracts, after which only a quarter of them would be retained in the armed forces.

It breaks with the old recruitment process, which allowed for 15 years of service in the army with a fixed income and substantial pension.

Anupam is the leader of “Yuva Halla Bol”, a nonviolent youth movement that has called for peaceful protests:

Many young people relied on the military sector to get a job. They prepared for it for several months, even years, physically and mentally. Recruitment stopped for more than two years, under the pretext of Covid.  Some had been waiting for a long time for recruiting to resume, there was a lot of anticipation and anxiety. But this new measure gives them a four-year contract, with no guarantees. For some of them it only postpones their arrival to unemployment.

‘Youth unemployment is a national problem’

In February 2022, violent protests broke out in India after the country’s largest employer, the public railway system, changed their hiring examination process.

As Anupam explains, the anger following both of these events is linked to the same root anxiety over the lack of professional prospects for youth, threatened by unemployment. The youth unemployment rate in India reached 26 percent in early 2022, a staggering figure for a country where more than half of the population is under 30 years old.

Youth unemployment is a national problem, but the Modi government is turning its back on the problem. Due to the decline of the economy in India, jobs, even in the private sector, have shrunk considerably. This has led the youth to seek jobs in the public sector. But the state and central governments have failed to ensure these jobs in a fair and timely manner.

This is the reason why the youth are extremely angry and protesting on the roads. The protests related to the army and the railway sector [last February]. This is an expression of a larger anger, the accumulated anger of the youth, at unemployment and economic distress.

Bihar, a very poor state in the northeast of India, has become the epicentre of the protests. As of June 20, the internet was cut in 20 districts in Bihar and more than 900 people had been arrested.

Anupam is originally from Bihar:

This is a state where young people depend heavily on government employment. Most people who want to work in the private sector leave Bihar for a better life, but for those who are stuck here, the only opportunities are government jobs.

‘We advocate nonviolence and respect for the constitution’

Anupam and several members of Yuva Halla Bol gathered in Delhi on June 16 to pay their respects to an aspiring soldier who had committed suicide that morning. He was arrested and detained for two days, during which time he says he was beaten and mistreated.

We did not have a sound system, or big prepared speeches. And we advocate nonviolence and respect for the constitution. All we wanted that day was to pay tribute to this young man, who died because of this new policy that is anti-youth.

[The government] wants to push us to protest with violence and thus discredit our message. They don’t want nonviolent movements, so they can say “look at these young people, they want to join the army, but they break everything, they have no respect”.


Yuva Halla Bol members protesting and getting arrested on June 16 in Delhi.

They cut off the internet in Bihar and put protesters in jail. But even if the government wants to muscle the youth, this sad series will continue until the government recognizes everyone’s right to work, including low-skilled workers.

To appease some of the anger, the government said that 10 percent of jobs in the defence ministry as well as 10 percent in federal police forces would be reserved for people who complete four years of the new military scheme.

On June 20, Prime Minister Narendra Modi said: “Several decisions look unfair at present. In time, those decisions will help in building the nation.”

Where To Stay, Shop, And Spa In Montreal

Thunder fever: Why thunderstorms can make hay fever worse – and how to cope