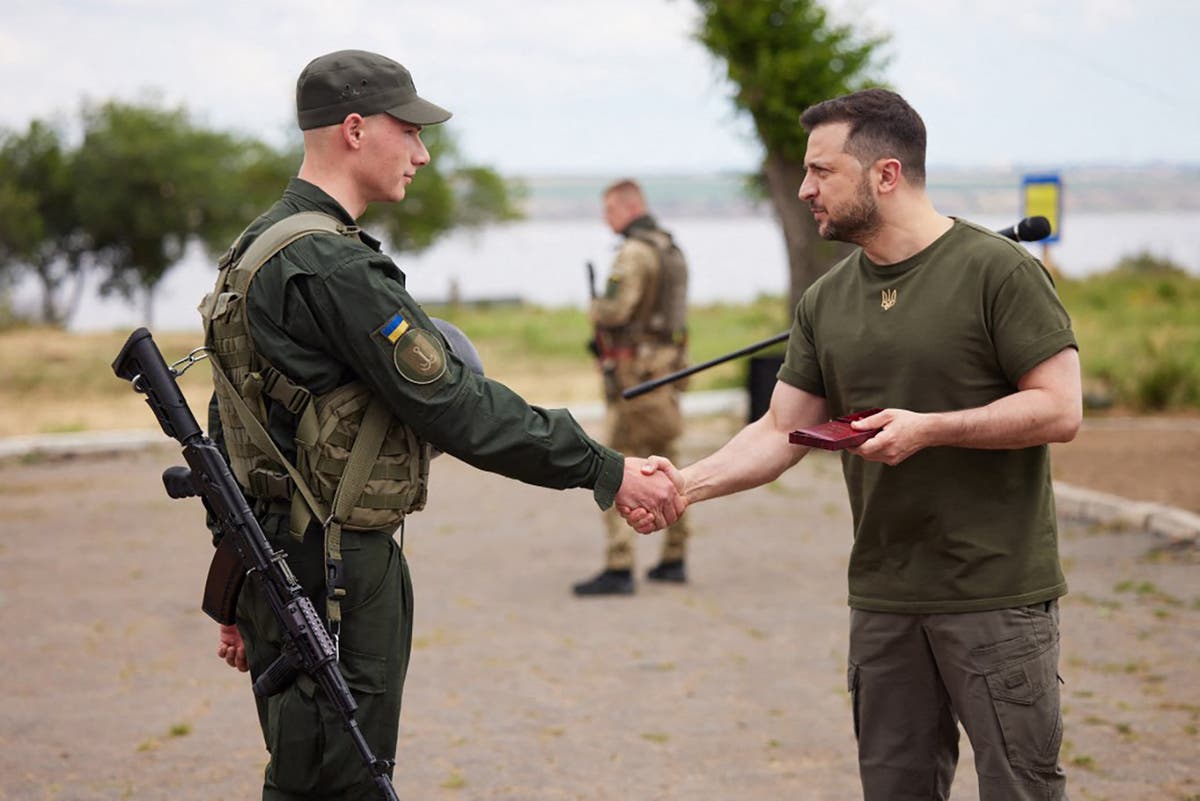 Volodymyr Zelensky has praised Ukraine’s “brave men and women” as he paid a visit to troops on the frontline of his country’s war against Russia.

A video posted to the president’s official Telegram account on Saturday showed him handing out medals and posing for pictures with troops in what appeared to be an underground shelter in the southern Mykolaiv region.

The president’s office did not say when he made his latest trip to see troops.

In recent weeks, the Ukrainian president has made unannounced visits to the northeastern city of Kharkiv where there had previously been heavy fighting, and to two eastern cities close to where battles are being fought.

The president’s office said Mr Zelensky also visited the regional capital Mykolaiv and inspected its destroyed administration building, where 37 people were killed in late March when a missile blasted through the building.

He also visited a hospital in Mykolaiv and awarded honours for bravery to Mayor Oleksandr Senkevych and governor Vitaliy Kim for their work during the four months of Russia’s invasion, his office said in separate statements.

His office underscored the strategic importance of the territory, which borders the Russian-occupied Kherson region.

“Mykolaiv region is a bridgehead for liberation of the Kherson region, which is a goal for every one of us,” said chief of staff Andriy Yermak on Telegram.

His office later said Mr Zelensky had also visited National Guard positions in the Odesa region, where he thanked the troops for their service, saying: “As long as you live, there is a strong Ukrainian wall that protects our country.”

Mr Zelensky’s visit comes after Russia increased efforts to gain full control of the frontline eastern city Sievierodonetsk, by sending over a large number of reserve troops from other battle zones.

Speaking on national television, Ukraine’s Luhansk regional governor Serhiy Gaidai said: “Today, tomorrow, or the day after tomorrow, they will throw in all the reserves they have… because there are so many of them there already, they’re at critical mass.”

He said Russian forces already controlled most but not all of Sievierodonetsk.

Boris Johnson, who visited Ukraine this week, said on Saturday the world must “steel ourselves for a long war”.

After returning from Kyiv, Mr Johnson said Vladimir Putin’s invasion was “entering a new phase” and if Russian advances were successful he “would not stop at dismembering Ukraine”.

Writing in The Times, Mr Johnson also outlined a four-point plan on how the UK and its allies can best support Ukraine.

He wrote: “I am afraid that we need to steel ourselves for a long war, as Putin resorts to a campaign of attrition, trying to grind down Ukraine by sheer brutality.

“The UK and our friends must respond by ensuring that Ukraine has the strategic endurance to survive and eventually prevail.”

On Friday, Russian troops freed a celebrated Ukrainian medic whose footage was smuggled out of the besieged city of Mariuopol by an Associated Press team.

Three months ago, Yulia Paievska was taken captive from the streets of the city after she used a body camera to record her team’s efforts over two weeks to save the wounded, including both Russian and Ukrainian soldiers.

Ms Paievska is known in Ukraine as Taira, a nickname she chose in the World of Warcraft video game. She transferred the clips to an Associated Press team, the last international journalists in the Ukrainian city of Mariupol, one of whom fled with it embedded in a tampon on 15 March

Ms Paievska and a colleague were taken prisoner by Russian forces on 16 March.

Upon her release, her husband Vadim Puzanov told the Associated Press: “It was such a great sense of relief. Those sound like such ordinary words, and I don’t even know what to say.”

President Zelensky announced Ms Paievska’s release in a national address, and said: “I’m grateful to everyone who worked for this result. Taira is already home. We will keep working to free everyone.”

You have to make most of your day in the sun